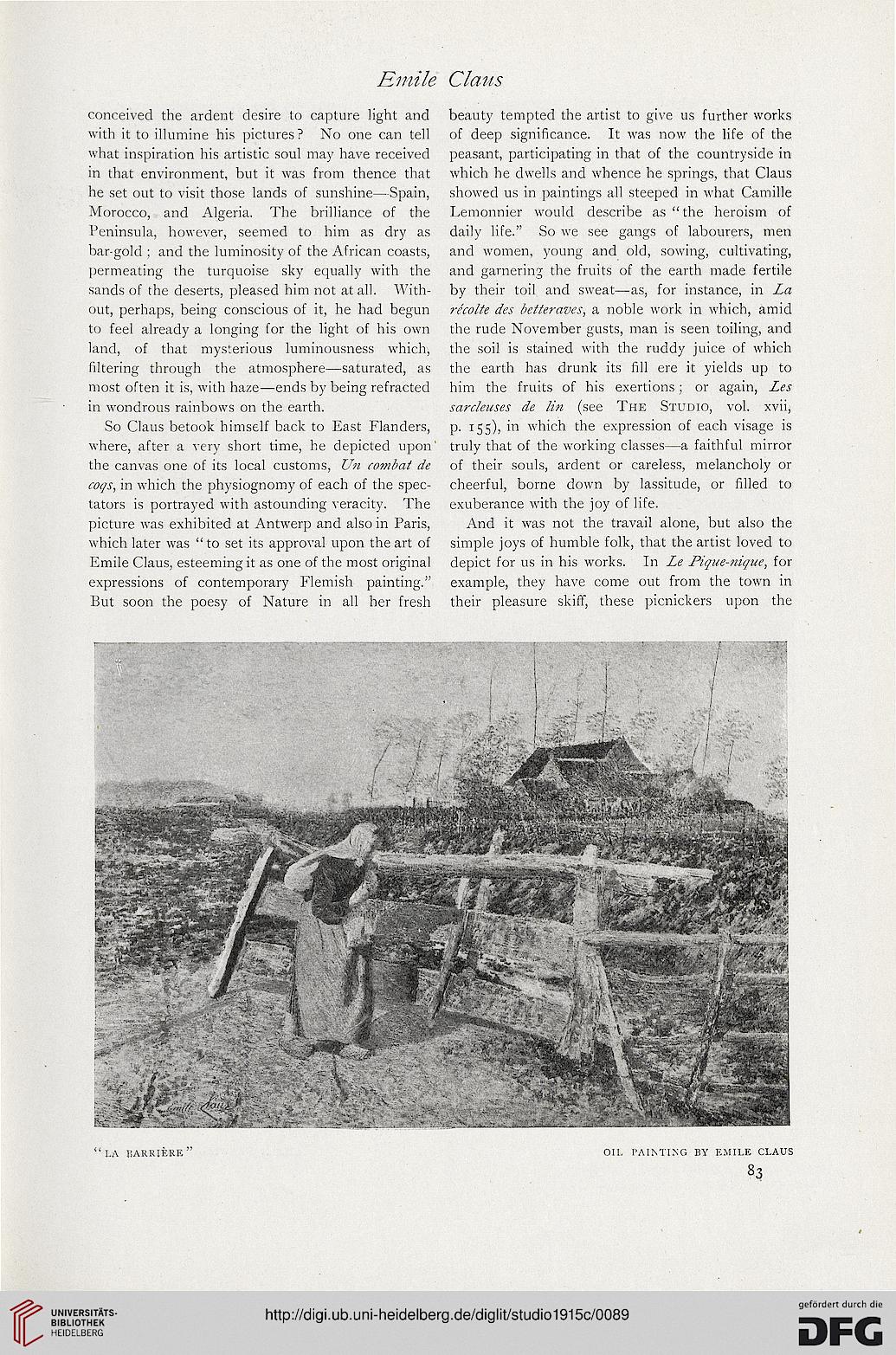 conceived the ardent desire to capture light and
with it to illumine his pictures ? No one can tell
what inspiration his artistic soul may have received
in that environment, but it was from thence that
he set out to visit those lands of sunshine—Spain,
Morocco, and Algeria. The brilliance of the
Peninsula, however, seemed to him as dry as
bar-gold ; and the luminosity of the African coasts,
permeating the turquoise sky equally with the
sands of the deserts, pleased him not at all. With-
out, perhaps, being conscious of it, he had begun
to feel already a longing for the light of his own
land, of that mysterious luminousness which,
filtering through the atmosphere—saturated, as
most often it is, with haze—ends by being refracted
in wondrous rainbows on the earth.

So Claus betook himself back to East Flanders,
where, after a very short time, he depicted upon
the canvas one of its local customs, Un combat de
coys, in which the physiognomy of each of the spec-
tators is portrayed with astounding veracity. The
picture was exhibited at Antwerp and also in Paris,
which later was “ to set its approval upon the art of
Emile Claus, esteeming it as one of the most original
expressions of contemporary Flemish painting.”
But soon the poesy of Nature in all her fresh

beauty tempted the artist to give us further works
of deep significance. It was now the life of the
peasant, participating in that of the countryside in
which he dwells and whence he springs, that Claus
showed us in paintings all steeped in what Camille
Lemonnier would describe as “ the heroism of
daily life.” So we see gangs of labourers, men
and women, young and old, sowing, cultivating,
and garnering the fruits of the earth made fertile
by their toil and sweat—as, for instance, in La
recolte des betteraves, a noble work in which, amid
the rude November gusts, man is seen toiling, and
the soil is stained with the ruddy juice of which
the earth has drunk its fill ere it yields up to
him the fruits of his exertions; or again, Les
sarcleuses de bin (see The Studio, vol. xvii,
p. 155), in which the expression of each visage is
truly that of the working classes—a faithful mirror
of their souls, ardent or careless, melancholy or
cheerful, borne down by lassitude, or filled to
exuberance with the joy of life.

And it was not the travail alone, but also the
simple joys of humble folk, that the artist loved to
depict for us in his works. In Le Pique-nique, for
example, they have come out from the town in
their pleasure skiff, these picnickers upon the