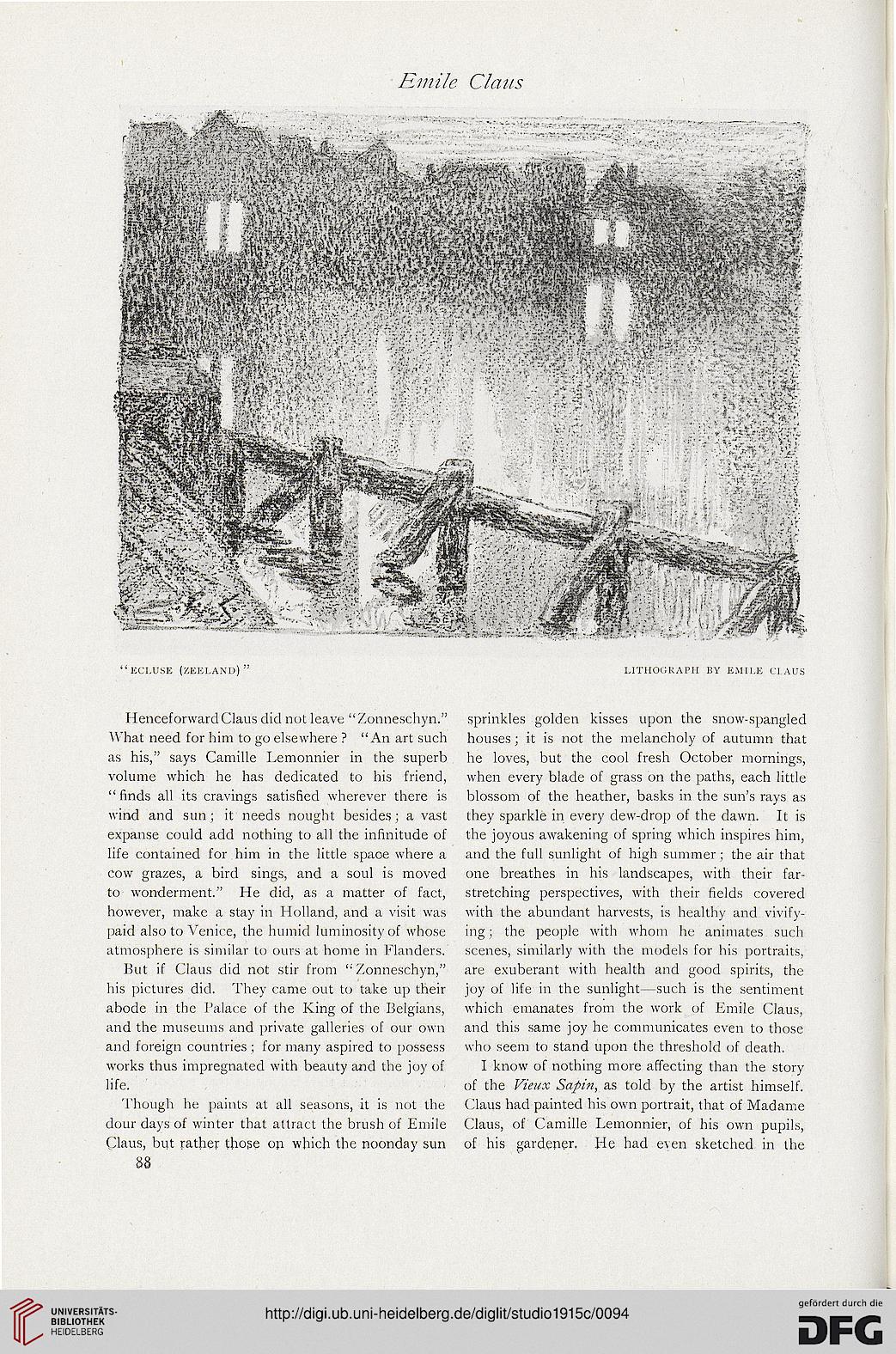 Henceforward Claus did not leave “Zonneschyn.”
What need for him to go elsewhere ? “An art such
as his,” says Camille Lemonnier in the superb
volume which he has dedicated to his friend,
“ finds all its cravings satisfied wherever there is
wind and sun; it needs nought besides; a vast
expanse could add nothing to all the infinitude of
life contained for him in the little spaoe where a
cow grazes, a bird sings, and a soul is moved
to wonderment.” He did, as a matter of fact,
however, make a stay in Holland, and a visit was
paid also to Venice, the humid luminosity of whose
atmosphere is similar to ours at home in Flanders.

But if Claus did not stir from “ Zonneschyn,”
his pictures did. They came out to take up their
abode in the Palace of the King of the Belgians,
and the museums and private galleries of our own
and foreign countries ; for many aspired to possess
works thus impregnated with beauty and the joy of
life.

Though he paints at all seasons, it is not the
dour days of winter that attract the brush of Emile
Claus, but rather those op which the noonday sun
88

sprinkles golden kisses upon the snow-spangled
houses; it is not the melancholy of autumn that
he loves, but the cool fresh October mornings,
when every blade of grass on the paths, each little
blossom of the heather, basks in the sun’s rays as
they sparkle in every dew-drop of the dawn. It is
the joyous awakening of spring which inspires him,
and the full sunlight of high summer; the air that
one breathes in his landscapes, with their far-
stretching perspectives, with their fields covered
with the abundant harvests, is healthy and vivify-
ing; the people with whom he animates such
scenes, similarly with the models for his portraits,
are exuberant with health and good spirits, the
joy of life in the sunlight—such is the sentiment
which emanates from the work of Emile Claus,
and this same joy he communicates even to those
who seem to stand upon the threshold of death.

I know of nothing more affecting than the story
of the Vieux Sapin, as told by the artist himself.

(llaus had painted his own portrait, that of Madame
Claus, of Camille Lemonnier, of his own pupils,
of his gardener, He had even sketched in the