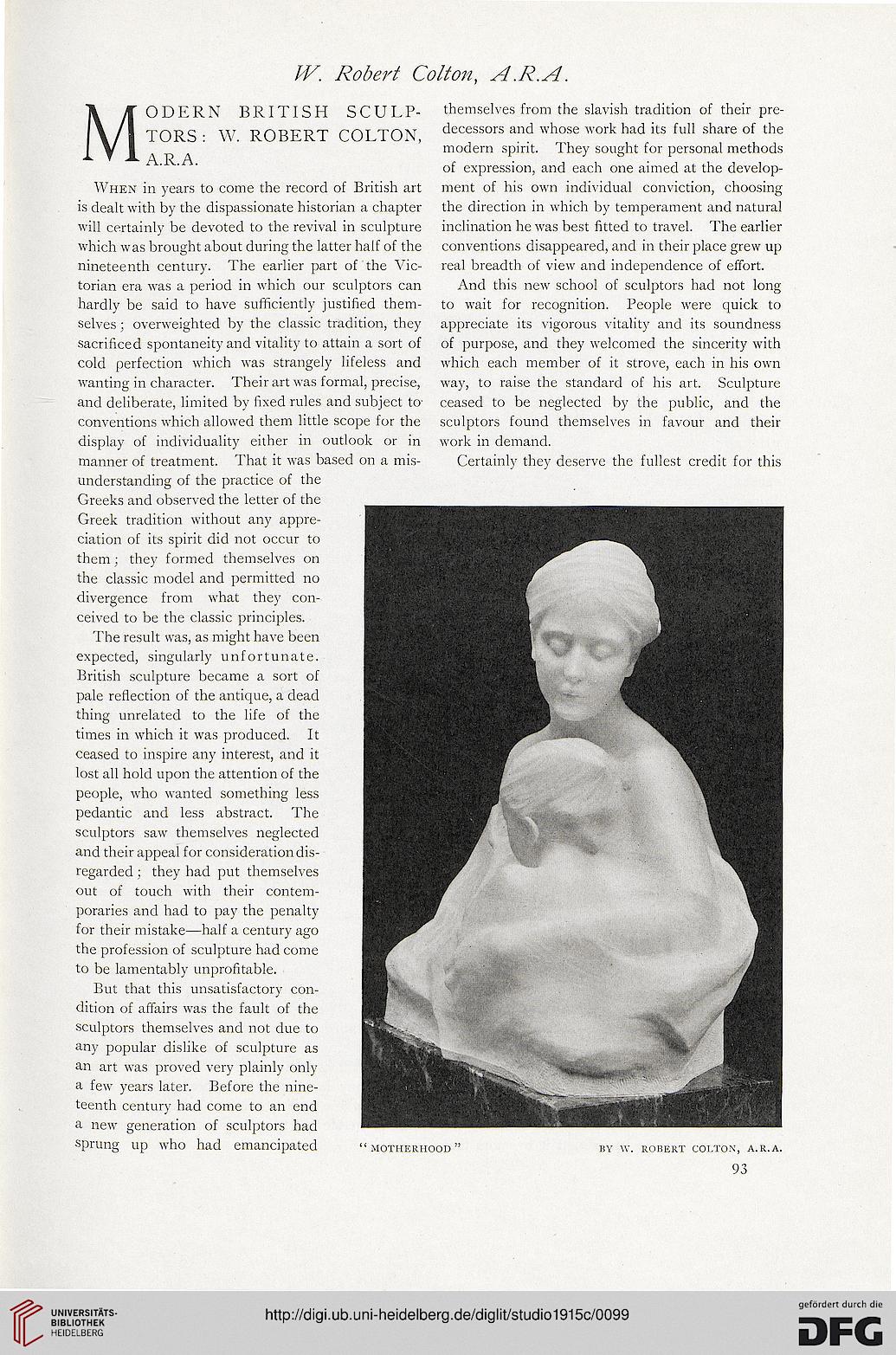 When in years to come the record of British art
is dealt with by the dispassionate historian a chapter
will certainly be devoted to the revival in sculpture
which was brought about during the latter half of the
nineteenth century. The earlier part of the Vic-
torian era was a period in which our sculptors can
hardly be said to have sufficiently justified them-
selves ; overweighted by the classic tradition, they
sacrificed spontaneity and vitality to attain a sort of
cold perfection which was strangely lifeless and
wanting in character. Their art was formal, precise,
and deliberate, limited by fixed rules and subject to-
conventions which allowed them little scope for the
display of individuality either in outlook or in
manner of treatment. That it was based on a mis-
understanding of the practice of the
Greeks and observed the letter of the
Greek tradition without any appre-
ciation of its spirit did not occur to
them; they formed themselves on
the classic model and permitted no
divergence from what they con-
ceived to be the classic principles.

The result was, as might have been
expected, singularly unfortunate.

British sculpture became a sort of
pale reflection of the antique, a dead
thing unrelated to the life of the
times in which it was produced. It
ceased to inspire any interest, and it
lost all hold upon the attention of the
people, who wanted something less
pedantic and less abstract. The
sculptors saw themselves neglected
and their appeal for consideration dis-
regarded ; they had put themselves
out of touch with their contem-
poraries and had to pay the penalty
for their mistake—half a century ago
the profession of sculpture had come
to be lamentably unprofitable.

But that this unsatisfactory con-
dition of affairs was the fault of the
sculptors themselves and not due to
any popular dislike of sculpture as
an art was proved very plainly only
a few years later. Before the nine-
teenth century had come to an end
a new generation of sculptors had
sprung up who had emancipated

themselves from the slavish tradition of their pre-
decessors and whose work had its full share of the
modern spirit. They sought for personal methods
of expression, and each one aimed at the develop-
ment of his own individual conviction, choosing
the direction in which by temperament and natural
inclination he was best fitted to travel. The earlier
conventions disappeared, and in their place grew up
real breadth of view and independence of effort.

And this new school of sculptors had not long
to wait for recognition. People were quick to
appreciate its vigorous vitality and its soundness
of purpose, and they welcomed the sincerity with
which each member of it strove, each in his own
way, to raise the standard of his art. Sculpture
ceased to be neglected by the public, and the
sculptors found themselves in favour and their
work in demand.

Certainly they deserve the fullest credit for this