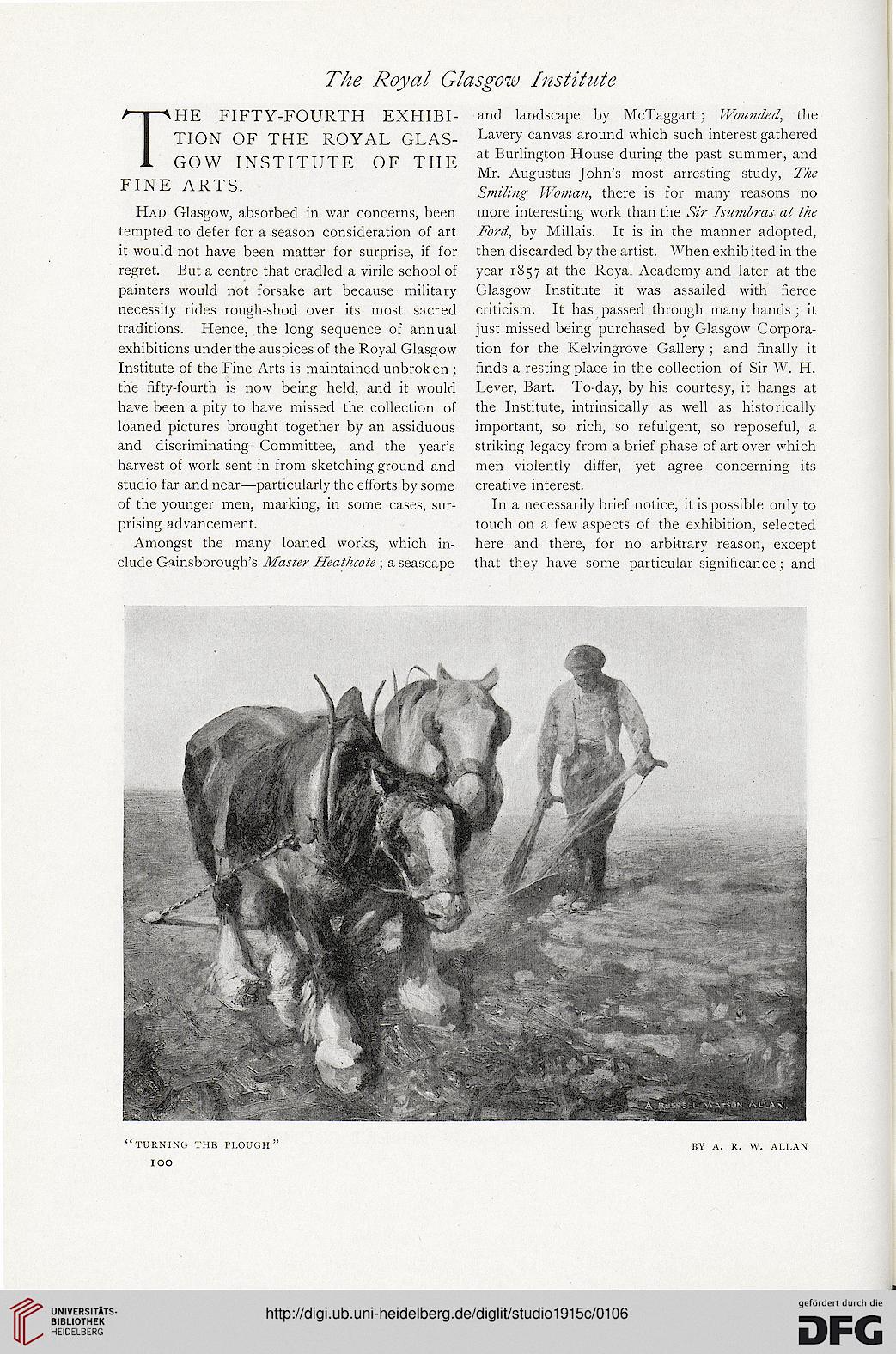 The fifty-fourth exhibi-
tion OF THE ROYAL GLAS-
GOW INSTITUTE OF THE
FINE ARTS.

Had Glasgow, absorbed in war concerns, been
tempted to defer for a season consideration of art
it would not have been matter for surprise, if for
regret. But a centre that cradled a virile school of
painters would not forsake art because military
necessity rides rough-shod over its most sacred
traditions. Hence, the long sequence of annual
exhibitions under the auspices of the Royal Glasgow
Institute of the Fine Arts is maintained unbroken ;
the fifty-fourth is now being held, and it would
have been a pity to have missed the collection of
loaned pictures brought together by an assiduous
and discriminating Committee, and the year’s
harvest of work sent in from sketching-ground and
studio far and near—particularly the efforts by some
of the younger men, marking, in some cases, sur-
prising advancement.

Amongst the many loaned works, which in-
clude Gainsborough’s Master Heathcote; a seascape

and landscape by McTaggart; Wounded, the
Lavery canvas around which such interest gathered
at Burlington House during the past summer, and
Mr. Augustus John’s most arresting study, The
Smiling Woman, there is for many reasons no
more interesting work than the Sir Isumbras at the
Ford, by Millais. It is in the manner adopted,
then discarded by the artist. When exhibited in the
year 1857 at the Royal Academy and later at the
Glasgow Institute it was assailed with fierce
criticism. It has passed through many hands ; it
just missed being purchased by Glasgow Corpora-
tion for the Kelvingrove Gallery; and finally it
finds a resting-place in the collection of Sir W. H.
Lever, Bart. To-day, by his courtesy, it hangs at
the Institute, intrinsically as well as historically
important, so rich, so refulgent, so reposeful, a
striking legacy from a brief phase of art over which
men violently differ, yet agree concerning its
creative interest.

In a necessarily brief notice, it is possible only to
touch on a few aspects of the exhibition, selected
here and there, for no arbitrary reason, except
that they have some particular significance; and