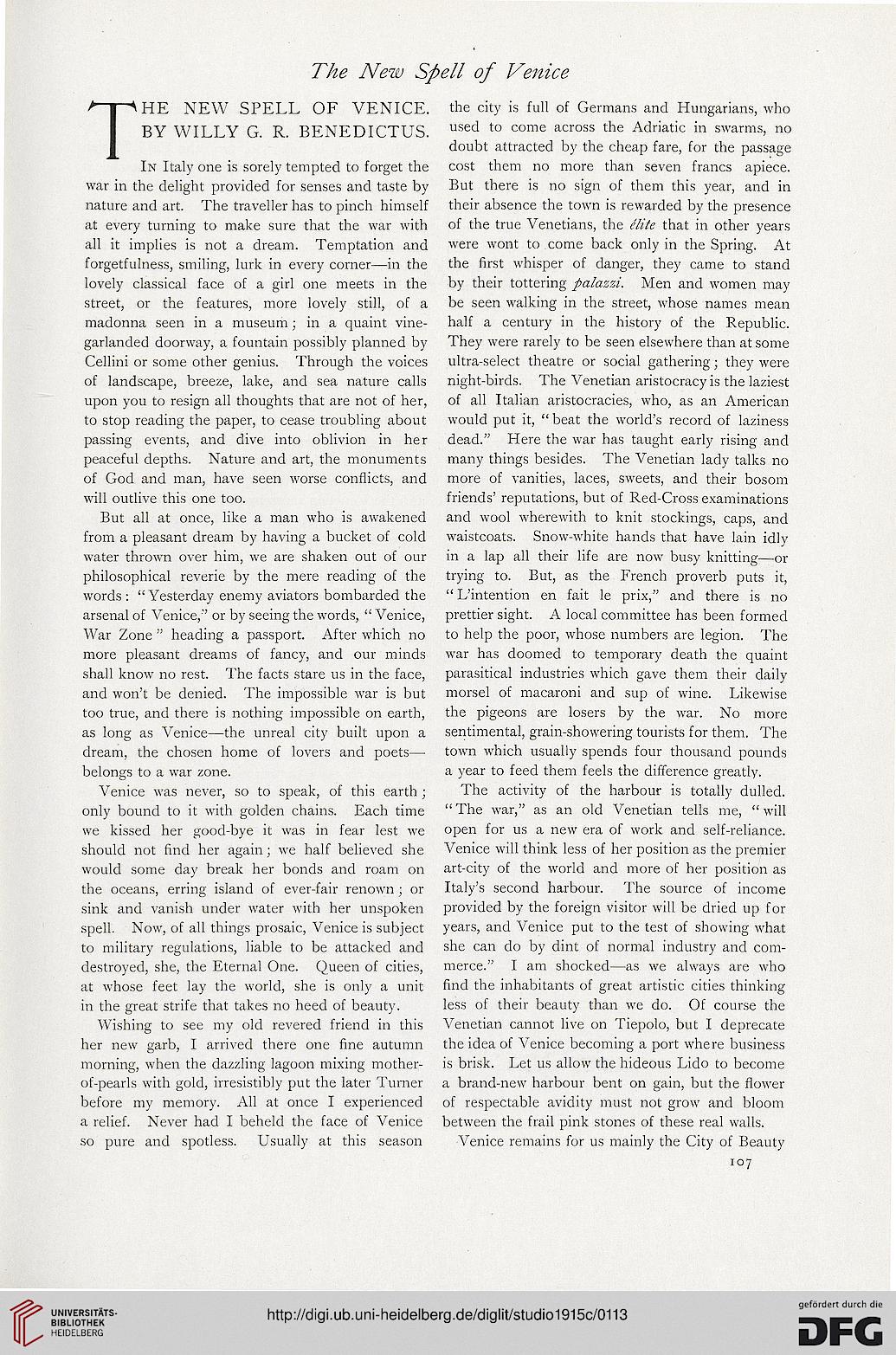 Information about OCR text
The New Spell of Venice

The new spell of Venice.

In Italy one is sorely tempted to forget the
war in the delight provided for senses and taste by
nature and art. The traveller has to pinch himself
at every turning to make sure that the war with
all it implies is not a dream. Temptation and
forgetfulness, smiling, lurk in every corner—in the
lovely classical face of a girl one meets in the
street, or the features, more lovely still, of a
madonna seen in a museum; in a quaint vine-
garlanded doorway, a fountain possibly planned by
Cellini or some other genius. Through the voices
of landscape, breeze, lake, and sea nature calls
upon you to resign all thoughts that are not of her,
to stop reading the paper, to cease troubling about
passing events, and dive into oblivion in her
peaceful depths. Nature and art, the monuments
of God and man, have seen worse conflicts, and
will outlive this one too.

But all at once, like a man who is awakened
from a pleasant dream by having a bucket of cold
water thrown over him, we are shaken out of our
philosophical reverie by the mere reading of the
words : “Yesterday enemy aviators bombarded the
arsenal of Venice,” or by seeing the words, “Venice,
War Zone ” heading a passport. After which no
more pleasant dreams of fancy, and our minds
shall know no rest. The facts stare us in the face,
and won’t be denied. The impossible war is but
too true, and there is nothing impossible on earth,
as long as Venice—the unreal city built upon a
dream, the chosen home of lovers and poets—
belongs to a war zone.

Venice was never, so to speak, of this earth;
only bound to it with golden chains. Each time
we kissed her good-bye it was in fear lest we
should not find her again; we half believed she
would some day break her bonds and roam on
the oceans, erring island of ever-fair renown; or
sink and vanish under water with her unspoken
spell. Now, of all things prosaic, Venice is subject
to military regulations, liable to be attacked and
destroyed, she, the Eternal One. Queen of cities,
at whose feet lay the world, she is only a unit
in the great strife that takes no heed of beauty.

Wishing to see my old revered friend in this
her new garb, I arrived there one fine autumn
morning, when the dazzling lagoon mixing mother-
of-pearls with gold, irresistibly put the later Turner
before my memory. All at once I experienced
a relief. Never had I beheld the face of Venice
so pure and spotless. Usually at this season

the city is full of Germans and Hungarians, who
used to come across the Adriatic in swarms, no
doubt attracted by the cheap fare, for the passage
cost them no more than seven francs apiece.
But there is no sign of them this year, and in
their absence the town is rewarded by the presence
of the true Venetians, the elite that in other years
were wont to come back only in the Spring. At
the first whisper of danger, they came to stand
by their tottering palazzi. Men and women may
be seen walking in the street, whose names mean
half a century in the history of the Republic.
They were rarely to be seen elsewhere than at some
ultra-select theatre or social gathering; they were
night-birds. The Venetian aristocracy is the laziest
of all Italian aristocracies, who, as an American
would put it, “ beat the world’s record of laziness
dead.” Here the war has taught early rising and
many things besides. The Venetian lady talks no
more of vanities, laces, sweets, and their bosom
friends’ reputations, but of Red-Cross examinations
and wool wherewith to knit stockings, caps, and
waistcoats. Snow-white hands that have lain idly
in a lap all their life are now busy knitting—or
trying to. But, as the French proverb puts it,
“ L’intention en fait le prix,” and there is no
prettier sight. A local committee has been formed
to help the poor, whose numbers are legion. The
war has doomed to temporary death the quaint
parasitical industries which gave them their daily
morsel of macaroni and sup of wine. Likewise
the pigeons are losers by the war. No more
sentimental, grain-showering tourists for them. The
town which usually spends four thousand pounds
a year to feed them feels the difference greatly.

The activity of the harbour is totally dulled.

“ The war,” as an old Venetian tells me, “ will
open for us a new era of work and self-reliance.
Venice will think less of her position as the premier
art-city of the world and more of her position as
Italy’s second harbour. The source of income
provided by the foreign visitor will be dried up for
years, and Venice put to the test of showing what
she can do by dint of normal industry and com-
merce.” I am shocked—as we always are who
find the inhabitants of great artistic cities thinking
less of their beauty than we do. Of course the
Venetian cannot live on Tiepolo, but I deprecate
the idea of Venice becoming a port where business
is brisk. Let us allow the hideous Lido to become
a brand-new harbour bent on gain, but the flower
of respectable avidity must not grow and bloom
between the frail pink stones of these real walls.

Venice remains for us mainly the City of Beauty