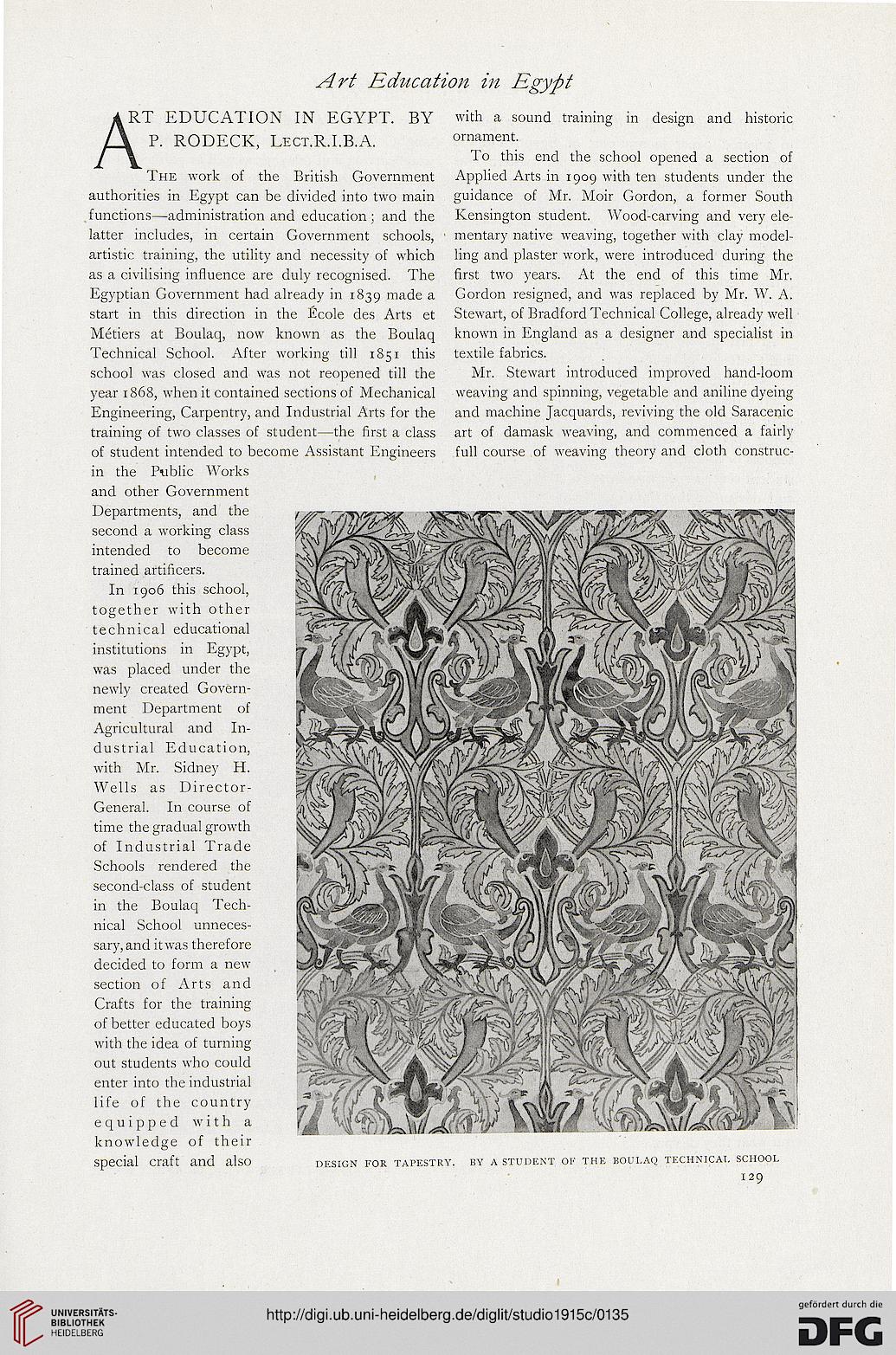 The work of the British Government
authorities in Egypt can be divided into two main
functions—administration and education ; and the
latter includes, in certain Government schools,
artistic training, the utility and necessity of which
as a civilising influence are duly recognised. The
Egyptian Government had already in 1839 made a
start in this direction in the Ecole des Arts et
Metiers at Boulaq, now known as the Boulaq
Technical School. After working till 1851 this
school was closed and was not reopened till the
year 1868, when it contained sections of Mechanical
Engineering, Carpentry, and Industrial Arts for the
training of two classes of student—the first a class
of student intended to become Assistant Engineers
in the Public Works
and other Government
Departments, and the
second a working class
intended to become
trained artificers.

In 1906 this school,
together with other
technical educational
institutions in Egypt,
was placed under the
newly created Govern-
ment Department of
Agricultural and In-
dustrial Education,
with Mr. Sidney H.

Wells as Director-
General. In course of
time the gradual growth
of Industrial Trade
Schools rendered the
second-class of student
in the Boulaq Tech-
nical School unneces-
sary, and it was therefore
decided to form a new
section of Arts and
Crafts for the training
of better educated boys
with the idea of turning
out students who could
enter into the industrial
life of the country
equipped with a
knowledge of their
special craft and also

with a sound training in design and historic
ornament.

To this end the school opened a section of
Applied Arts in 1909 with ten students under the
guidance of Mr. Moir Gordon, a former South
Kensington student. Wood-carving and very ele-
mentary native weaving, together with clay model-
ling and plaster work, were introduced during the
first two years. At the end of this time Mr.
Gordon resigned, and was replaced by Mr. W. A.
Stewart, of Bradford Technical College, already well
known in England as a designer and specialist in
textile fabrics.

DESIGN FOR TAPESTRY. BY A STUDENT, OF THE BOUI.AQ TECHNICAL SCHOOL