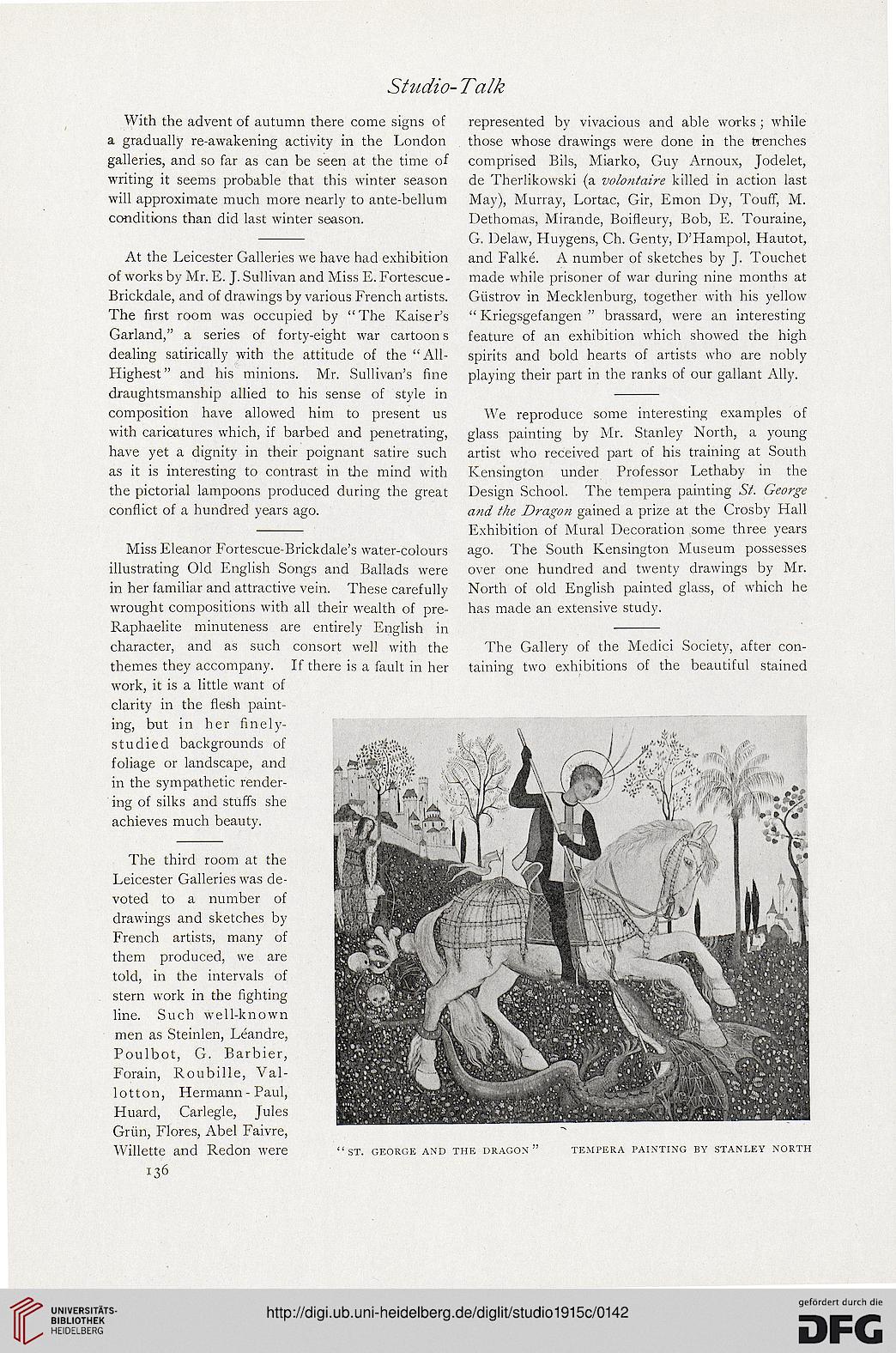 With the advent of autumn there come signs of
a gradually re-awakening activity in the London
galleries, and so far as can be seen at the time of
writing it seems probable that this winter season
will approximate much more nearly to ante-bellum
conditions than did last winter season.

At the Leicester Galleries we have had exhibition
of works by Mr. E. J. Sullivan and Miss E. Fortescue -
Brickdale, and of drawings by various French artists.
The first room was occupied by “The Kaiser’s
Garland,” a series of forty-eight war cartoon s
dealing satirically with the attitude of the “All-
Highest” and his minions. Mr. Sullivan’s fine
draughtsmanship allied to his sense of style in
composition have allowed him to present us
with caricatures which, if barbed and penetrating,
have yet a dignity in their poignant satire such
as it is interesting to contrast in the mind with
the pictorial lampoons produced during the great
conflict of a hundred years ago.

Miss Eleanor Fortescue-Brickdale’s water-colours
illustrating Old English Songs and Ballads were
in her familiar and attractive vein. These carefully
wrought compositions with all their wealth of pre-
Raphaelite minuteness are entirely English in
character, and as such consort well with the
themes they accompany. If there is a fault in her
work, it is a little want of
clarity in the flesh paint-
ing, but in her finely-
studied backgrounds of
foliage or landscape, and
in the sympathetic render-
ing of silks and stuffs she
achieves much beauty.

The third room at the
Leicester Galleries was de-
voted to a number of
drawings and sketches by
French artists, many of
them produced, we are
told, in the intervals of
stern work in the fighting
line. Such well-known
men as Steinlen, Leandre,
Poulbot, G. Barbier,
Forain, Roubille, Val-
lotton, Hermann - Paul,
Huard, Carlegle, Jules
Grim, Flores, Abel Faivre,
Willette and Redon were
136

represented by vivacious and able works ; while
those whose drawings were done in the trenches
comprised Bils, Miarko, Guy Arnoux, Jodelet,
de Therlikowski (a volontaire killed in action last
May), Murray, Lortac, Gir, Emon Dy, Touff, M.
Dethomas, Mirande, Boifleury, Bob, E. Touraine,
G. Delaw, Huygens, Ch. Genty, D’Hampol, Hautot,
and Falke. A number of sketches by J. Touchet
made while prisoner of war during nine months at
Giistrov in Mecklenburg, together with his yellow
“ Kriegsgefangen ” brassard, were an interesting
feature of an exhibition which showed the high
spirits and bold hearts of artists who are nobly
playing their part in the ranks of our gallant Ally.

We reproduce some interesting examples of
glass painting by Mr. Stanley North, a young
artist who received part of his training at South
Kensington under Professor Lethaby in the
Design School. The tempera painting St. George
and the Dragon gained a prize at the Crosby Hall
Exhibition of Mural Decoration some three years
ago. The South Kensington Museum possesses
over one hundred and twenty drawings by Mr.
North of old English painted glass, of which he
has made an extensive study.

The Gallery of the Medici Society, after con-
taining two exhibitions of the beautiful stained