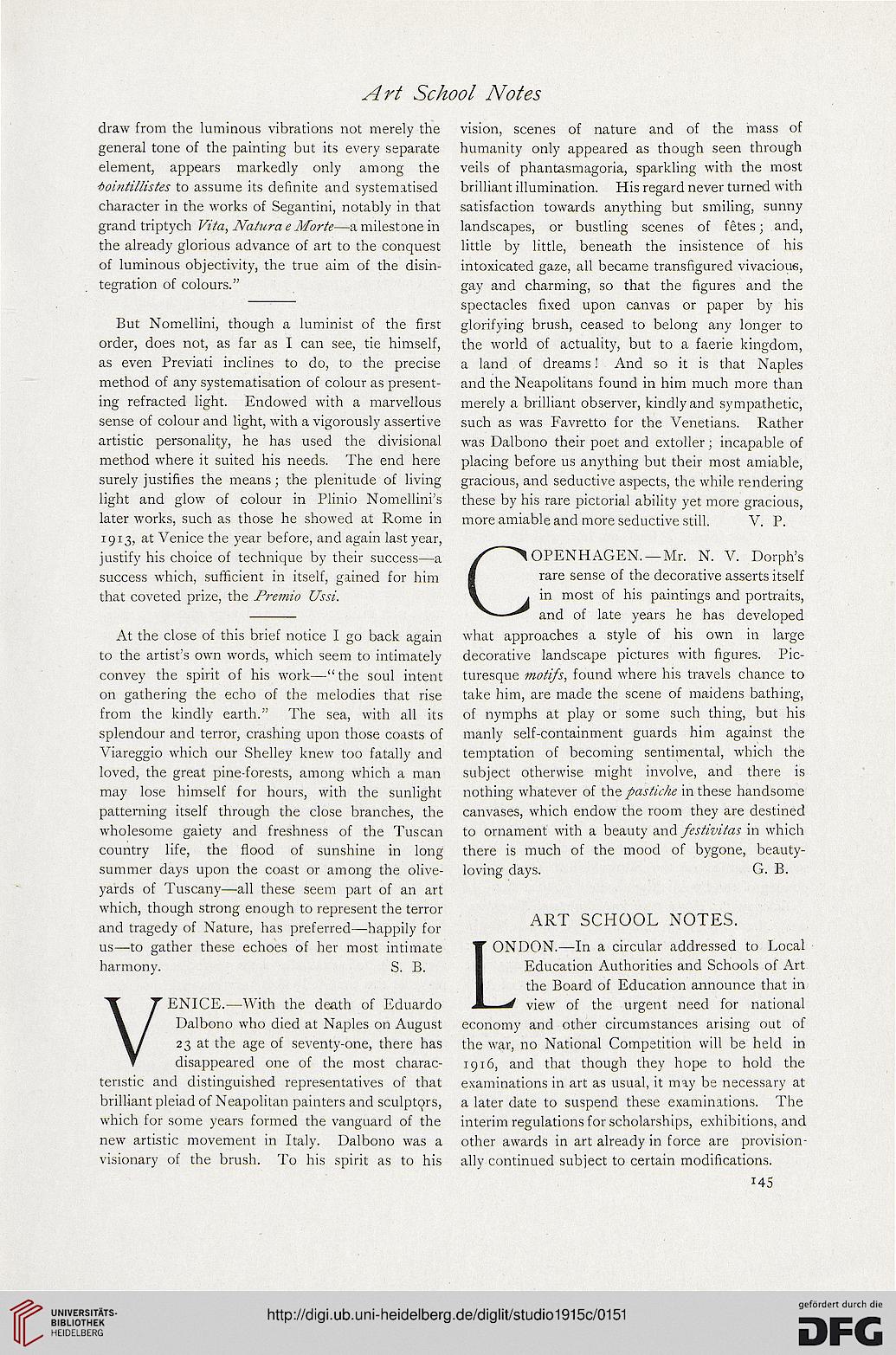 draw from the luminous vibrations not merely the
general tone of the painting but its every separate
element, appears markedly only among the
■hointillistes to assume its definite and systematised
character in the works of Segantini, notably in that
grand triptych Vita, Natura e Morte—a milestone in
the already glorious advance of art to the conquest
of luminous objectivity, the true aim of the disin-
tegration of colours.”

But Nomellini, though a luminist of the first
order, does not, as far as I can see, tie himself,
as even Previati inclines to do, to the precise
method of any systematisation of colour as present-
ing refracted light. Endowed with a marvellous
sense of colour and light, with a vigorously assertive
artistic personality, he has used the divisional
method where it suited his needs. The end here
surely justifies the means; the plenitude of living
light and glow of colour in Plinio Nomellini’s
later works, such as those he showed at Rome in
1913, at Venice the year before, and again last year,
justify his choice of technique by their success—a
success which, sufficient in itself, gained for him
that coveted prize, the Premio Ussi.

At the close of this brief notice I go back again
to the artist’s own words, which seem to intimately
convey the spirit of his work—“the soul intent
on gathering the echo of the melodies that rise
from the kindly earth.” The sea, with all its
splendour and terror, crashing upon those coasts of
Viareggio which our Shelley knew too fatally and
loved, the great pine-forests, among which a man
may lose himself for hours, with the sunlight
patterning itself through the close branches, the
wholesome gaiety and freshness of the Tuscan
country life, the flood of sunshine in long
summer days upon the coast or among the olive-
yards of Tuscany—all these seem part of an art
which, though strong enough to represent the terror
and tragedy of Nature, has preferred—happily for
us—to gather these echoes of her most intimate
harmony. S. B.

ENICE.—With the death of Eduardo
Dalbono who died at Naples on August
23 at the age of seventy-one, there has
disappeared one of the most charac-
teristic and distinguished representatives of that
brilliant pleiad of Neapolitan painters and sculptqrs,
which for some years formed the vanguard of the
new artistic movement in Italy. Dalbono was a
visionary of the brush. To his spirit as to his

vision, scenes of nature and of the mass of
humanity only appeared as though seen through
veils of phantasmagoria, sparkling with the most
brilliant illumination. His regard never turned with
satisfaction towards anything but smiling, sunny
landscapes, or bustling scenes of fetes; and,
little by little, beneath the insistence of his
intoxicated gaze, all became transfigured vivacious,
gay and charming, so that the figures and the
spectacles fixed upon canvas or paper by his
glorifying brush, ceased to belong any longer to
the world of actuality, but to a faerie kingdom,
a land of dreams! And so it is that Naples
and the Neapolitans found in him much more than
merely a brilliant observer, kindly and sympathetic,
such as was Favretto for the Venetians. Rather
was Dalbono their poet and extoller; incapable of
placing before us anything but their most amiable,
gracious, and seductive aspects, the while rendering
these by his rare pictorial ability yet more gracious,
more amiable and more seductive still. V. P.

COPENHAGEN. —Mr. N. V. Dorph’s
rare sense of the decorative asserts itself
in most of his paintings and portraits,
and of late years he has developed
what approaches a style of his own in large
decorative landscape pictures with figures. Pic-
turesque motifs, found where his travels chance to
take him, are made the scene of maidens bathing,
of nymphs at play or some such thing, but his
manly self-containment guards him against the
temptation of becoming sentimental, which the
subject otherwise might involve, and there is
nothing whatever of the pastiche in these handsome
canvases, which endow the room they are destined
to ornament with a beauty and festivitas in which
there is much of the mood of bygone, beauty-
loving days. G. B.

CDON.—In a circular addressed to Local
Education Authorities and Schools of Art
the Board of Education announce that in
view of the urgent need for national
economy and other circumstances arising out of
the war, no National Competition will be held in
1916, and that though they hope to hold the
examinations in art as usual, it may be necessary at
a later date to suspend these examinations. The
interim regulations for scholarships, exhibitions, and
other awards in art already in force are provision-
ally continued subject to certain modifications.