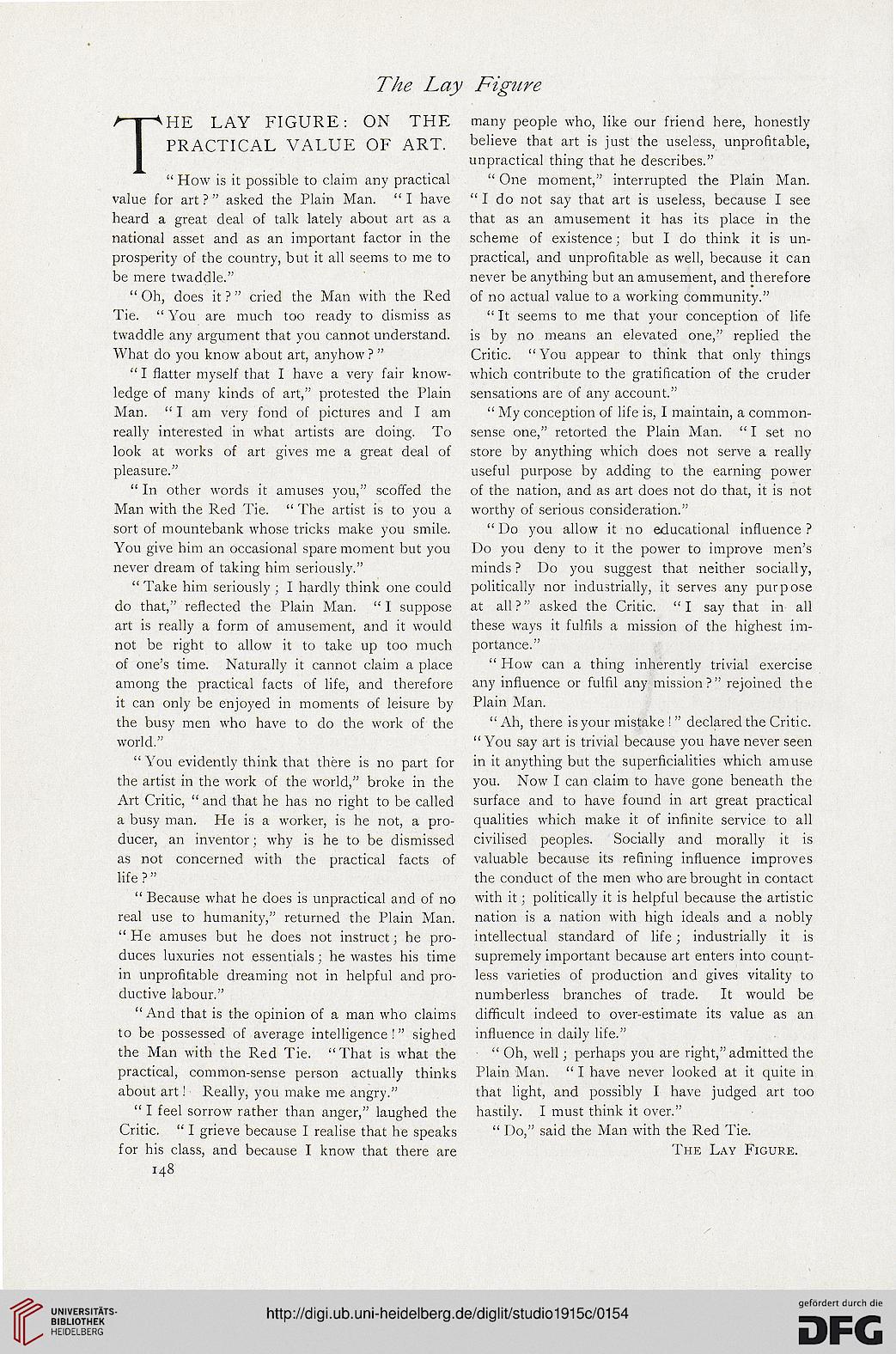 THE LAY FIGURE: ON THE
PRACTICAL VALUE OF ART.

“ How is it possible to claim any practical
value for art ? ” asked the Plain Man. “ I have
heard a great deal of talk lately about art as a
national asset and as an important factor in the
prosperity of the country, but it all seems to me to
be mere twaddle.”

“ Oh, does it ? ” cried the Man with the Red
Tie. “You are much too ready to dismiss as
twaddle any argument that you cannot understand.
What do you know about art, anyhow ? ”

“I flatter myself that I have a very fair know-
ledge of many kinds of art,” protested the Plain
Man. “ I am very fond of pictures and I am
really interested in what artists are doing. To
look at works of art gives me a great deal of
pleasure.”

“ In other words it amuses you,” scoffed the
Man with the Red Tie. “ The artist is to you a
sort of mountebank whose tricks make you smile.
You give him an occasional spare moment but you
never dream of taking him seriously.”

“ Take him seriously ; I hardly think one could
do that,” reflected the Plain Man. “ I suppose
art is really a form of amusement, and it would
not be right to allow it to take up too much
of one’s time. Naturally it cannot claim a place
among the practical facts of life, and therefore
it can only be enjoyed in moments of leisure by
the busy men who have to do the work of the
world.”

“You evidently think that there is no part for
the artist in the work of the world,” broke in the
Art Critic, “ and that he has no right to be called
a busy man. He is a worker, is he not, a pro-
ducer, an inventor; why is he to be dismissed
as not concerned with the practical facts of
life?”

“ Because what he does is unpractical and of no
real use to humanity,” returned the Plain Man.
“He amuses but he does not instruct; he pro-
duces luxuries not essentials; he wastes his time
in unprofitable dreaming not in helpful and pro-
ductive labour.”

“ And that is the opinion of a man who claims
to be possessed of average intelligence!” sighed
the Man with the Red Tie. “That is what the
practical, common-sense person actually thinks
about art! Really, you make me angry.”

“ I feel sorrow rather than anger,” laughed the
Critic. “ I grieve because I realise that he speaks
for his class, and because I know that there are
148

many people who, like our friend here, honestly
believe that art is just the useless, unprofitable,
unpractical thing that he describes.”

“ One moment,” interrupted the Plain Man.
“ I do not say that art is useless, because I see
that as an amusement it has its place in the
scheme of existence; but I do think it is un-
practical, and unprofitable as well, because it can
never be anything but an amusement, and therefore
of no actual value to a working community.”

“ It seems to me that your conception of life
is by no means an elevated one,” replied the
Critic. “You appear to think that only things
which contribute to the gratification of the cruder
sensations are of any account.”

“ My conception of life is, I maintain, a common-
sense one,” retorted the Plain Man. “ I set no
store by anything which does not serve a really
useful purpose by adding to the earning power
of the nation, and as art does not do that, it is not
worthy of serious consideration.”

“ Do you allow it no educational influence ?
Do you deny to it the power to improve men’s
minds ? Do you suggest that neither socially,
politically nor industrially, it serves any purpose
at all?” asked the Critic. “I say that in all
these ways it fulfils a mission of the highest im-
portance.”

“ How can a thing inherently trivial exercise
any influence or fulfil any mission?” rejoined the
Plain Man.

“ Ah, there is your mistake ! ” declared the Critic.
“You say art is trivial because you have never seen
in it anything but the superficialities which amuse
you. Now I can claim to have gone beneath the
surface and to have found in art great practical
qualities which make it of infinite service to all
civilised peoples. Socially and morally it is
valuable because its refining influence improves
the conduct of the men who are brought in contact
with it; politically it is helpful because the artistic
nation is a nation with high ideals and a nobly
intellectual standard of life; industrially it is
supremely important because art enters into count-
less varieties of production and gives vitality to
numberless branches of trade. It would be
difficult indeed to over-estimate its value as an
influence in daily life.”

“ Oh, well; perhaps you are right,” admitted the
Plain Man. “ I have never looked at it quite in
that light, and possibly I have judged art too
hastily. I must think it over.”