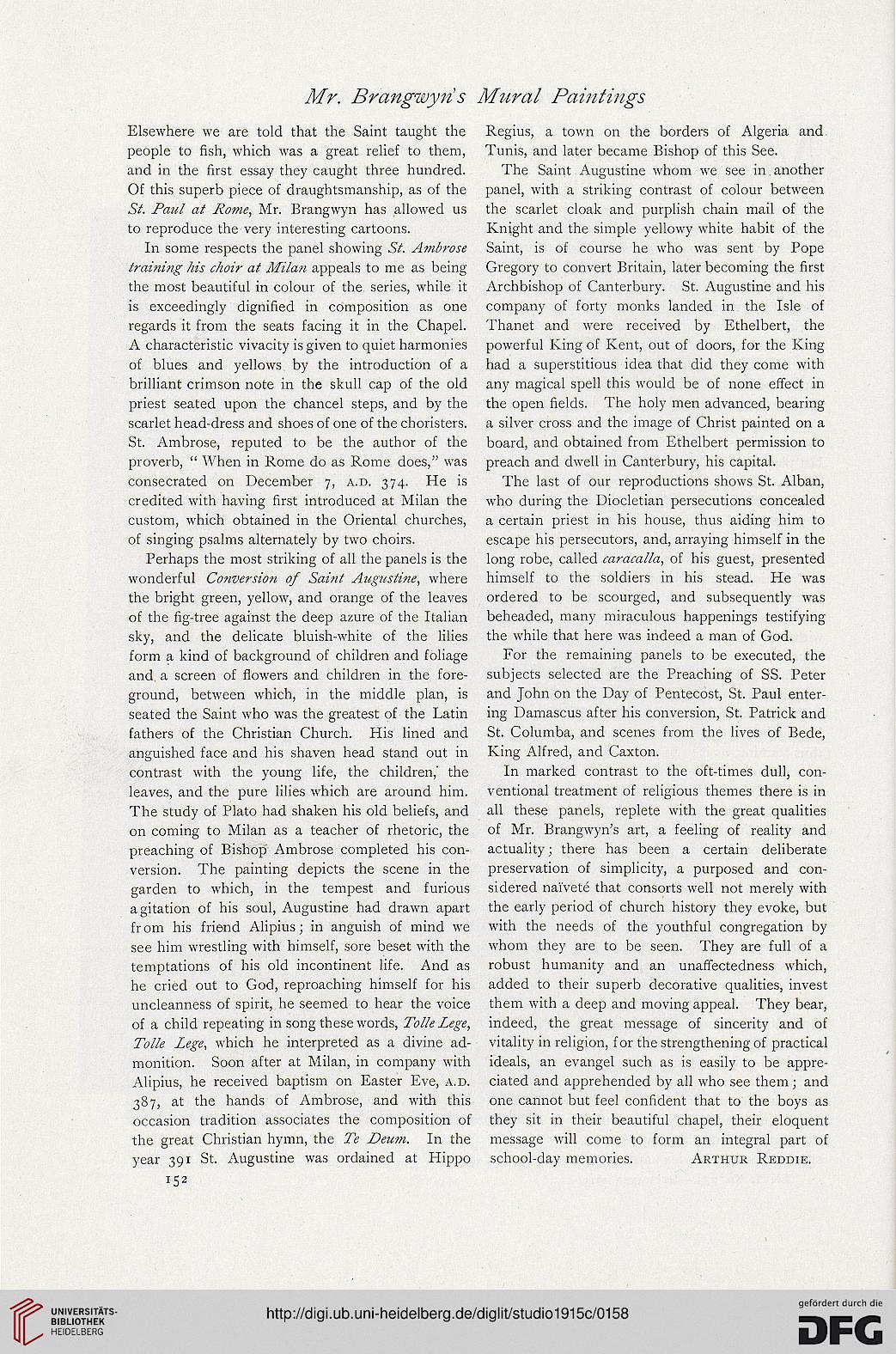 Elsewhere we are told that the Saint taught the
people to fish, which was a great relief to them,
and in the first essay they caught three hundred.
Of this superb piece of draughtsmanship, as of the
St. Paul at Rome, Mr. Brangwyn has allowed us
to reproduce the very interesting cartoons.

In some respects the panel showing St. Ambrose
training his choir at Milan appeals to me as being
the most beautiful in colour of the series, while it
is exceedingly dignified in composition as one
regards it from the seats facing it in the Chapel.
A characteristic vivacity is given to quiet harmonies
of blues and yellows by the introduction of a
brilliant crimson note in the skull cap of the old
priest seated upon the chancel steps, and by the
scarlet head-dress and shoes of one of the choristers.
St. Ambrose, reputed to be the author of the
proverb, “ When in Rome do as Rome does,” was
consecrated on December 7, a.d. 374. He is
credited with having first introduced at Milan the
custom, which obtained in the Oriental churches,
of singing psalms alternately by two choirs.

Perhaps the most striking of all the panels is the
wonderful Conversion of Saint Augustine, where
the bright green, yellow, and orange of the leaves
of the fig-tree against the deep azure of the Italian
sky, and the delicate bluish-white of the lilies
form a kind of background of children and foliage
and a screen of flowers and children in the fore-
ground, between which, in the middle plan, is
seated the Saint who was the greatest of the Latin
fathers of the Christian Church. His lined and
anguished face and his shaven head stand out in
contrast with the young life, the children,' the
leaves, and the pure lilies which are around him.
The study of Plato had shaken his old beliefs, and
on coming to Milan as a teacher of rhetoric, the
preaching of Bishop Ambrose completed his con-
version. The painting depicts the scene in the
garden to which, in the tempest and furious
agitation of his soul, Augustine had drawn apart
from his friend Alipius; in anguish of mind we
see him wrestling with himself, sore beset with the
temptations of his old incontinent life. And as
he cried out to God, reproaching himself for his
uncleanness of spirit, he seemed to hear the voice
of a child repeating in song these words, Tolle Lege,
Tolle Lege, which he interpreted as a divine ad-
monition. Soon after at Milan, in company with
Alipius, he received baptism on Easter Eve, a.d.
387, at the hands of Ambrose, and with this
occasion tradition associates the composition of
the great Christian hymn, the Te Deum. In the
year 391 St. Augustine was ordained at Hippo
i52

Regius, a town on the borders of Algeria and
Tunis, and later became Bishop of this See.

The Saint Augustine whom we see in another
panel, with a striking contrast of colour between
the scarlet cloak and purplish chain mail of the
Knight and the simple yellowy white habit of the
Saint, is of course he wdio was sent by Pope
Gregory to convert Britain, later becoming the first
Archbishop of Canterbury. St. Augustine and his
company of forty monks landed in the Isle of
Thanet and were received by Ethelbert, the
powerful King of Kent, out of doors, for the King
had a superstitious idea that did they come with
any magical spell this would be of none effect in
the open fields. The holy men advanced, bearing
a silver cross and the image of Christ painted on a
board, and obtained from Ethelbert permission to
preach and dwell in Canterbury, his capital.

The last of our reproductions shows St. Alban,
who during the Diocletian persecutions concealed
a certain priest in his house, thus aiding him to
escape his persecutors, and, arraying himself in the
long robe, called caracalla, of his guest, presented
himself to the soldiers in his stead. He was
ordered to be scourged, and subsequently was
beheaded, many miraculous happenings testifying
the while that here was indeed a man of God.

For the remaining panels to be executed, the
subjects selected are the Preaching of SS. Peter
and John on the Day of Pentecost, St. Paul enter-
ing Damascus after his conversion, St. Patrick and
St. Columba, and scenes from the lives of Bede,
King Alfred, and Caxton.

In marked contrast to the oft-times dull, con-
ventional treatment of religious themes there is in
all these panels, replete with the great qualities
of Mr. Brangwyn’s art, a feeling of reality and
actuality; there has been a certain deliberate
preservation of simplicity, a purposed and con-
sidered naivete that consorts well not merely with
the early period of church history they evoke, but
with the needs of the youthful congregation by
whom they are to be seen. They are full of a
robust humanity and an unaffectedness which,
added to their superb decorative qualities, invest
them with a deep and moving appeal. They bear,
indeed, the great message of sincerity and of
vitality in religion, for the strengthening of practical
ideals, an evangel such as is easily to be appre-
ciated and apprehended by all who see them; and
one cannot but feel confident that to the boys as
they sit in their beautiful chapel, their eloquent
message will come to form an integral part of
school-day memories. Arthur Reddie.