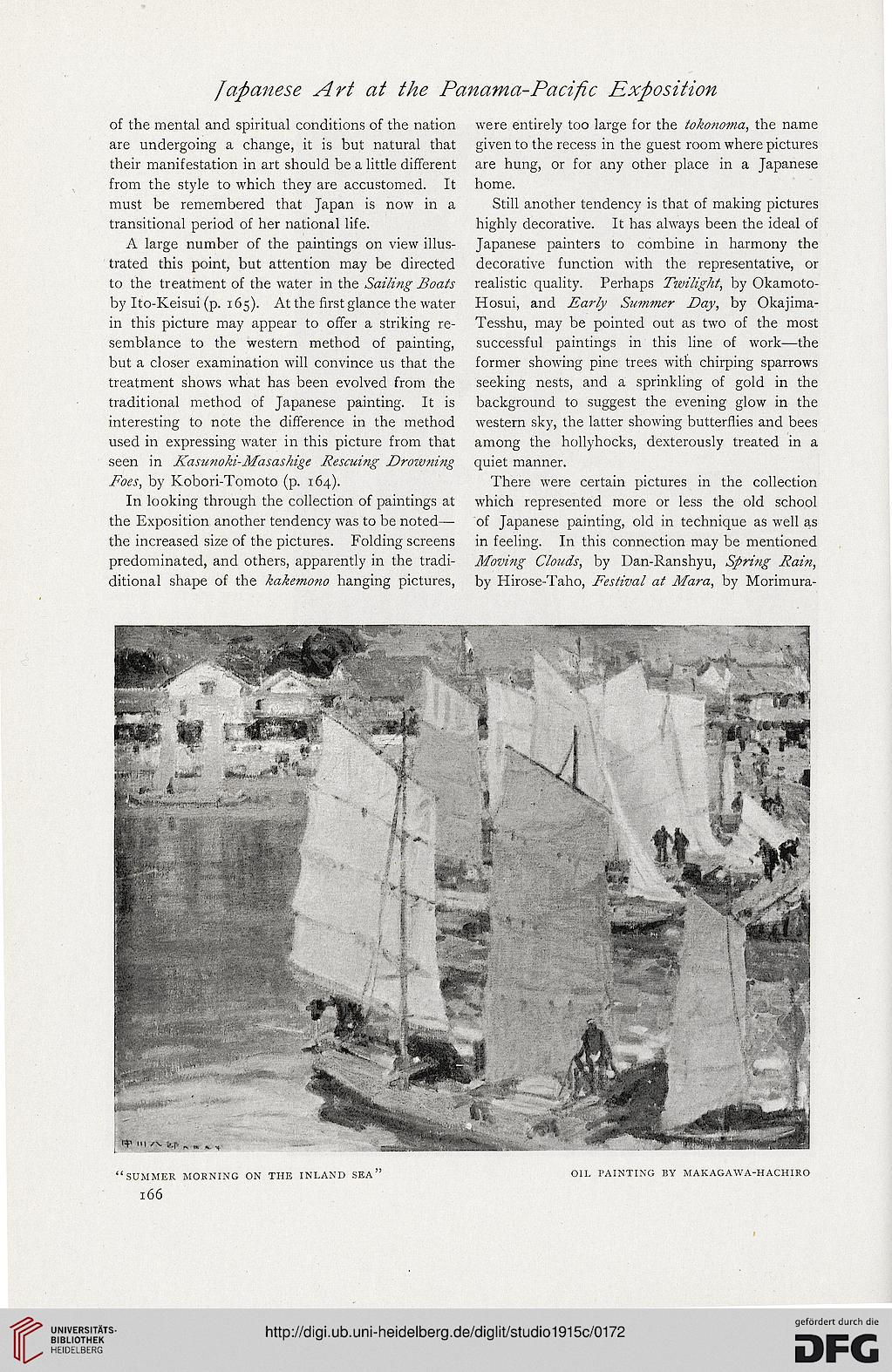 Information about OCR text
Japanese Art at the Panama-Pacific Exposition

of the mental and spiritual conditions of the nation
are undergoing a change, it is but natural that
their manifestation in art should be a little different
from the style to which they are accustomed. It
must be remembered that Japan is now in a
transitional period of her national life.

A large number of the paintings on view illus-
trated this point, but attention may be directed
to the treatment of the water in the Sailing Boats
by Ito-Keisui (p. 165). At the first glance the water
in this picture may appear to offer a striking re-
semblance to the western method of painting,
but a closer examination will convince us that the
treatment shows what has been evolved from the
traditional method of Japanese painting. It is
interesting to note the difference in the method
used in expressing water in this picture from that
seen in Kasunoki-Masashige Rescuing Drowfling
Foes, by Kobori-Tomoto (p. 164).

In looking through the collection of paintings at
the Exposition another tendency was to be noted—
the increased size of the pictures. Folding screens
predominated, and others, apparently in the tradi-
ditional shape of the kakemono hanging pictures,

were entirely too large for the tokonoma, the name
given to the recess in the guest room where pictures
are hung, or for any other place in a Japanese
home.

Still another tendency is that of making pictures
highly decorative. It has always been the ideal of
Japanese painters to combine in harmony the
decorative function with the representative, or
realistic quality. Perhaps Twilight, by Okamoto-
Hosui, and Early Summer Day, by Okajima-
Tesshu, may be pointed out as two of the most
successful paintings in this line of work—the
former showing pine trees with chirping sparrows
seeking nests, and a sprinkling of gold in the
background to suggest the evening glow in the
western sky, the latter showing butterflies and bees
among the hollyhocks, dexterously treated in a
quiet manner.

There were certain pictures in the collection
which represented more or less the old school
of Japanese painting, old in technique as well as
in feeling. In this connection may be mentioned
Moving Clouds, by Dan-Ranshyu, Spring Rain,
by Hirose-Taho, Festival at Mara, by Morimura-