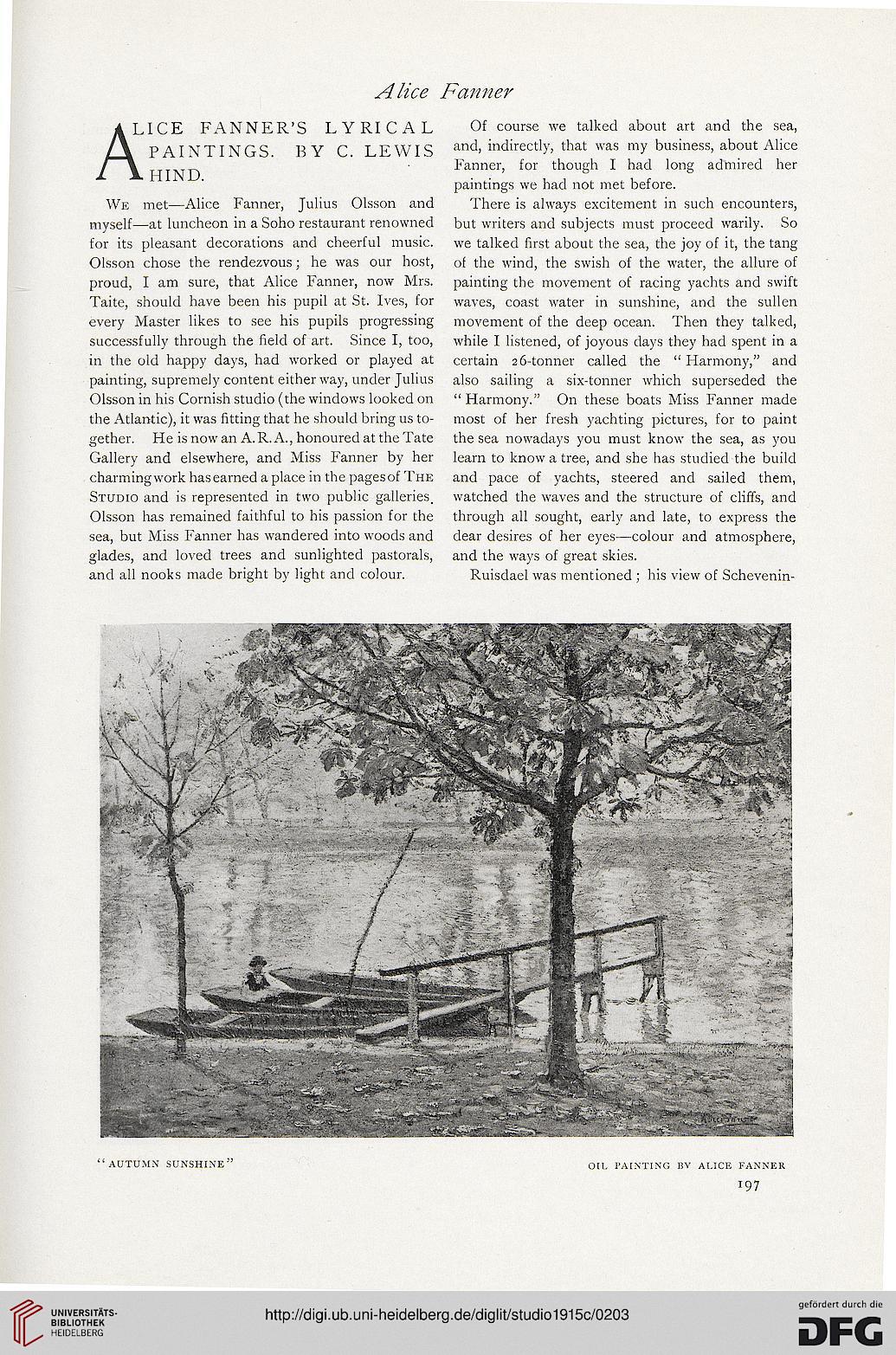 We met—Alice Fanner, Julius Olsson and
myself—at luncheon in a Soho restaurant renowned
for its pleasant decorations and cheerful music.
Olsson chose the rendezvous; he was our host,
proud, I am sure, that Alice Fanner, now Mrs.
Taite, should have been his pupil at St. Ives, for
every Master likes to see his pupils progressing
successfully through the field of art. Since I, too,
in the old happy days, had worked or played at
painting, supremely content either way, under Julius
Olsson in his Cornish studio (the windows looked on
the Atlantic), it was fitting that he should bring us to-
gether. He isnowan A.R.A., honoured at the Tate
Gallery and elsewhere, and Miss Fanner by her
charmingwork has earned a place in the pagesof The
Studio and is represented in two public galleries,
Olsson has remained faithful to his passion for the
sea, but Miss Fanner has wandered into woods and
glades, and loved trees and sunlighted pastorals,
and all nooks made bright by light and colour.

Of course we talked about art and the sea,
and, indirectly, that was my business, about Alice
Fanner, for though I had long admired her
paintings we had not met before.

There is always excitement in such encounters,
but writers and subjects must proceed warily. So
we talked first about the sea, the joy of it, the tang
of the wind, the swish of the water, the allure of
painting the movement of racing yachts and swift
waves, coast water in sunshine, and the sullen
movement of the deep ocean. Then they talked,
while I listened, of joyous days they had spent in a
certain 26-tonner called the “ Harmony,” and
also sailing a six-tonner which superseded the
“ Harmony.” On these boats Miss Fanner made
most of her fresh yachting pictures, for to paint
the sea nowadays you must know the sea, as you
learn to know a tree, and she has studied the build
and pace of yachts, steered and sailed them,
watched the waves and the structure of cliffs, and
through all sought, early and late, to express the
dear desires of her eyes—colour and atmosphere,
and the ways of great skies.

Ruisdael was mentioned ; his view of Schevenin-