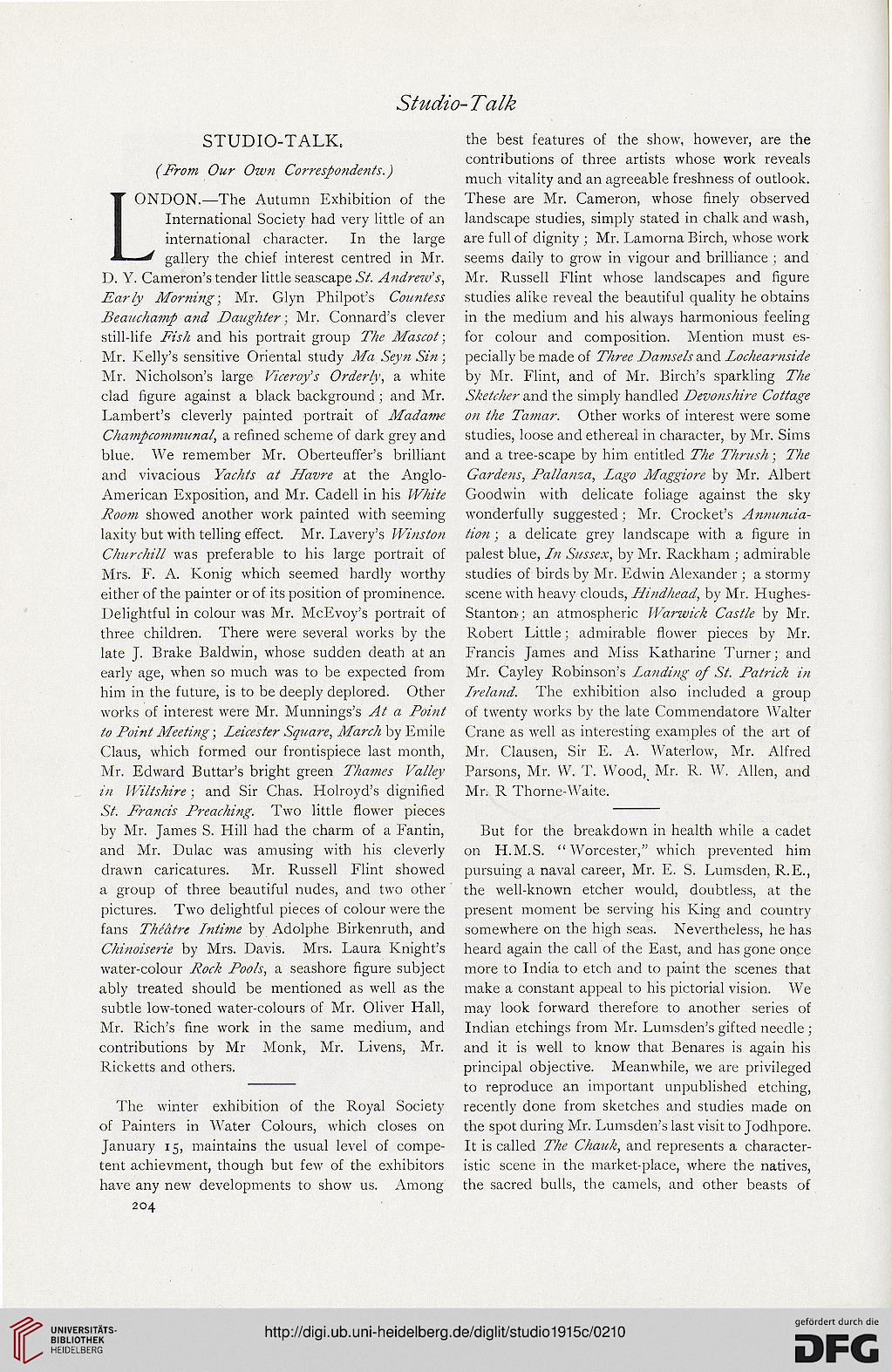 LONDON.'—The Autumn Exhibition of the
International Society had very little of an
international character. In the large
—^ gallery the chief interest centred in Mr.
D. Y. Cameron’s tender little seascape St. Andrew's,
Early Morning; Mr. Glyn Philpot’s Countess
Beauchamp and Daughter-, Mr. Connard’s clever
still-life Fish and his portrait group The Mascot-,
Mr. Kelly’s sensitive Oriental study Ma Seyn Sin;
Mr. Nicholson’s large Viceroy’s Orderly, a white
clad figure against a black background; and Mr.
Lambert’s cleverly painted portrait of Madame
Champcommunal, a refined scheme of dark grey and
blue. We remember Mr. Oberteuffer’s brilliant
and vivacious Yachts at FPavre at the Anglo-
American Exposition, and Mr. Cadell in his White
Room showed another work painted with seeming
laxity but with telling effect. Mr. Lavery’s Winston
Churchill was preferable to his large portrait of
Mrs. F. A. Konig which seemed hardly worthy
either of the painter or of its position of prominence.
Delightful in colour was Mr. McEvoy’s portrait of
three children. There were several works by the
late J. Brake Baldwin, whose sudden death at an
early age, when so much was to be expected from
him in the future, is to be deeply deplored. Other
works of interest were Mr. Munnings’s At a Point
to Point Meeting; Leicester Square, Ma7-ch by Emile
Claus, which formed our frontispiece last month,
Mr. Edward Buttar’s bright green Thames Valley
in Wiltshire; and Sir Chas. Holroyd’s dignified
St. Francis Preaching. Two little flower pieces
by Mr. James S. Hill had the charm of a Fantin,
and Mr. Dulac was amusing with his cleverly
drawn caricatures. Mr. Russell Flint showed
a group of three beautiful nudes, and two other
pictures. Two delightful pieces of colour were the
fans Thl&tre Intime by Adolphe Birkenruth, and
Chinoiserie by Mrs. Davis. Mrs. Laura Knight’s
water-colour Rock Pools, a seashore figure subject
ably treated should be mentioned as well as the
subtle low-toned water-colours of Mr. Oliver Hall,
Mr. Rich’s fine work in the same medium, and
contributions by Mr Monk, Mr. Livens, Mr.
Ricketts and others.

The winter exhibition of the Royal Society
of Painters in Water Colours, which closes on
January 15, maintains the usual level of compe-
tent achievment, though but few of the exhibitors
have any new developments to show us. Among
204

the best features of the show, however, are the
contributions of three artists whose work reveals
much vitality and an agreeable freshness of outlook.
These are Mr. Cameron, whose finely observed
landscape studies, simply stated in chalk and wash,
are full of dignity ; Mr. Lamorna Birch, whose work
seems daily to grow in vigour and brilliance ; and
Mr. Russell Flint whose landscapes and figure
studies alike reveal the beautiful quality he obtains
in the medium and his always harmonious feeling
for colour and composition. Mention must es-
pecially be made of Three Damsels and Lochearnside
by Mr. Flint, and of Mr. Birch’s sparkling The
Sketcher and the simply handled Devonshire Cottage
on the Tamar. Other works of interest were some
studies, loose and ethereal in character, by Mr. Sims
and a tree-scape by him entitled The Thrush; The
Gardens, Pallanza, Lago Maggiore by Mr. Albert
Goodwin with delicate foliage against the sky
wonderfully suggested; Mr. Crocket’s Annuncia-
tion ; a delicate grey landscape with a figure in
palest blue, In Sussex, by Mr. Rackham ; admirable
studies of birds by Mr. Edwin Alexander ; a stormy
scene with heavy clouds, Hindhead, by Mr. Hughes-
Stanton; an atmospheric Warwick Castle by Mr.
Robert Little; admirable flower pieces by Mr.
Francis James and Miss Katharine Turner; and
Mr. Cayley Robinson’s Landing of St. Patrick in
Ireland. The exhibition also included a group
of twenty works by the late Commendatore Walter
Crane as well as interesting examples of the art of
Mr. Clausen, Sir E. A. Waterlow, Mr. Alfred
Parsons, Mr. W. T. Wood, Mr. R. W. Allen, and
Mr. R Thorne-Waite.

But for the breakdown in health while a cadet
on H.M.S. “Worcester,” which prevented him
pursuing a naval career, Mr. E. S. Lumsden, R.E.,
the well-known etcher would, doubtless, at the
present moment be serving his King and country
somewhere on the high seas. Nevertheless, he has
heard again the call of the East, and has gone once
more to India to etch and to paint the scenes that
make a constant appeal to his pictorial vision. We
may look forward therefore to another series of
Indian etchings from Mr. Lumsden’s gifted needle ;
and it is well to know that Benares is again his
principal objective. Meanwhile, we are privileged
to reproduce an important unpublished etching,
recently done from sketches and studies made on
the spot during Mr. Lumsden’s last visit to Jodhpore.
It is called The Chauk, and represents a character-
istic scene in the market-place, where the natives,
the sacred bulls, the camels, and other beasts of