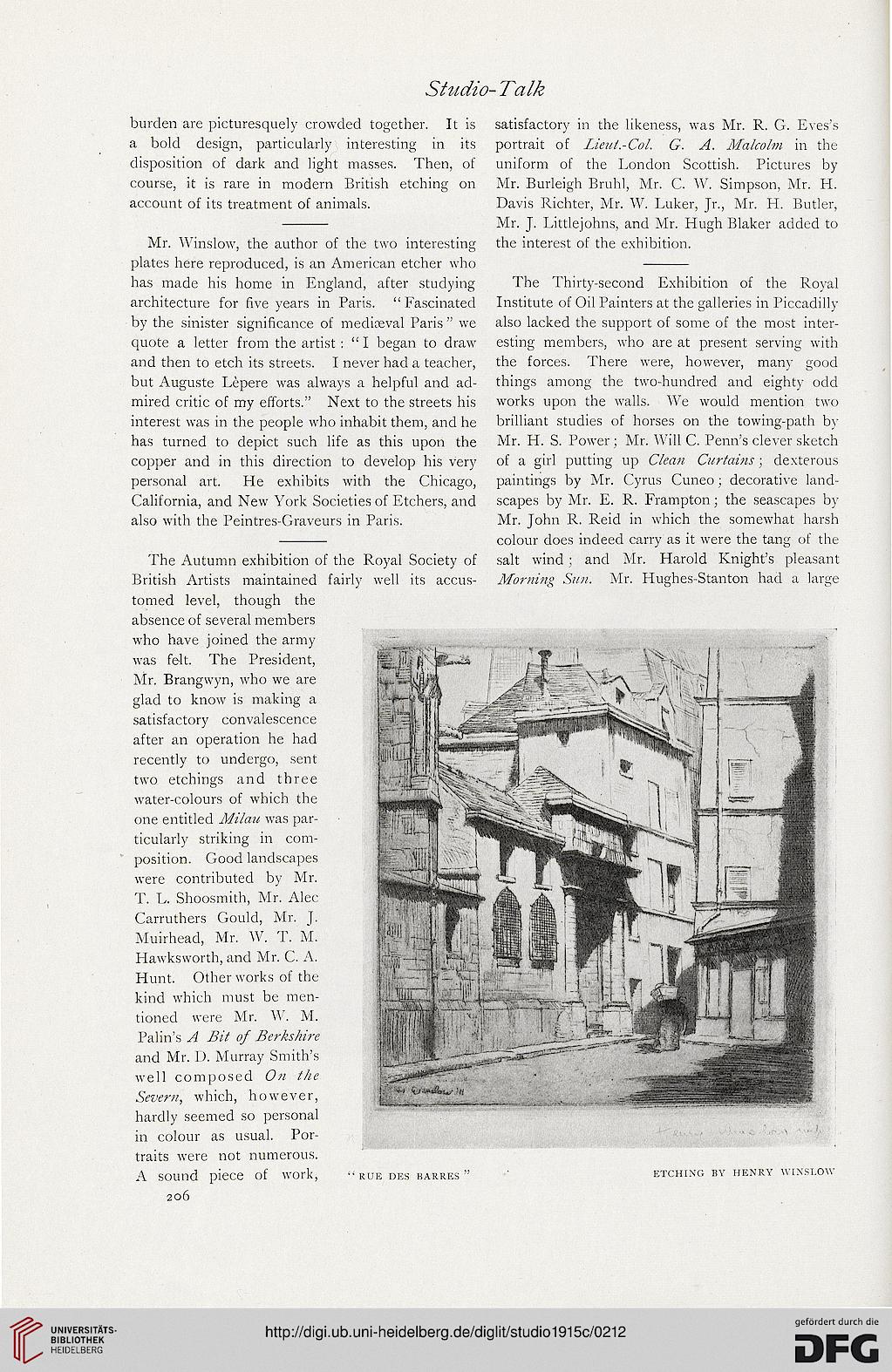 burden are picturesquely crowded together. It is
a bold design, particularly interesting in its
disposition of dark and light masses. Then, of
course, it is rare in modern British etching on
account of its treatment of animals.

Mr. Winslow, the author of the two interesting
plates here reproduced, is an American etcher who
has made his home in England, after studying
architecture for five years in Paris. “ Fascinated
by the sinister significance of mediceval Paris ” we
quote a letter from the artist : “ I began to draw
and then to etch its streets. I never had a teacher,
but Auguste Lepere was always a helpful and ad-
mired critic of my efforts.” Next to the streets his
interest was in the people who inhabit them, and he
has turned to depict such life as this upon the
copper and in this direction to develop his very
personal art. He exhibits with the Chicago,
California, and New York Societies of Etchers, and
also with the Peintres-Graveurs in Paris.

The Autumn exhibition of the Royal Society of
British Artists maintained fairly well its accus-
tomed level, though the
absence of several members
who have joined the army
was felt. The President,

Mr. Brangwyn, who we are
glad to know is making a
satisfactory convalescence
after an operation he had
recently to undergo, sent
two etchings and three
water-colours of which the
one entitled Milau was par-
ticularly striking in com-
position. Good landscapes
were contributed by Mr.

Hunt. Other works of the
kind which must be men-
tioned were Mr. W. M.

Palin’s A Bit of Berkshire
and Mr. D. Murray Smith’s
well composed On the
Severn, which, however,
hardly seemed so personal
in colour as usual. Por-
traits were not numerous.

A sound piece of work,

The Thirty-second Exhibition of the Royal
Institute of Oil Painters at the galleries in Piccadilly
also lacked the support of some of the most inter-
esting members, who are at present serving with
the forces. There were, however, many good
things among the two-hundred and eighty odd
works upon the walls. We would mention two
brilliant studies of horses on the towing-path by
Mr. H. S. Power ; Mr. Will C. Penn’s clever sketch
of a girl putting up Clean Curtains; dexterous
paintings by Mr. Cyrus Cuneo; decorative land-
scapes by Mr. E. R. Frampton; the seascapes by
Mr. John R. Reid in which the somewhat harsh
colour does indeed carry as it were the tang of the
salt wind; and Mr. Harold Knight’s pleasant
Morning Sun. Mr. Hughes-Stanton had a large