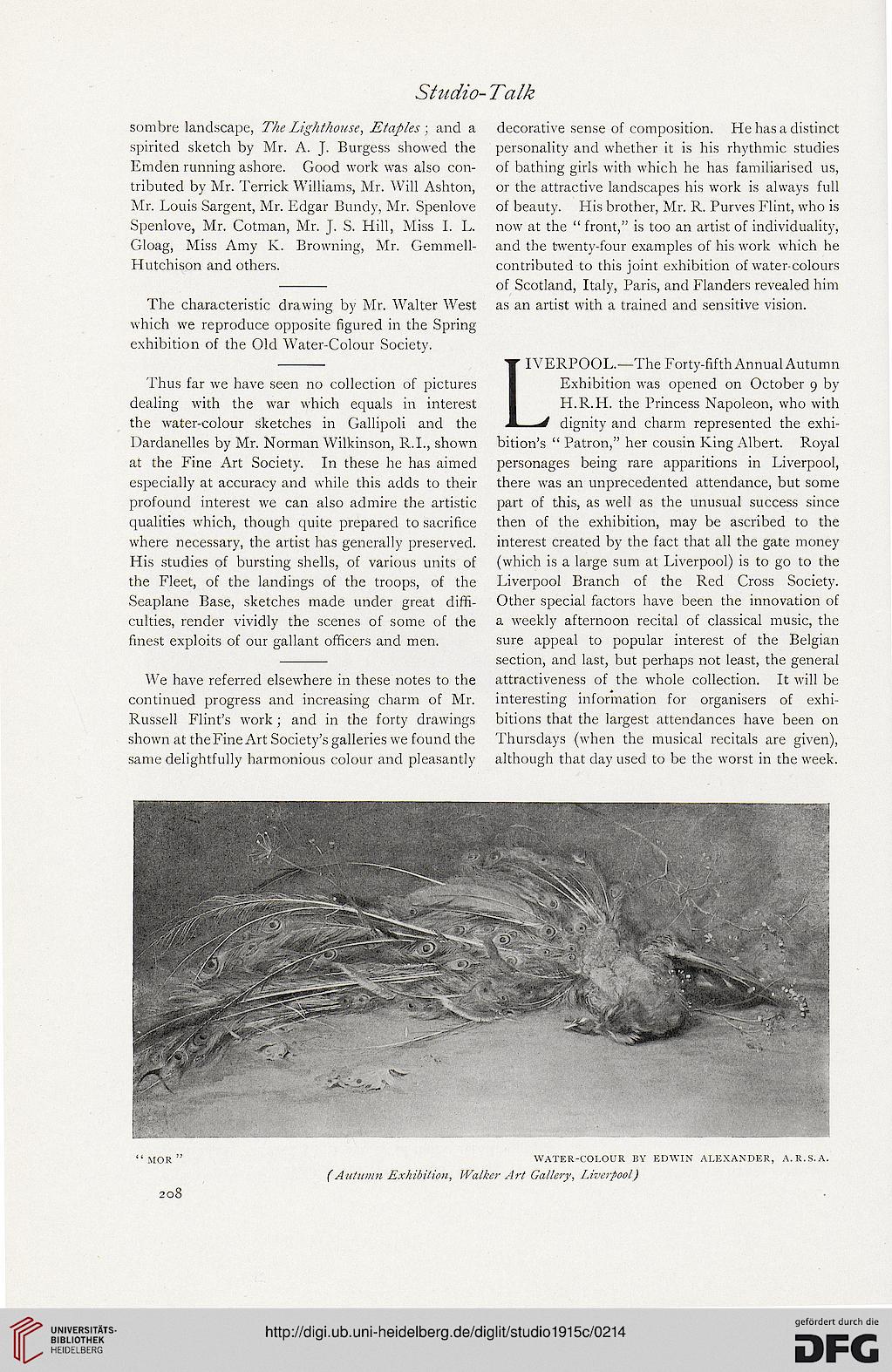 The characteristic drawing by Mr. Walter West
which we reproduce opposite figured in the Spring
exhibition of the Old Water-Colour Society.

Thus far we have seen no collection of pictures
dealing with the war which equals in interest
the water-colour sketches in Gallipoli and the
Dardanelles by Mr. Norman Wilkinson, R.I., shown
at the Fine Art Society. In these he has aimed
especially at accuracy and while this adds to their
profound interest we can also admire the artistic
qualities which, though quite prepared to sacrifice
where necessary, the artist has generally preserved.
His studies of bursting shells, of various units of
the Fleet, of the landings of the troops, of the
Seaplane Base, sketches made under great diffi-
culties, render vividly the scenes of some of the
finest exploits of our gallant officers and men.

We have referred elsewhere in these notes to the
continued progress and increasing charm of Mr.
Russell Flint’s work; and in the forty drawings
shown at the Fine Art Society’s galleries we found the
same delightfully harmonious colour and pleasantly

decorative sense of composition. He has a distinct
personality and whether it is his rhythmic studies
of bathing girls with which he has familiarised us,
or the attractive landscapes his work is always full
of beauty. His brother, Mr. R. Purves Flint, who is
now at the “ front,” is too an artist of individuality,
and the twenty-four examples of his work which he
contributed to this joint exhibition of water-colours
of Scotland, Italy, Paris, and Flanders revealed him
as an artist with a trained and sensitive vision.

TRPOOL.—The Forty-fifth Annual Autumn
Exhibition was opened on October 9 by
H.R.H. the Princess Napoleon, who with
dignity and charm represented the exhi-
bition’s “ Patron,” her cousin King Albert. Royal
personages being rare apparitions in Liverpool,
there was an unprecedented attendance, but some
part of this, as well as the unusual success since
then of the exhibition, may be ascribed to the
interest created by the fact that all the gate money
(which is a large sum at Liverpool) is to go to the
Liverpool Branch of the Red Cross Society.
Other special factors have been the innovation of
a weekly afternoon recital of classical music, the
sure appeal to popular interest of the Belgian
section, and last, but perhaps not least, the general
attractiveness of the whole collection. It will be
interesting information for organisers of exhi-
bitions that the largest attendances have been on
Thursdays (when the musical recitals are given),
although that day used to be the worst in the week.