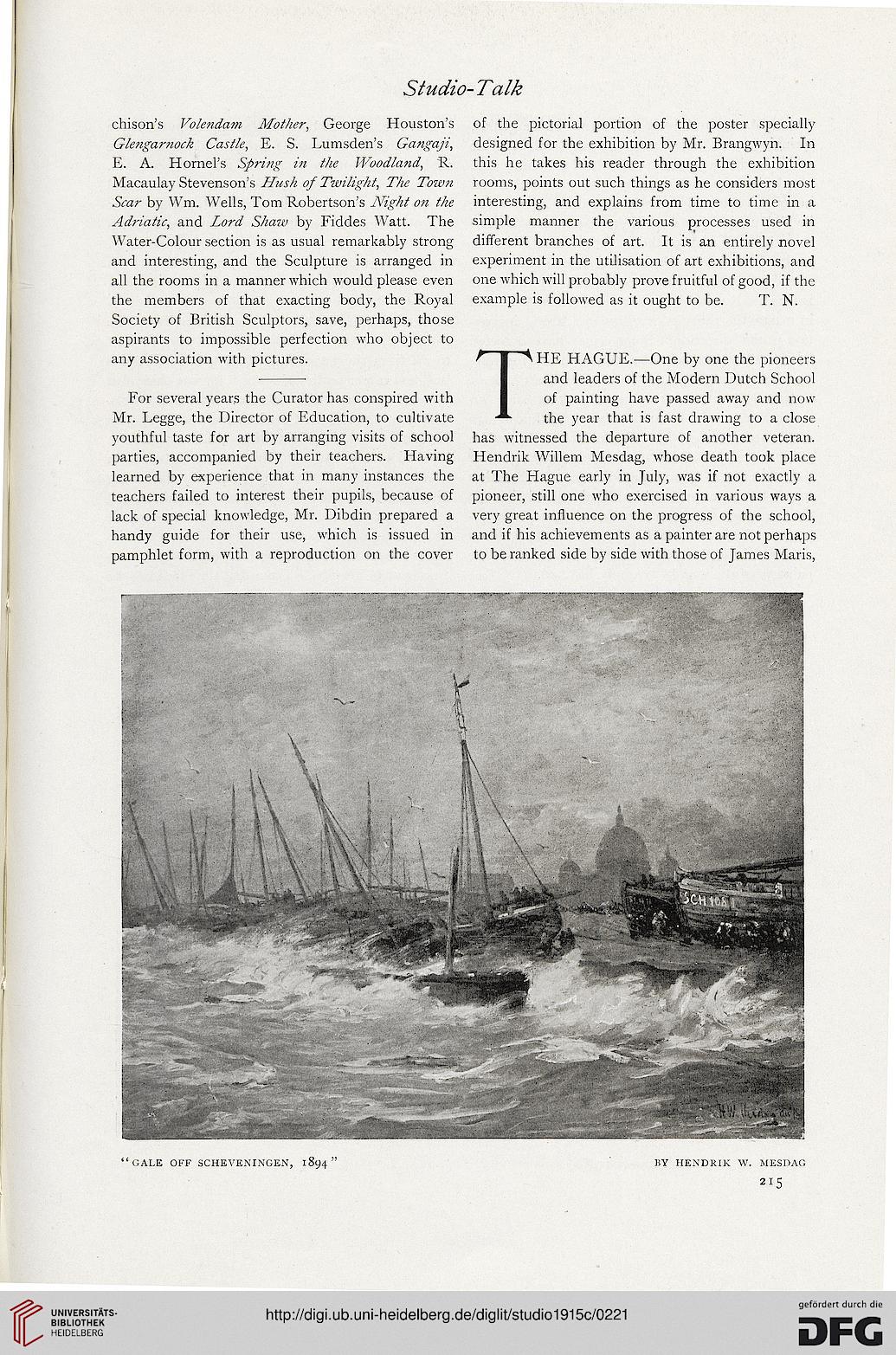 chison’s Volendam Mother, George Houston’s
Glengarnock Castle, E. S. Lumsden’s Gangaji,
E. A. Hornel’s Spring in the Woodland, R.
Macaulay Stevenson’s Hush of Twilight, The Town
Scar by Wm. Wells, Tom Robertson’s Night on the
Adriatic, and Lord Shaw by Fiddes Watt. The
Water-Colour section is as usual remarkably strong
and interesting, and the Sculpture is arranged in
all the rooms in a manner which would please even
the members of that exacting body, the Royal
Society of British Sculptors, save, perhaps, those
aspirants to impossible perfection who object to
any association with pictures.

For several years the Curator has conspired with
Mr. Legge, the Director of Education, to cultivate
youthful taste for art by arranging visits of school
parties, accompanied by their teachers. Having
learned by experience that in many instances the
teachers failed to interest their pupils, because of
lack of special knowledge, Mr. Dibdin prepared a
handy guide for their use, which is issued in
pamphlet form, with a reproduction on the cover

of the pictorial portion of the poster specially
designed for the exhibition by Mr. Brangwyn. In
this he takes his reader through the exhibition
rooms, points out such things as he considers most
interesting, and explains from time to time in a
simple manner the various processes used in
different branches of art. It is an entirely novel
experiment in the utilisation of art exhibitions, and
one which will probably prove fruitful of good, if the
example is followed as it ought to be. T. N.

THE HAGUE.—One by one the pioneers
and leaders of the Modern Dutch School
of painting have passed away and now
the year that is fast drawing to a close
has witnessed the departure of another veteran.
Hendrik Willem Mesdag, whose death took place
at The Hague early in July, was if not exactly a
pioneer, still one who exercised in various ways a
very great influence on the progress of the school,
and if his achievements as a painter are not perhaps
to be ranked side by side with those of James Maris,