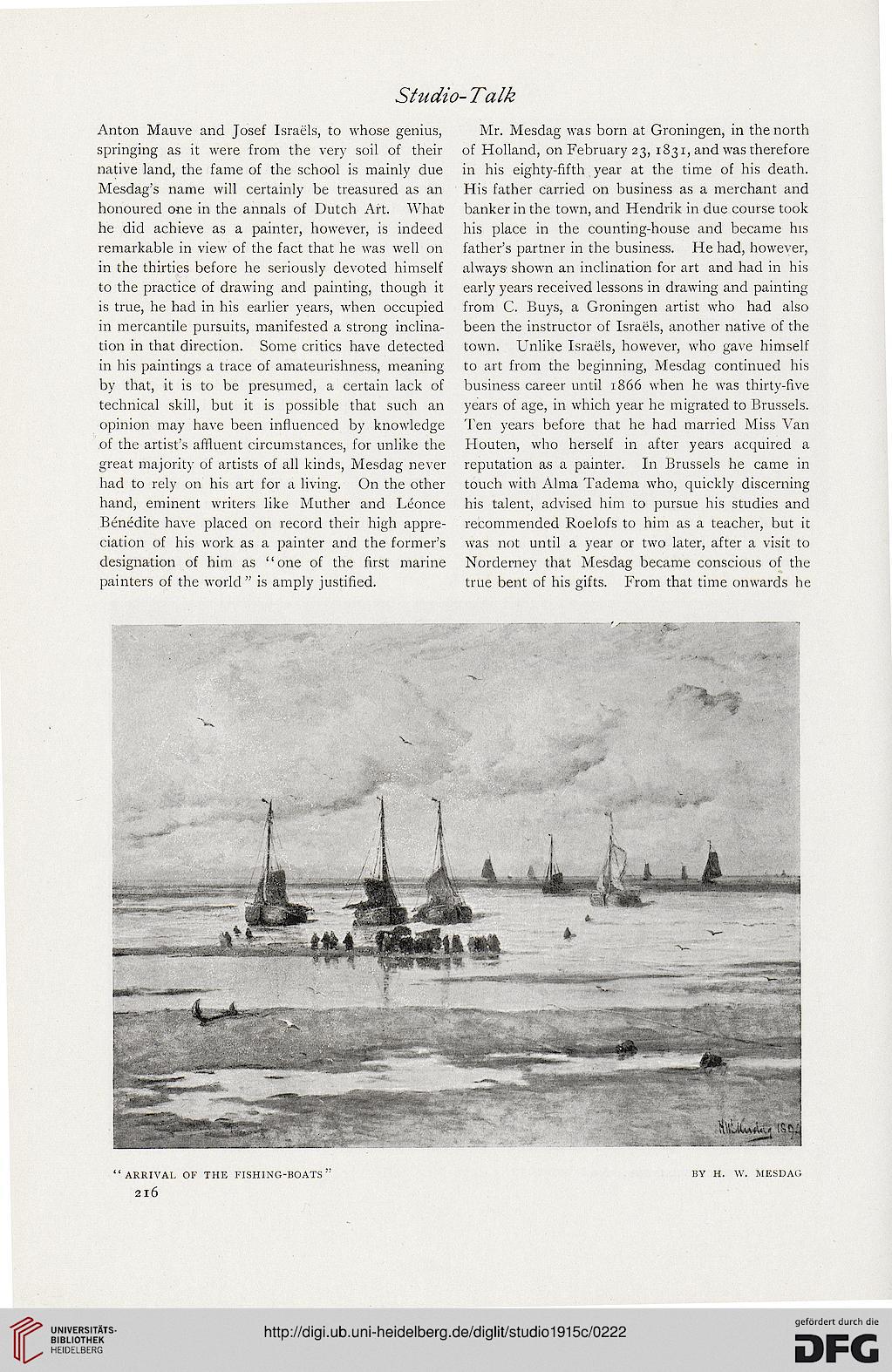 Anton Mauve and Josef Israels, to whose genius,
springing as it were from the very soil of their
native land, the fame of the school is mainly due
Mesdag’s name will certainly be treasured as an
honoured one in the annals of Dutch Art. What;
he did achieve as a painter, however, is indeed
remarkable in view of the fact that he was well on
in the thirties before he seriously devoted himself
to the practice of drawing and painting, though it
is true, he had in his earlier years, when occupied
in mercantile pursuits, manifested a strong inclina-
tion in that direction. Some critics have detected
in his paintings a trace of amateurishness, meaning
by that, it is to be presumed, a certain lack of
technical skill, but it is possible that such an
opinion may have been influenced by knowledge
of the artist’s affluent circumstances, for unlike the
great majority of artists of all kinds, Mesdag never
had to rely on his art for a living. On the other
hand, eminent writers like Muther and Leonce
Benedite have placed on record their high appre-
ciation of his work as a painter and the former’s
designation of him as ‘ ‘ one of the first marine
painters of the world ” is amply justified.

Mr. Mesdag was born at Groningen, in the north
of Holland, on February 23, 1831, and was therefore
in his eighty-fifth year at the time of his death.
His father carried on business as a merchant and
banker in the town, and Hendrik in due course took
his place in the counting-house and became his
father’s partner in the business. He had, however,
always shown an inclination for art and had in his
early years received lessons in drawing and painting
from C. Buys, a Groningen artist who had also
been the instructor of Israels, another native of the
town. Unlike Israels, however, who gave himself
to art from the beginning, Mesdag continued his
business career until 1866 when he was thirty-five
years of age, in which year he migrated to Brussels.
Ten years before that he had married Miss Van
Houten, who herself in after years acquired a
reputation as a painter. In Brussels he came in
touch with Alma Tadema who, quickly discerning
his talent, advised him to pursue his studies and
recommended Roelofs to him as a teacher, but it
was not until a year or two later, after a visit to
Norderney that Mesdag became conscious of the
true bent of his gifts. From that time onwards he

“ARRIVAL OF THE FISHING-BOATS
2l6