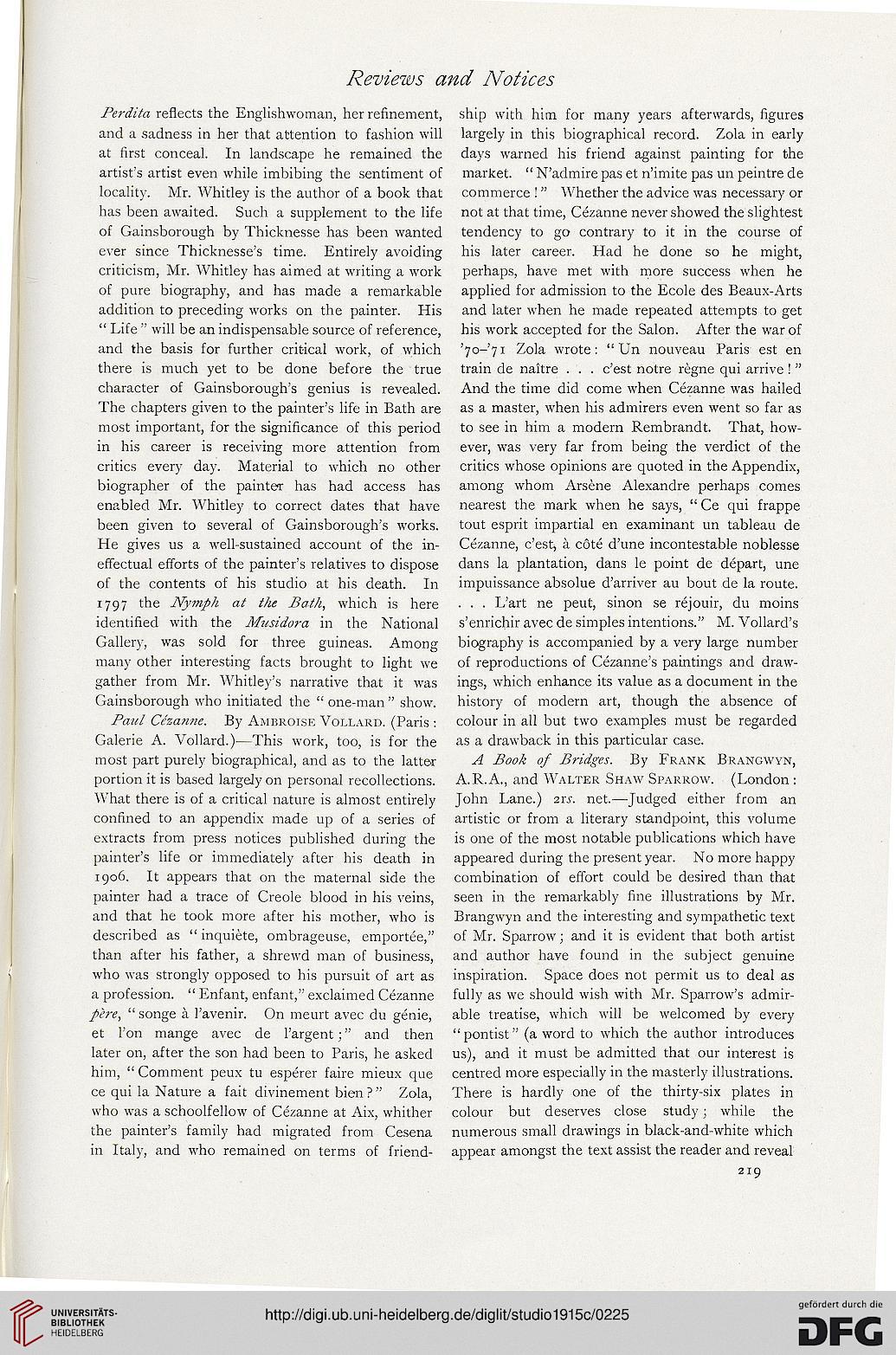 Perdita reflects the Englishwoman, her refinement,
and a sadness in her that attention to fashion will
at first conceal. In landscape he remained the
artist’s artist even while imbibing the sentiment of
locality. Mr. Whitley is the author of a book that
has been awaited. Such a supplement to the life
of Gainsborough by Thicknesse has been wanted
ever since Thicknesse’s time. Entirely avoiding
criticism, Mr. Whitley has aimed at writing a work
of pure biography, and has made a remarkable
addition to preceding works on the painter. His
“ Life ” will be an indispensable source of reference,
and the basis for further critical work, of which
there is much yet to be done before the true
character of Gainsborough’s genius is revealed.
The chapters given to the painter’s life in Bath are
most important, for the significance of this period
in his career is receiving more attention from
critics every day. Material to which no other
biographer of the painter has had access has
enabled Mr. Whitley to correct dates that have
been given to several of Gainsborough’s works.
He gives us a well-sustained account of the in-
effectual efforts of the painter’s relatives to dispose
of the contents of his studio at his death. In
1797 the Nymph at the Bath, which is here
identified with the Musidora in the National
Gallery, was sold for three guineas. Among
many other interesting facts brought to light we
gather from Mr. Whitley’s narrative that it was
Gainsborough who initiated the “ one-man ” show.

Paul Cezanne. By Ambroise Vollard. (Paris :
Galerie A. Vollard.)—This work, too, is for the
most part purely biographical, and as to the latter
portion it is based largely on personal recollections.
What there is of a critical nature is almost entirely
confined to an appendix made up of a series of
extracts from press notices published during the
painter’s life or immediately after his death in
1906. It appears that on the maternal side the
painter had a trace of Creole blood in his veins,
and that he took more after his mother, who is
described as “ inquiete, ombrageuse, emportee,”
than after his father, a shrewd man of business,
who was strongly opposed to his pursuit of art as
a profession. “ Enfant, enfant,” exclaimed Cezanne
p'ere, “ songe a l’avenir. On meurt avec du genie,
et l’on mange avec de l’argent; ” and then
later on, after the son had been to Paris, he asked
him, “ Comment peux tu esperer faire mieux que
ce qui la Nature a fait divinement bien?” Zola,
who was a schoolfellow of Cezanne at Aix, whither
the painter’s family had migrated from Cesena
in Italy, and who remained on terms of friend-

ship with him for many years afterwards, figures
largely in this biographical record. Zola in early
days warned his friend against painting for the
market. “ N’admire pas et n’imite pas un peintre de
commerce ! ” Whether the advice was necessary or
not at that time, Cezanne never showed the slightest
tendency to go contrary to it in the course of
his later career. Had he done so he might,
perhaps, have met with more success when he
applied for admission to the Ecole des Beaux-Arts
and later when he made repeated attempts to get
his work accepted for the Salon. After the war of
’70-71 Zola wrote: “ Un nouveau Paris est en
train de naitre . . . c’est notre regne qui arrive! ”
And the time did come when Cezanne was hailed
as a master, when his admirers even went so far as
to see in him a modern Rembrandt. That, how-
ever, was very far from being the verdict of the
critics whose opinions are quoted in the Appendix,
among whom Arsene Alexandre perhaps comes
nearest the mark when he says, “ Ce qui frappe
tout esprit impartial en examinant un tableau de
Cezanne, c’esfi a cote d’une incontestable noblesse
dans la plantation, dans le point de depart, une
impuissance absolue d’arriver au bout de la route.

. . . L’art ne peut, sinon se rejouir, du moins
s’enrichir avec de simples intentions.” M. Vollard’s
biography is accompanied by a very large number
of reproductions of Cezanne’s paintings and draw-
ings, which enhance its value as a document in the
history of modern art, though the absence of
colour in all but two examples must be regarded
as a drawback in this particular case.

A Book of Bridges. By Frank Brangwyn,
A.R.A., and Walter Shaw Sparrow. (London :
John Lane.) 2rs. net.—Judged either from an
artistic or from a literary standpoint, this volume
is one of the most notable publications which have
appeared during the present year. No more happy
combination of effort could be desired than that
seen in the remarkably fine illustrations by Mr.
Brangwyn and the interesting and sympathetic text
of Mr. Sparrow; and it is evident that both artist
and author have found in the subject genuine
inspiration. Space does not permit us to deal as
fully as we should wish with Mr. Sparrow’s admir-
able treatise, which will be welcomed by every
“pontist” (a word to which the author introduces
us), and it must be admitted that our interest is
centred more especially in the masterly illustrations.
There is hardly one of the thirty-six plates in
colour but deserves close study; while the
numerous small drawings in black-and-white which
appear amongst the text assist the reader and reveal