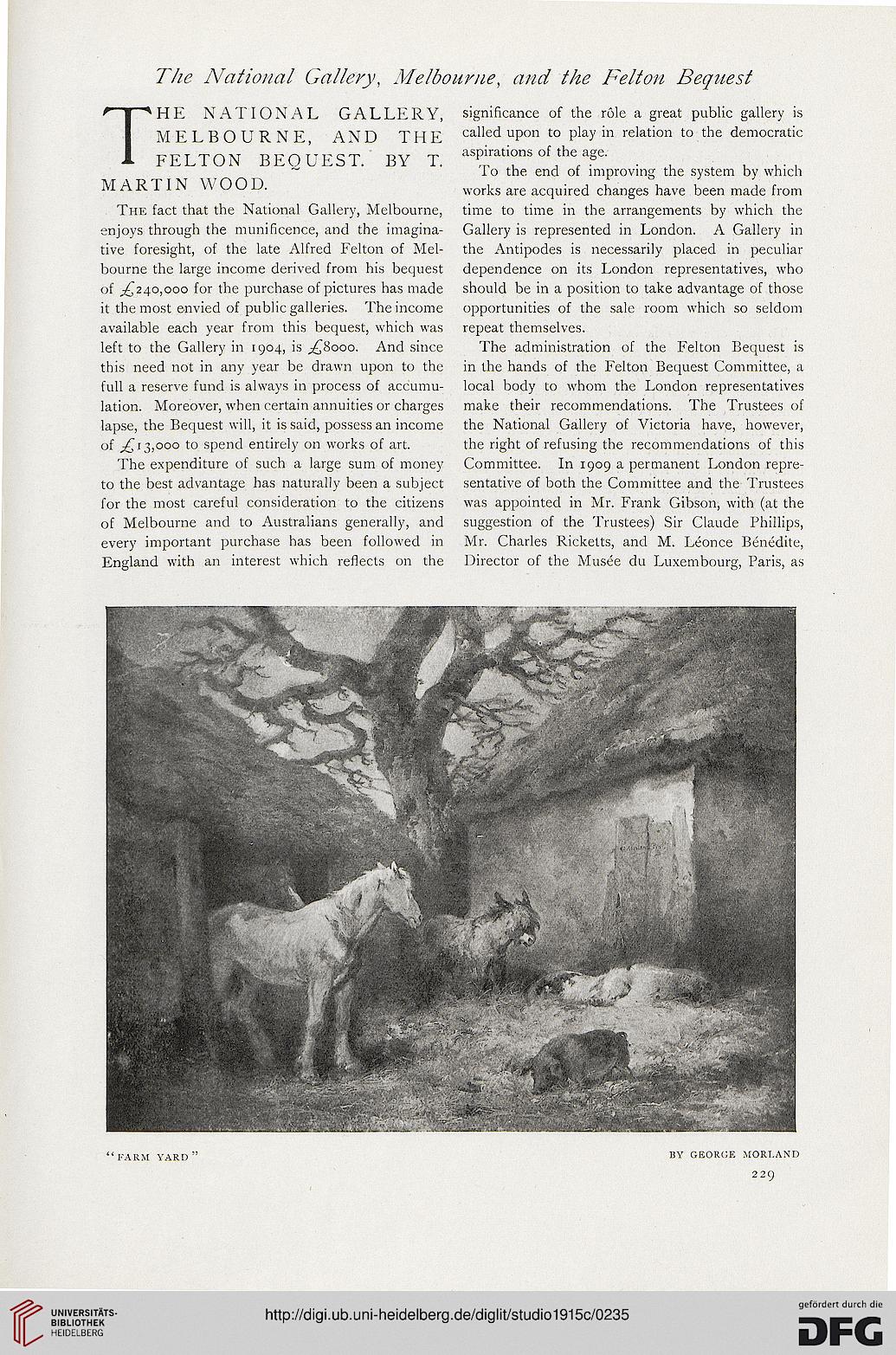 Information about OCR text
The National Gallery, Melbourne, and the Felton Bequest

MELBOURNE, AND THE
FELTON BEQUEST. BY T.
MARTIN WOOD.

The fact that the National Gallery, Melbourne,
enjoys through the munificence, and the imagina-
tive foresight, of the late Alfred Felton of Mel-
bourne the large income derived from his bequest
of ^240,000 for the purchase of pictures has made
it the most envied of public galleries. The income
available each year from this bequest, which was
left to the Gallery in 1904, is ^8000. And since
this need not in any year be drawn upon to the
full a reserve fund is always in process of accumu-
lation. Moreover, when certain annuities or charges
lapse, the Bequest will, it is said, possess an income
of 13,000 to spend entirely on works of art.

The expenditure of such a large sum of money
to the best advantage has naturally been a subject
for the most careful consideration to the citizens
of Melbourne and to Australians generally, and
every important purchase has been followed in
England with an interest which reflects on the

significance of the role a great public gallery is
called upon to play in relation to the democratic
aspirations of the age.

To the end of improving the system by which
works are acquired changes have been made from
time to time in the arrangements by which the
Gallery is represented in London. A Gallery in
the Antipodes is necessarily placed in peculiar
dependence on its London representatives, who
should be in a position to take advantage of those
opportunities of the sale room which so seldom
repeat themselves.

The administration of the Felton Bequest is
in the hands of the Felton Bequest Committee, a
local body to whom the London representatives
make their recommendations. The Trustees of
the National Gallery of Victoria have, however,
the right of refusing the recommendations of this
Committee. In 1909 a permanent London repre-
sentative of both the Committee and the Trustees
was appointed in Mr. Frank Gibson, with (at the
suggestion of the Trustees) Sir Claude Phillips,
Mr. Charles Ricketts, and M. Leonce Benedite,
Director of the Musee du Luxembourg, Paris, as