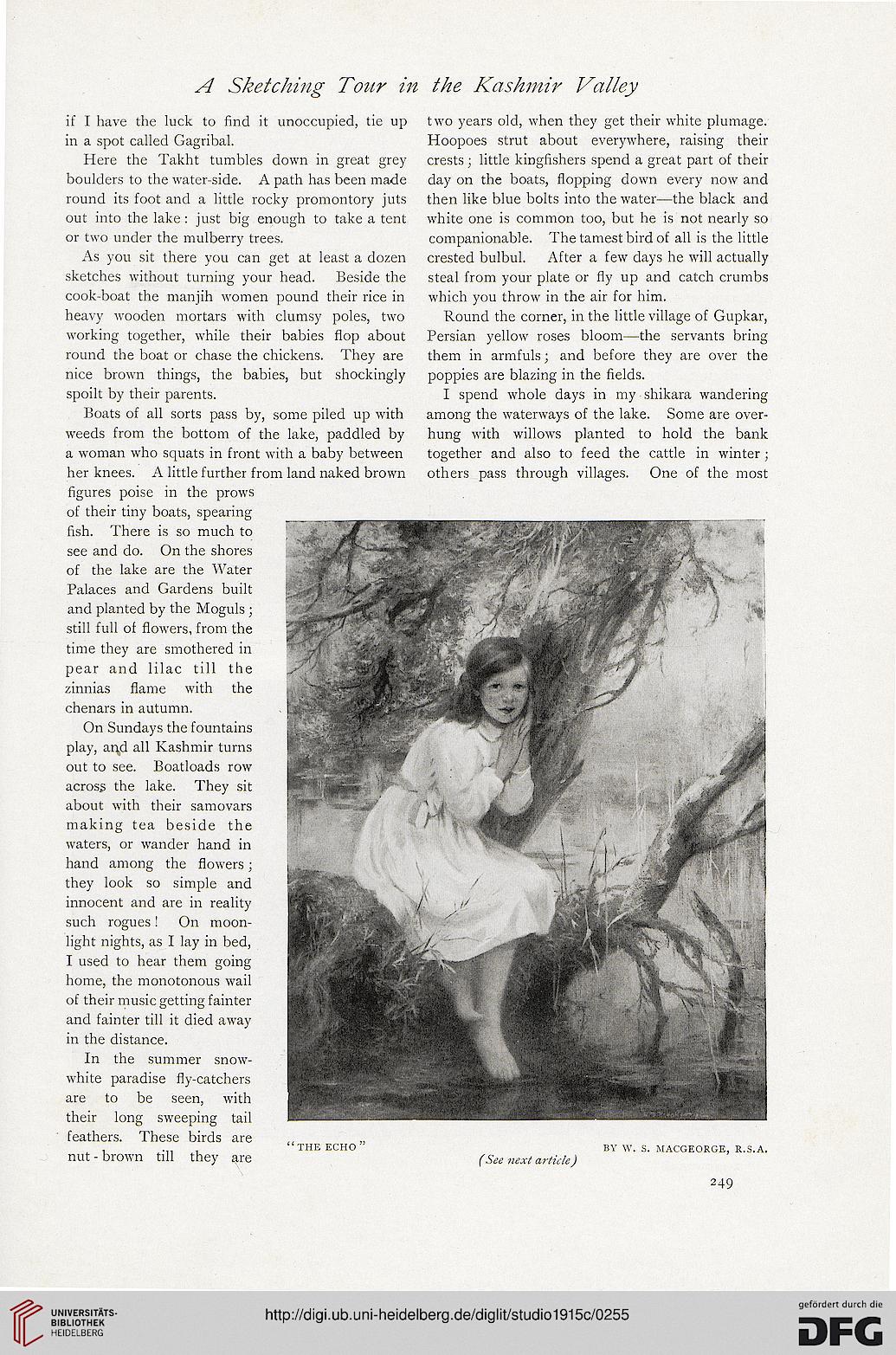 Information about OCR text
A Sketching Tour in the Kashmir Valley

if I have the luck to find it unoccupied, tie up
in a spot called Gagribal.

Here the Takht tumbles down in great grey
boulders to the water-side. A path has been made
round its foot and a little rocky promontory juts
out into the lake: just big enough to take a tent
or two under the mulberry trees.

As you sit there you can get at least a dozen
sketches without turning your head. Beside the
cook-boat the manjih women pound their rice in
heavy wooden mortars with clumsy poles, two
working together, while their babies flop about
round the boat or chase the chickens. They are
nice brown things, the babies, but shockingly
spoilt by their parents.

Boats of all sorts pass by, some piled up with
weeds from the bottom of the lake, paddled by
a woman who squats in front with a baby between
her knees. A little further from land naked brown
figures poise in the prows
of their tiny boats, spearing
fish. There is so much to
see and do. On the shores
of the lake are the Water
Palaces and Gardens built
and planted by the Moguls ;
still full of flowers, from the
time they are smothered in
pear and lilac till the
zinnias flame with the
chenars in autumn.

On Sundays the fountains
play, aryl all Kashmir turns
out to see. Boatloads row
across the lake. They sit
about with their samovars
making tea beside the
waters, or wander hand in
hand among the flowers;
they look so simple and
innocent and are in reality
such rogues! On moon-
light nights, as I lay in bed,

I used to hear them going
home, the monotonous wail
of their music getting fainter
and fainter till it died away
in the distance.

In the summer snow-
white paradise fly-catchers
are to be seen, with
their long sweeping tail
feathers. These birds are

nut - brown till they are

two years old, when they get their white plumage.
Hoopoes strut about everywhere, raising their
crests; little kingfishers spend a great part of their
day on the boats, flopping down every now and
then like blue bolts into the water—the black and
white one is common too, but he is not nearly so
companionable. The tamest bird of all is the little
crested bulbul. After a few days he will actually
steal from your plate or fly up and catch crumbs
which you throw in the air for him.

Round the corner, in the little village of Gupkar,
Persian yellow roses bloom—the servants bring
them in armfuls; and before they are over the
poppies are blazing in the fields.

I spend whole days in my shikara wandering
among the waterways of the lake. Some are over-
hung with willows planted to hold the bank
together and also to feed the cattle in winter;
others pass through villages. One of the most