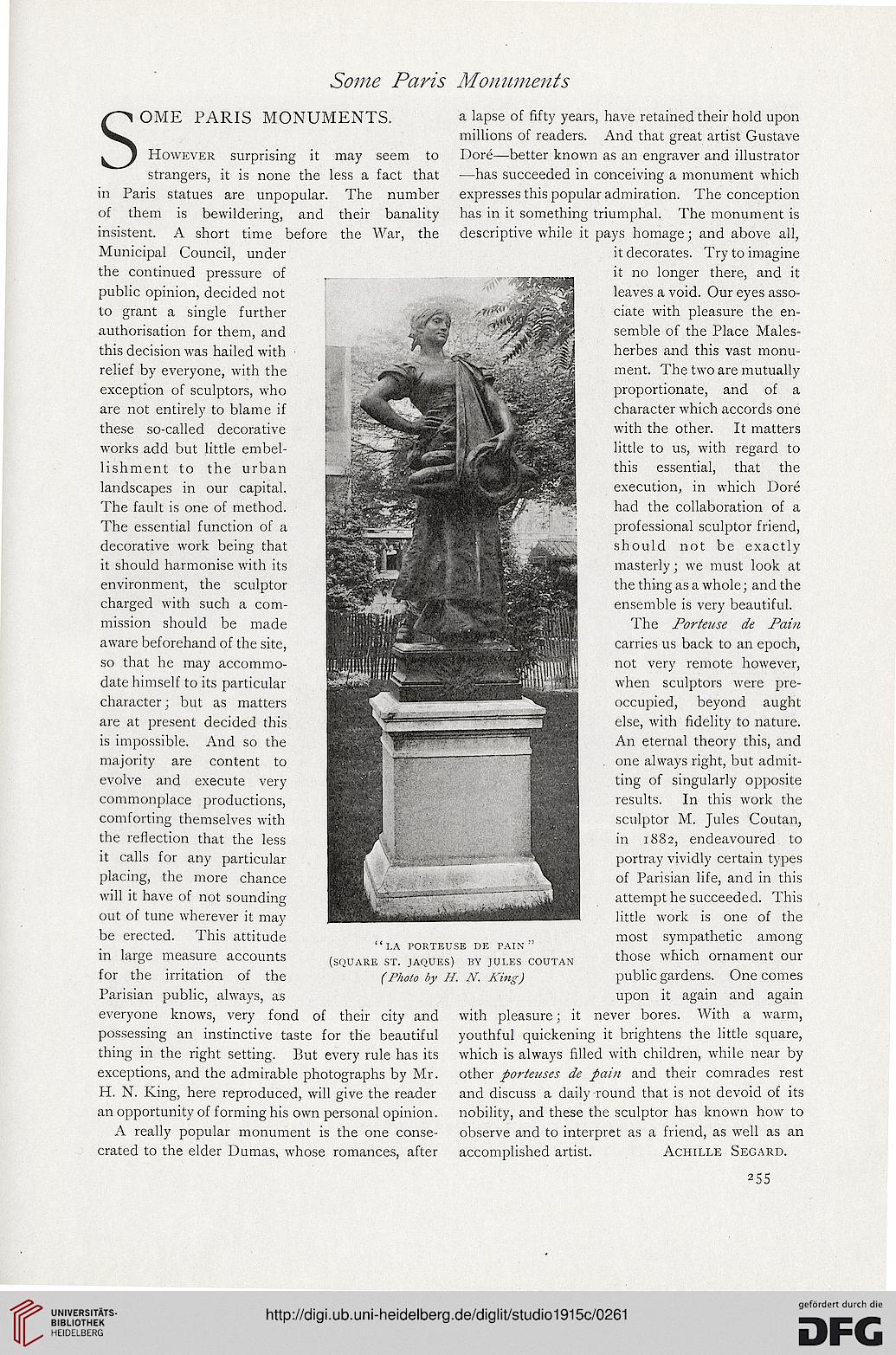 However surprising it may seem to
strangers, it is none the less a fact that
in Paris statues are unpopular. The number
of them is bewildering, and their banality
insistent. A short time before the War, the
Municipal Council, under
the continued pressure of
public opinion, decided not
to grant a single further
authorisation for them, and
this decision was hailed with
relief by everyone, with the
exception of sculptors, who
are not entirely to blame if
these so-called decorative
works add but little embel-
lishment to the urban
landscapes in our capital.

The fault is one of method.

The essential function of a
decorative work being that
it should harmonise with its
environment, the sculptor
charged with such a com-
mission should be made
aware beforehand of the site,
so that he may accommo-
date himself to its particular
character; but as matters
are at present decided this
is impossible. And so the
majority are content to
evolve and execute very
commonplace productions,
comforting themselves with
the reflection that the less
it calls for any particular
placing, the more chance
will it have of not sounding
out of tune wherever it may
be erected. This attitude
in large measure accounts
for the irritation of the
Parisian public, always, as
everyone knows, very fond of their city and
possessing an instinctive taste for the beautiful
thing in the right setting. But every rule has its
exceptions, and the admirable photographs by Mr.
H. N. King, here reproduced, will give the reader
an opportunity of forming his own personal opinion.

A really popular monument is the one conse-
crated to the elder Dumas, whose romances, after

a lapse of fifty years, have retained their hold upon
millions of readers. And that great artist Gustave
Dore—better known as an engraver and illustrator
—has succeeded in conceiving a monument which
expresses this popular admiration. The conception
has in it something triumphal. The monument is
descriptive while it pays homage; and above all,
it decorates. Try to imagine
it no longer there, and it
leaves a void. Our eyes asso-
ciate with pleasure the en-
semble of the Place Males-
herbes and this vast monu-
ment. The two are mutually
proportionate, and of a
character which accords one
with the other. It matters
little to us, with regard to
this essential, that the
execution, in which Dore
had the collaboration of a
professional sculptor friend,
should not be exactly
masterly; we must look at
the thing as a whole; and the
ensemble is very beautiful.

The Porteuse de Pain
carries us back to an epoch,
not very remote however,
when sculptors were pre-
occupied, beyond aught
else, with fidelity to nature.
An eternal theory this, and
one always right, but admit-
ting of singularly opposite
results. In this work the
sculptor M. Jules Coutan,
in 1882, endeavoured to
portray vividly certain types
of Parisian life, and in this
attempt he succeeded. This
little work is one of the
most sympathetic among
those which ornament our
public gardens. One comes
upon it again and again
with pleasure; it never bores. With a warm,
youthful quickening it brightens the little square,
which is always filled with children, while near by
other porteuses de pain and their comrades rest
and discuss a daily round that is not devoid of its
nobility, and these the sculptor has known how to
observe and to interpret as a friend, as well as an
accomplished artist. Achille Segard.