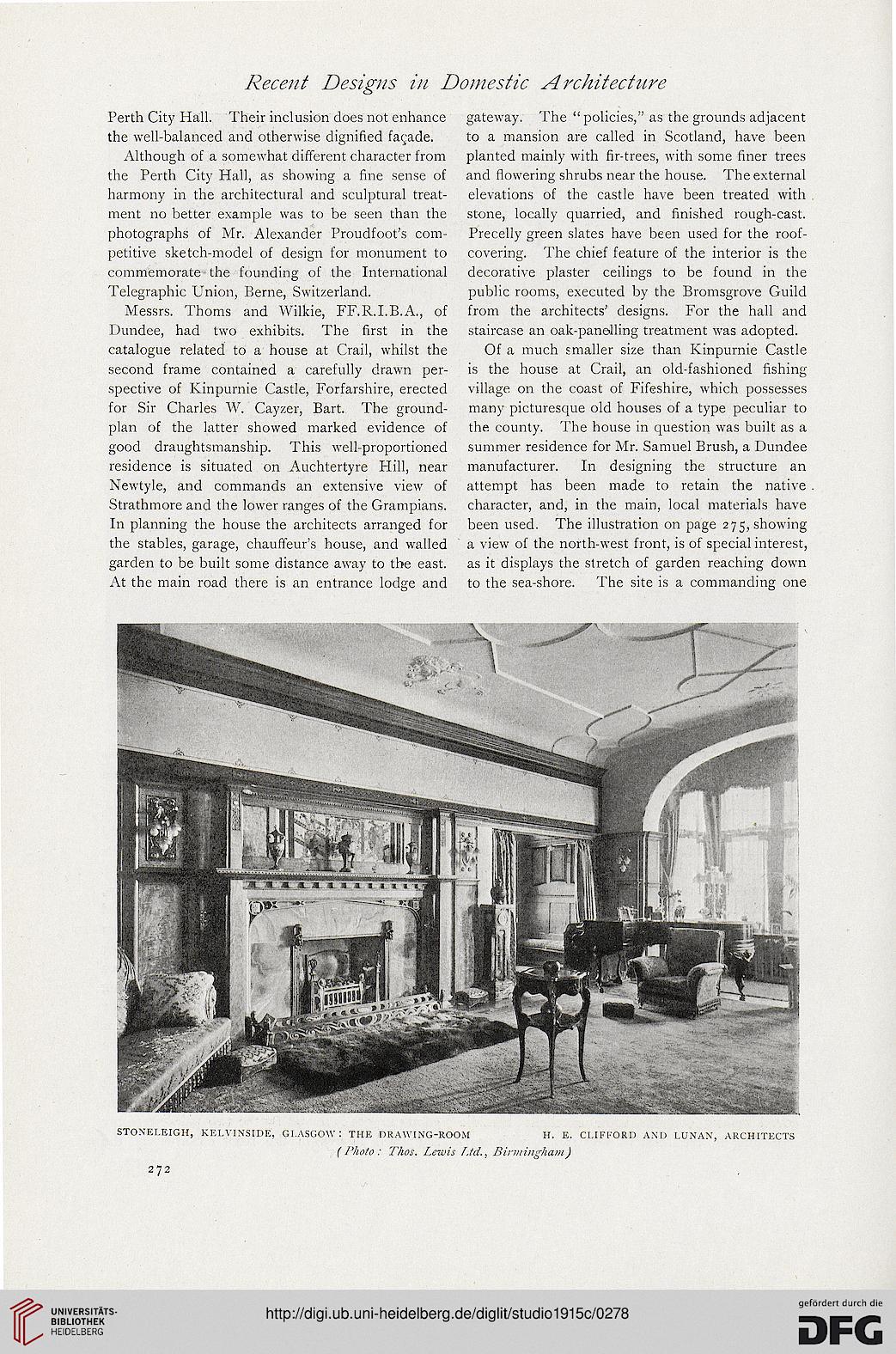 Perth City Hall. Their inclusion does not enhance
the well-balanced and otherwise dignified facade.

Although of a somewhat different character from
the Perth City Hall, as showing a fine sense of
harmony in the architectural and sculptural treat-
ment no better example was to be seen than the
photographs of Mr. Alexander Proudfoot’s com-
petitive sketch-model of design for monument to
commemorate the founding of the International
Telegraphic Union, Berne, Switzerland.

Messrs. Thoms and Wilkie, FF.R.I.B.A., of
Dundee, had two exhibits. The first in the
catalogue related to a house at Crail, whilst the
second frame contained a carefully drawn per-
spective of Kinpurnie Castle, Forfarshire, erected
for Sir Charles W. Cayzer, Bart. The ground-
plan of the latter showed marked evidence of
good draughtsmanship. This well-proportioned
residence is situated on Auchtertyre Hill, near
Newtyle, and commands an extensive view of
Strathmore and the lower ranges of the Grampians.
In planning the house the architects arranged for
the stables, garage, chauffeur’s house, and walled
garden to be built some distance away to the east.
At the main road there is an entrance lodge and

gateway. The “policies,” as the grounds adjacent
to a mansion are called in Scotland, have been
planted mainly with fir-trees, with some finer trees
and flowering shrubs near the house. The external
elevations of the castle have been treated with
stone, locally quarried, and finished rough-cast.
Precelly green slates have been used for the roof-
covering. The chief feature of the interior is the
decorative plaster ceilings to be found in the
public rooms, executed by the Bromsgrove Guild
from the architects’ designs. For the hall and
staircase an oak-panelling treatment was adopted.

Of a much smaller size than Kinpurnie Castle
is the house at Crail, an old-fashioned fishing
village on the coast of Fifeshire, which possesses
many picturesque old houses of a type peculiar to
the county. The house in question was built as a
summer residence for Mr. Samuel Brush, a Dundee
manufacturer. In designing the structure an
attempt has been made to retain the native
character, and, in the main, local materials have
been used. The illustration on page 275, showing
a view of the north-west front, is of special interest,
as it displays the stretch of garden reaching down
to the sea-shore. The site is a commanding one