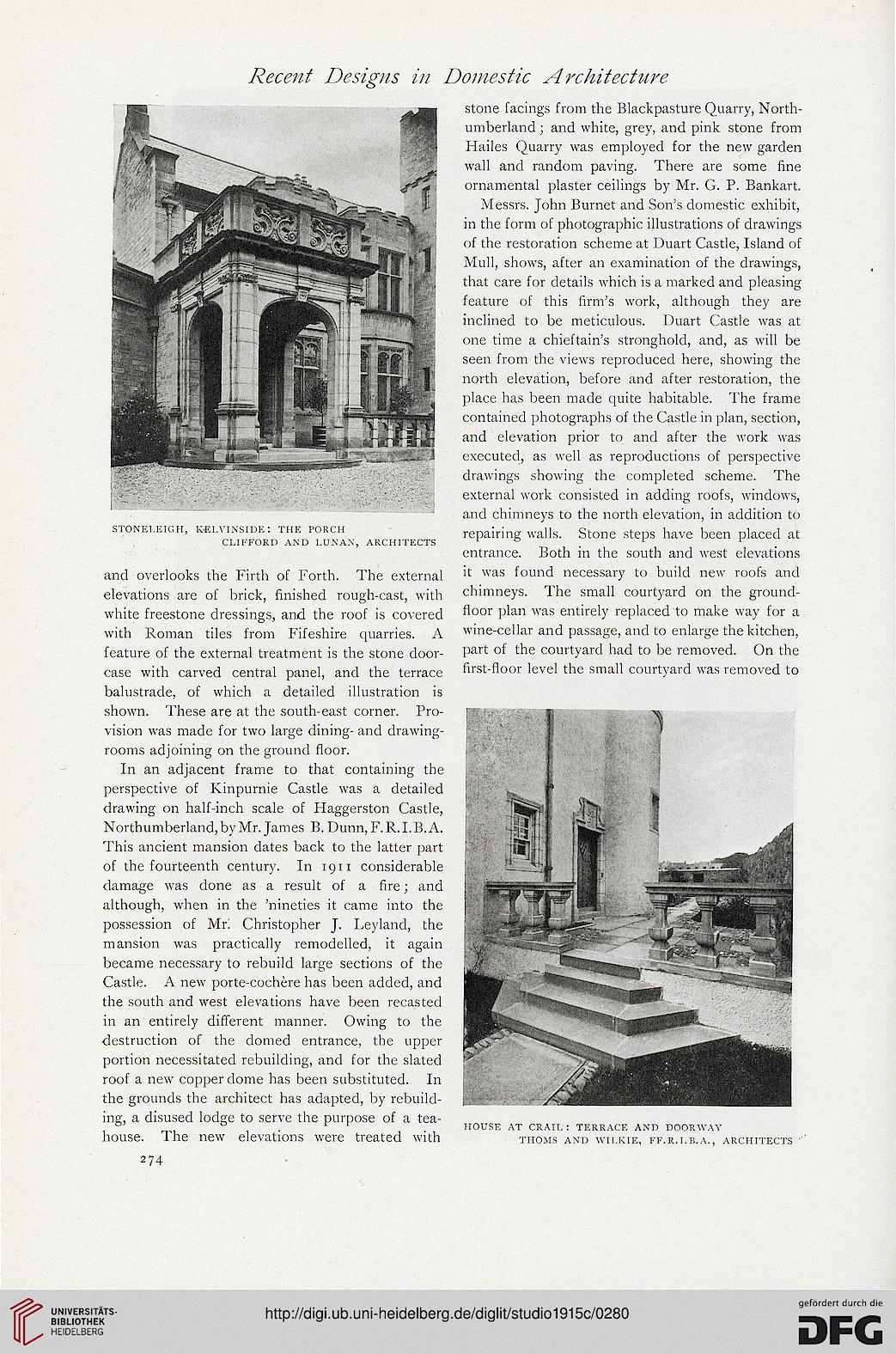 and overlooks the Firth of Forth. The external
elevations are of brick, finished rough-cast, with
white freestone dressings, and the roof is covered
with Roman tiles from Fifeshire quarries. A
feature of the external treatment is the stone door-
case with carved central panel, and the terrace
balustrade, of which a detailed illustration is
shown. These are at the south-east corner. Pro-
vision was made for two large dining- and drawing-
rooms adjoining on the ground floor.

In an adjacent frame to that containing the
perspective of Kinpurnie Castle was a detailed
drawing on half-inch scale of Haggerston Castle,
Northumberland, by Mr. James B. Dunn, F. R. I. B. A.
This ancient mansion dates back to the latter part
of the fourteenth century. In 1911 considerable
damage was done as a result of a fire; and
although, when in the ’nineties it came into the
possession of Mr. Christopher J. Leyland, the
mansion was practically remodelled, it again
became necessary to rebuild large sections of the
Castle. A new porte-cochere has been added, and
the south and west elevations have been recasted
in an entirely different manner. Owing to the
destruction of the domed entrance, the upper
portion necessitated rebuilding, and for the slated
roof a new copper dome has been substituted. In
the grounds the architect has adapted, by rebuild-
ing, a disused lodge to serve the purpose of a tea-
house. The new elevations were treated with
274

stone facings from the Blackpasture Quarry, North-
umberland ; and white, grey, and pink stone from
Hailes Quarry was employed for the new garden
wall and random paving. There are some fine
ornamental plaster ceilings by Mr. G. P. Bankart.

Messrs. John Burnet and Son’s domestic exhibit,
in the form of photographic illustrations of drawings
of the restoration scheme at Duart Castle, Island of
Mull, shows, after an examination of the drawings,
that care for details which is a marked and pleasing
feature of this firm’s work, although they are
inclined to be meticulous. Duart Castle was at
one time a chieftain’s stronghold, and, as will be
seen from the views reproduced here, showing the
north elevation, before and after restoration, the
place has been made quite habitable. The frame
contained photographs of the Castle in plan, section,
and elevation prior to and after the work was
executed, as well as reproductions of perspective
drawings showing the completed scheme. The
external work consisted in adding roofs, windows,
and chimneys to the north elevation, in addition to
repairing walls. Stone steps have been placed at
entrance. Both in the south and west elevations
it was found necessary to build new roofs and
chimneys. The small courtyard on the ground-
floor plan was entirely replaced to make way for a
wine-cellar and passage, and to enlarge the kitchen,
part of the courtyard had to be removed. On the
first-floor level the small courtyard was removed to

HOUSE AT CRAIL : TERRACE AND DOORWAY