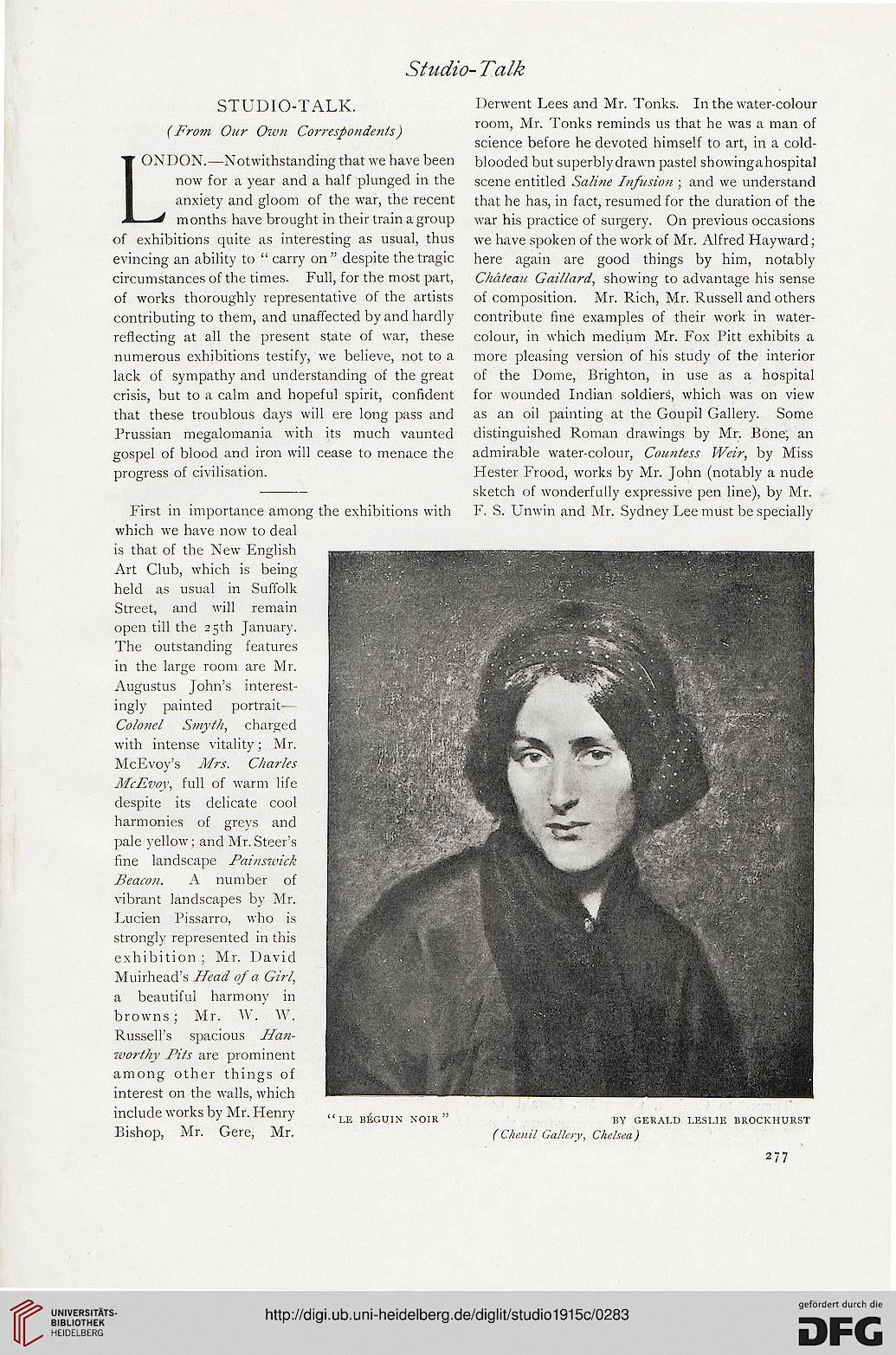 CDON.—Notwithstanding that we have been
now for a year and a half plunged in the
anxiety and gloom of the war, the recent
months have brought in their train a group
of exhibitions quite as interesting as usual, thus
evincing an ability to “ carry on ” despite the tragic
circumstances of the times. Full, for the most part,
of works thoroughly representative of the artists
contributing to them, and unaffected by and hardly
reflecting at all the present state of war, these
numerous exhibitions testify, we believe, not to a
lack of sympathy and understanding of the great
crisis, but to a calm and hopeful spirit, confident
that these troublous days will ere long pass and
Prussian megalomania with its much vaunted
gospel of blood and iron will cease to menace the
progress of civilisation.

First in importance among the exhibitions with
which we have now to deal
is that of the New English
Art Club, which is being
held as usual in Suffolk
Street, and will remain
open till the 25th January.

The outstanding features
in the large room are Mr.

Lucien Pissarro, who is
strongly represented in this
exhibition ; Mr. David
Muirhead’s Head of a Girl,
a beautiful harmony in
browns; Mr. W. W.

Russell’s spacious Han-
worthy Pits are prominent
among other things of
interest on the walls, which
include works by Mr. Henry
Bishop, Mr. Gere, Mr.

Derwent Lees and Mr. Tonks. In the water-colour
room, Mr. Tonks reminds us that he was a man of
science before he devoted himself to art, in a cold-
blooded but superbly drawn pastel showingahospital
scene entitled Saline Infusion ; and we understand
that he has, in fact, resumed for the duration of the
war his practice of surgery. On previous occasions
we have spoken of the work of Mr. Alfred Hayward;
here again are good things by him, notably
Chateau Gaillard, showing to advantage his sense
of composition. Mr. Rich, Mr. Russell and others
contribute fine examples of their work in water-
colour, in which medium Mr. Fox Pitt exhibits a
more pleasing version of his study of the interior
of the Dome, Brighton, in use as a hospital
for wounded Indian soldiers, which was on view
as an oil painting at the Goupil Gallery. Some
distinguished Roman drawings by Mr. Bone, an
admirable water-colour, Countess Weir, by Miss
Hester Frood, works by Mr. John (notably a nude
sketch of wonderfully expressive pen line), by Mr.
F. S. Unwin and Mr. Sydney Lee must be specially