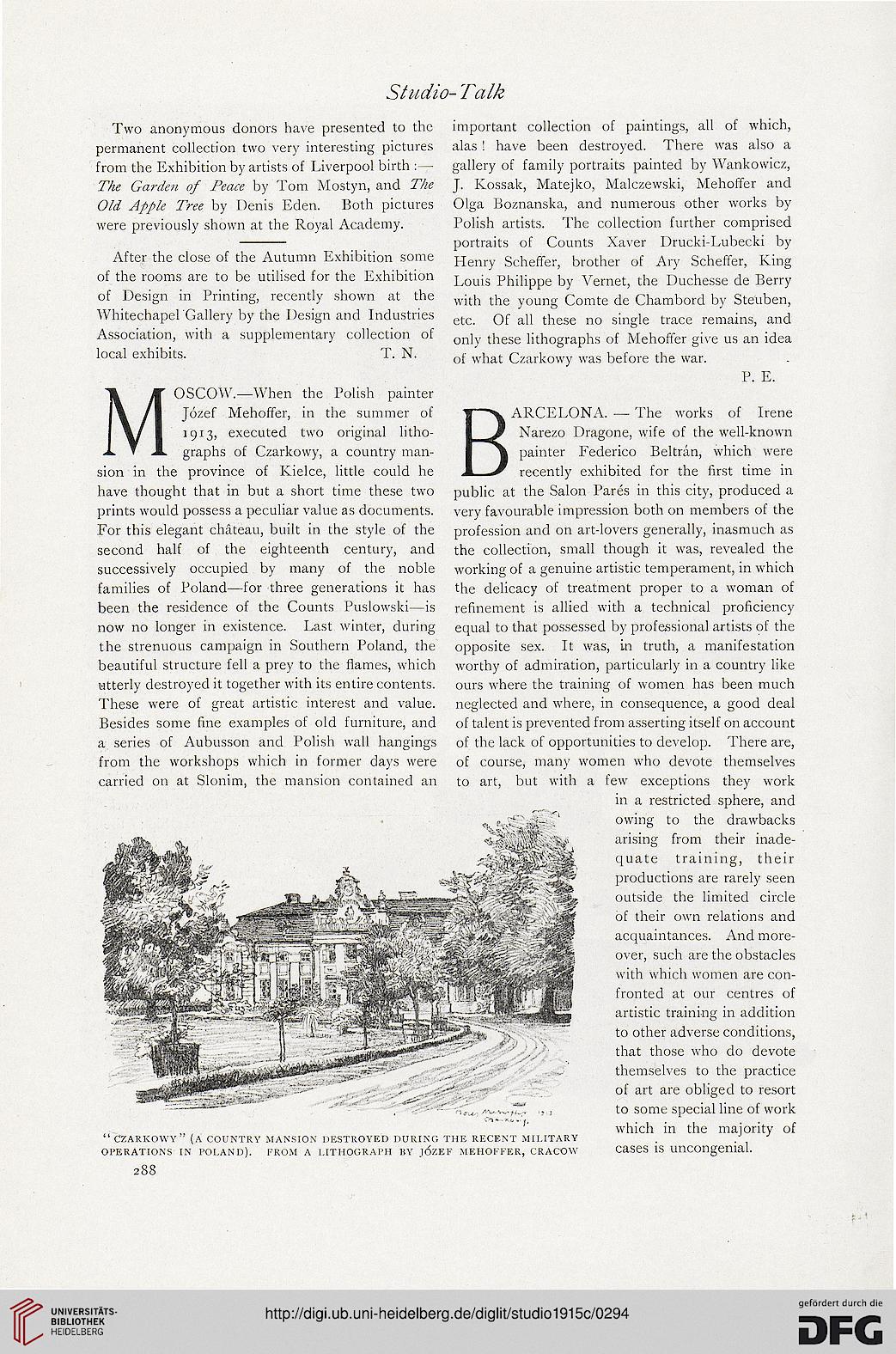 Two anonymous donors have presented to the
permanent collection two very interesting pictures
from the Exhibition by artists of Liverpool birth :—
The Garden of Peace by Tom Mostyn, and The
Old Apple Tree by Denis Eden. Both pictures
were previously shown at the Royal Academy.

After the close of the Autumn Exhibition some
of the rooms are to be utilised for the Exhibition
of Design in Printing, recently shown at the
Whitechapel Gallery by the Design and Industries
Association, with a supplementary collection of
local exhibits. T. N.

MOSCOW.—When the Polish painter
Jozef Mehoffer, in the summer of
1913, executed two original litho-
graphs of Czarkowy, a country man-
sion in the province of Kielce, little could he
have thought that in but a short time these two
prints would possess a peculiar value as documents.
For this elegant chateau, built in the style of the
second half of the eighteenth century, and
successively occupied by many of the noble
families of Poland—for three generations it has
been the residence of the Counts Puslowski—is
now no longer in existence. Last winter, during
the strenuous campaign in Southern Poland, the
beautiful structure fell a prey to the flames, which
utterly destroyed it together with its entire contents.
These were of great artistic interest and value.
Besides some fine examples of old furniture, and
a series of Aubusson and Polish wall hangings
from the workshops which in former days were
carried on at Slonim, the mansion contained an

important collection of paintings, all of which,
alas! have been destroyed. There was also a
gallery of family portraits painted by Wankowicz,
J. Kossak, Matejko, Malczewski, Mehoffer and
Olga Boznanska, and numerous other works by
Polish artists. The collection further comprised
portraits of Counts Xaver Drucki-Lubecki by
Henry Scheffer, brother of Ary Scheffer, King
Louis Philippe by Vernet, the Duchesse de Berry
with the young Comte de Chambord by Steuben,
etc. Of all these no single trace remains, and
only these lithographs of Mehoffer give us an idea
of what Czarkowy was before the war.

BARCELONA. — The works of Irene
Narezo Dragone, wife of the well-known
painter Federico Beltran, which were
recently exhibited for the first time in
public at the Salon Pares in this city, produced a
very favourable impression both on members of the
profession and on art-lovers generally, inasmuch as
the collection, small though it was, revealed the
working of a genuine artistic temperament, in which
the delicacy of treatment proper to a woman of
refinement is allied with a technical proficiency
equal to that possessed by professional artists of the
opposite sex. It was, in truth, a manifestation
worthy of admiration, particularly in a country like
ours where the training of women has been much
neglected and where, in consequence, a good deal
of talent is prevented from asserting itself on account
of the lack of opportunities to develop. There are,
of course, many women who devote themselves
to art, but with a few exceptions they work
in a restricted sphere, and
owing to the drawbacks
arising from their inade-
quate training, their
productions are rarely seen
outside the limited circle
of their own relations and
acquaintances. And more-
over, such are the obstacles
with which women are con-
fronted at our centres of
artistic training in addition
to other adverse conditions,
that those who do devote
themselves to the practice
of art are obliged to resort
to some special line of work
which in the majority of
cases is uncongenial.

“ czarkowy” (a country mansion destroyed during the recent military

OPERATIONS IN POLAND). FROM A LITHOGRAPH BY jdzEF MEHOFFER, CRACOW
288