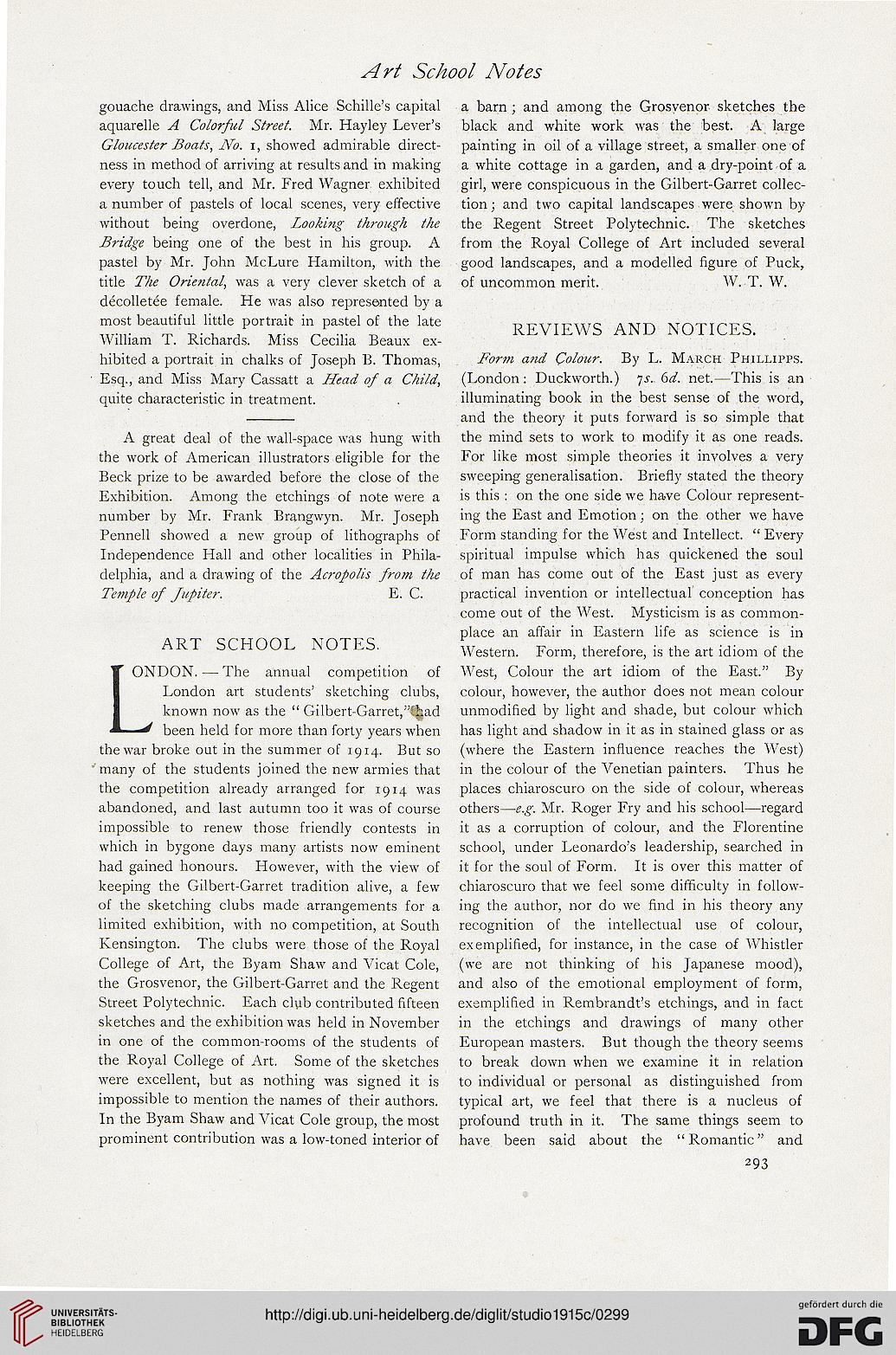 gouache drawings, and Miss Alice Schille’s capital
aquarelle A Colorful Street. Mr. Hayley Lever’s
Gloucester Boats, No. i, showed admirable direct-
ness in method of arriving at results and in making
every touch tell, and Mr. Fred Wagner exhibited
a number of pastels of local scenes, very effective
without being overdone, Looking through the
Bridge being one of the best in his group. A
pastel by Mr. John McLure Hamilton, with the
title The Oriental, was a very clever sketch of a
decolletee female. He was also represented by a
most beautiful little portrait in pastel of the late
William T. Richards. Miss Cecilia Beaux ex-
hibited a portrait in chalks of Joseph B. Thomas,

' Esq., and Miss Mary Cassatt a Head of a Child.,
quite characteristic in treatment.

A great deal of the wall-space was hung with
the work of American illustrators eligible for the
Beck prize to be awarded before the close of the
Exhibition. Among the etchings of note were a
number by Mr. Frank Brangwyn. Mr. Joseph
Pennell showed a new group of lithographs of
Independence Hall and other localities in Phila-
delphia, and a drawing of the Acropolis from the
Temple of Jupiter. E. C.

LONDON. — The annual competition of
London art students’ sketching clubs,
known now as the “ Gilbert-Garret,”t£>ad
—^ been held for more than forty years when
the war broke out in the summer of 1914. But so
' many of the students joined the new armies that
the competition already arranged for 1914 was
abandoned, and last autumn too it was of course
impossible to renew those friendly contests in
which in bygone days many artists now eminent
had gained honours. However, with the view of
keeping the Gilbert-Garret tradition alive, a few
of the sketching clubs made arrangements for a
limited exhibition, with no competition, at South
Kensington. The clubs were those of the Royal
College of Art, the Byam Shaw and Vicat Cole,
the Grosvenor, the Gilbert-Garret and the Regent
Street Polytechnic. Each club contributed fifteen
sketches and the exhibition was held in November
in one of the common-rooms of the students of
the Royal College of Art. Some of the sketches
were excellent, but as nothing was signed it is
impossible to mention the names of their authors.
In the Byam Shaw and Vicat Cole group, the most
prominent contribution was a low-toned interior of

a barn ; and among the Grosvenor sketches the
black and white work was the best. A large
painting in oil of a village street, a smaller one of
a white cottage in a garden, and a dry-point of a
girl, were conspicuous in the Gilbert-Garret collec-
tion ; and two capital landscapes were shown by
the Regent Street Polytechnic. The sketches
from the Royal College of Art included several
good landscapes, and a modelled figure of Puck,
of uncommon merit. W. T. W.

Fomn and Colotir. By L. March Phillipps.
(London: Duckworth.) ys. 6d. net.—This is an
illuminating book in the best sense of the word,
and the theory it puts forward is so simple that
the mind sets to work to modify it as one reads.
For like most simple theories it involves a very
sweeping generalisation. Briefly stated the theory
is this : on the one side we have Colour represent-
ing the East and Emotion; on the other we have
Form standing for the West and Intellect. “ Every
spiritual impulse which has quickened the soul
of man has come out of the East just as every
practical invention or intellectual conception has
come out of the West. Mysticism is as common-
place an affair in Eastern life as science is in
Western. Form, therefore, is the art idiom of the
West, Colour the art idiom of the East.” By
colour, however, the author does not mean colour
unmodified by light and shade, but colour which
has light and shadow in it as in stained glass or as
(where the Eastern influence reaches the West)
in the colour of the Venetian painters. Thus he
places chiaroscuro on the side of colour, whereas
others—e.g. Mr. Roger Fry and his school—regard
it as a corruption of colour, and the Florentine
school, under Leonardo’s leadership, searched in
it for the soul of Form. It is over this matter of
chiaroscuro that we feel some difficulty in follow-
ing the author, nor do we find in his theory any
recognition of the intellectual use of colour,
exemplified, for instance, in the case of Whistler
(we are not thinking of his Japanese mood),
and also of the emotional employment of form,
exemplified in Rembrandt’s etchings, and in fact
in the etchings and drawings of many other
European masters. But though the theory seems
to break down when we examine it in relation
to individual or personal as distinguished from
typical art, we feel that there is a nucleus of
profound truth in it. The same things seem to
have been said about the “ Romantic ” and