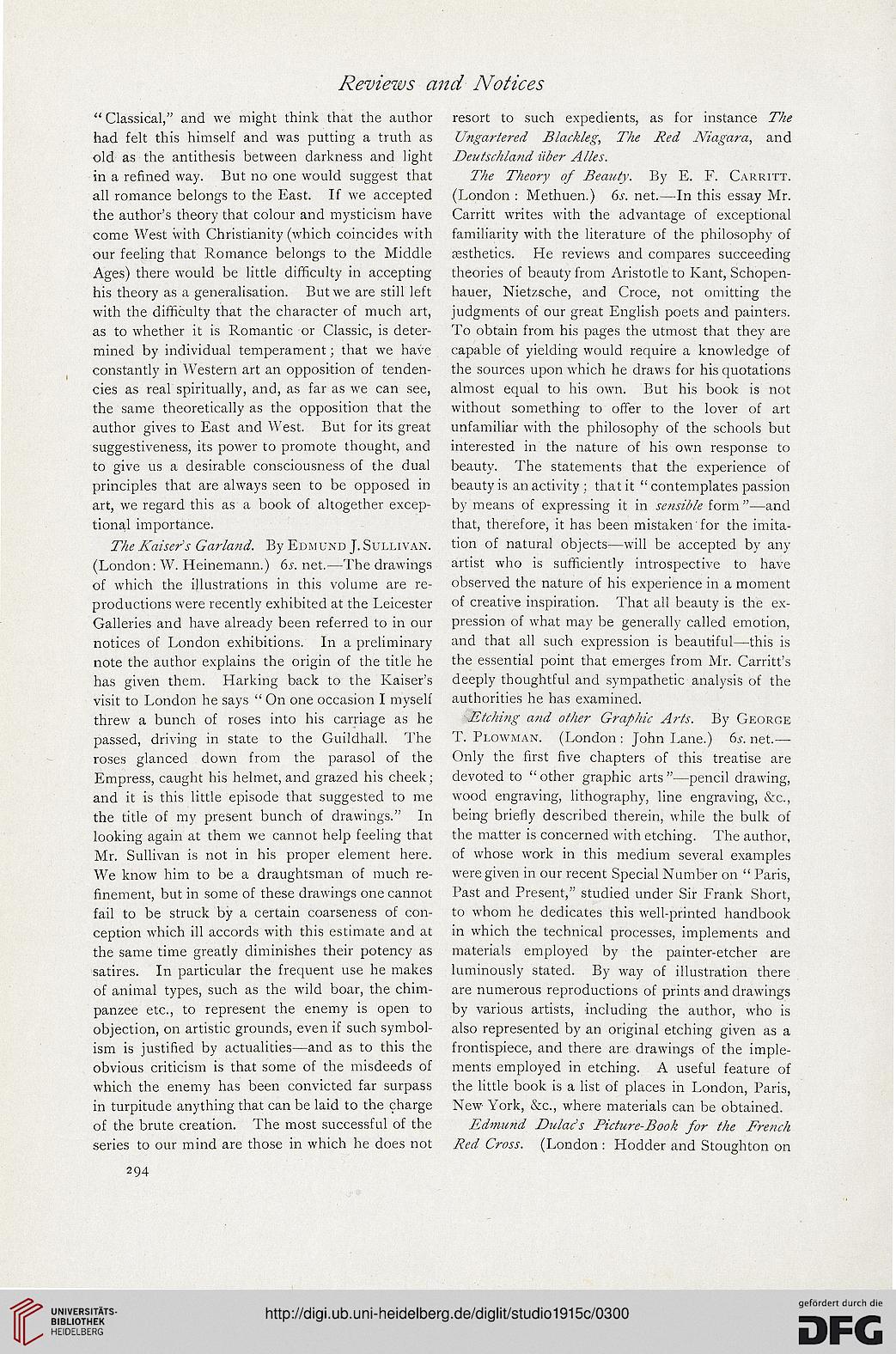 “ Classical,” and we might think that the author
had felt this himself and was putting a truth as
old as the antithesis between darkness and light
in a refined way. But no one would suggest that
all romance belongs to the East. If we accepted
the author’s theory that colour and mysticism have
come West with Christianity (which coincides with
our feeling that Romance belongs to the Middle
Ages) there would be little difficulty in accepting
his theory as a generalisation. But we are still left
with the difficulty that the character of much art,
as to whether it is Romantic or Classic, is deter-
mined by individual temperament; that we have
constantly in Western art an opposition of tenden-
cies as real spiritually, and, as far as we can see,
the same theoretically as the opposition that the
author gives to East and West. But for its great
suggestiveness, its power to promote thought, and
to give us a desirable consciousness of the dual
principles that are always seen to be opposed in
art, we regard this as a book of altogether excep-
tional importance.

The Kaisers Garland. By Edmund J. Sullivan.
(London: W. Heinemann.) 6s. net.—The drawings
of which the illustrations in this volume are re-
productions were recently exhibited at the Leicester
Galleries and have already been referred to in our
notices of London exhibitions. In a preliminary
note the author explains the origin of the title he
has given them. Harking back to the Kaiser’s
visit to London he says “ On one occasion I myself
threw a bunch of roses into his carriage as he
passed, driving in state to the Guildhall. The
roses glanced down from the parasol of the
Empress, caught his helmet, and grazed his cheek ;
and it is this little episode that suggested to me
the title of my present bunch of drawings.” In
looking again at them we cannot help feeling that
Mr. Sullivan is not in his proper element here.
We know him to be a draughtsman of much re-
finement, but in some of these drawings one cannot
fail to be struck by a certain coarseness of con-
ception which ill accords with this estimate and at
the same time greatly diminishes their potency as
satires. In particular the frequent use he makes
of animal types, such as the wild boar, the chim-
panzee etc., to represent the enemy is open to
objection, on artistic grounds, even if such symbol-
ism is justified by actualities—and as to this the
obvious criticism is that some of the misdeeds of
which the enemy has been convicted far surpass
in turpitude anything that can be laid to the charge
of the brute creation. The most successful of the
series to our mind are those in which he does not

resort to such expedients, as for instance The
Ungartered Blackleg, The Red Niagara, and
Deutschland liber A lies.

The Theory of Beauty. By E. F. Carritt.
(London : Methuen.) 6s. net.—In this essay Mr.
Carritt writes with the advantage of exceptional
familiarity with the literature of the philosophy of
aesthetics. He reviews and compares succeeding
theories of beauty from Aristotle to Kant, Schopen-
hauer, Nietzsche, and Croce, not omitting the
judgments of our great English poets and painters.
To obtain from his pages the utmost that they are
capable of yielding would require a knowledge of
the sources upon which he draws for his quotations
almost equal to his own. But his book is not
without something to offer to the lover of art
unfamiliar with the philosophy of the schools but
interested in the nature of his own response to
beauty. The statements that the experience of
beauty is an activity; that it “ contemplates passion
by means of expressing it in sensible form ”—and
that, therefore, it has been mistaken for the imita-
tion of natural objects—will be accepted by any
artist who is sufficiently introspective to have
observed the nature of his experience in a moment
of creative inspiration. That all beauty is the ex-
pression of what may be generally called emotion,
and that all such expression is beautiful—this is
the essential point that emerges from Mr. Carritt’s
deeply thoughtful and sympathetic analysis of the
authorities he has examined.

Etching and other Graphic Arts. By George
T. Plowman. (London : John Lane.) 6s-. net.—
Only the first five chapters of this treatise are
devoted to “ other graphic arts ”—pencil drawing,
wood engraving, lithography, line engraving, &c.,
being briefly described therein, while the bulk of
the matter is concerned with etching. The author,
of whose work in this medium several examples
were given in our recent Special Number on “ Paris,
Past and Present,” studied under Sir Frank Short,
to whom he dedicates this well-printed handbook
in which the technical processes, implements and
materials employed by the painter-etcher are
luminously stated. By way of illustration there
are numerous reproductions of prints and drawings
by various artists, including the author, who is
also represented by an original etching given as a
frontispiece, and there are drawings of the imple-
ments employed in etching. A useful feature of
the little book is a list of places in London, Paris,
New York, &c., where materials can be obtained.

Edmund Dulads Picture-Book for the French
Red Cross. (London : Hodder and Stoughton on