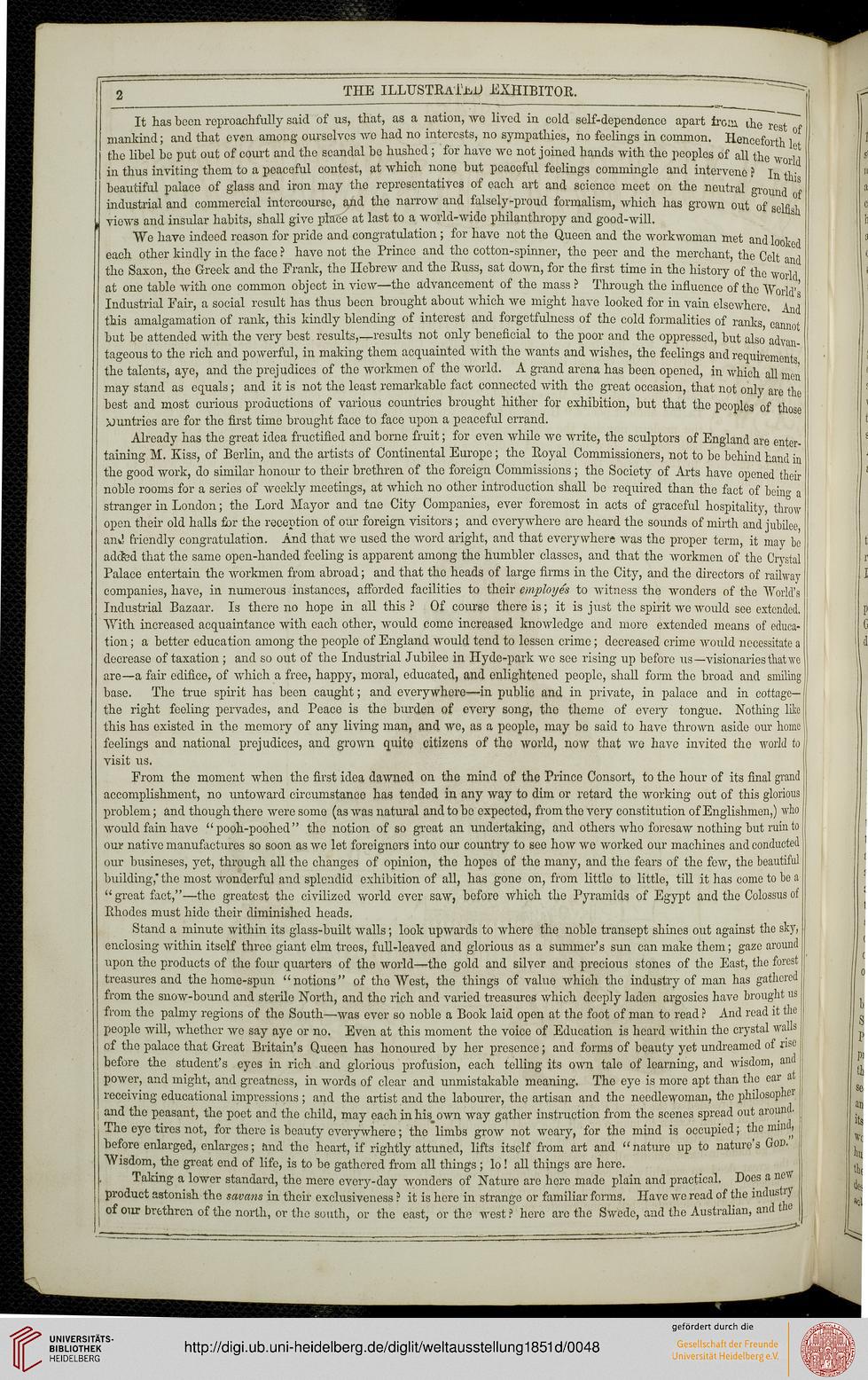 It has been reproachfully said of us, that, as a nation, wo lived in cold self-dependence apart from ihe re"t
mankind; and that even among ourselves wo had no interests, no sympathies, no feelings in common. Henceforth 1
the libel bo put out of court and the scandal be hushed; for have we not joined hands with the peoples of all the wcHl
in thus inviting them to a peaceful contest, at which none but peaceful feelings commingle and intervene ? Iu 1-
beautiful palace of glass and iron may the representatives of each art and science meet on the neutral ground H
industrial and commercial intercourse, and the narrow and falsely-proud formalism, which has grown out*of seliH
views and insular habits, shall give place at last to a world-wide philanthropy and good-will.

We have indeed reason for pride and congratulation; for have not the Queen and the workwoman met and look 1
each other kindly in the face ? have not the Prince and the cotton-spinner, the peer and the merchant, the Celt a°d
the Saxon, the Greek and the Frank, the Hebrew and the Russ, sat down, for the first time in the history of the worn
at one table with one common object in view—the advancement of the mass ? Through the influence of the World''
Industrial Fair, a social result has thus been brought about which we might have looked for in vain elsewhere. And
this amalgamation of rank, this kindly blending of interest and forgetfulncss of the cold formalities of ranks, canno'-
but be attended with the very best results,—results not only beneficial to the poor and the oppressed, but also advan-
tageous to the rich and powerful, in making them acquainted with the wants and wishes, the feelings and requirements
the talents, aye, and the prejudices of the workmen of the world. A grand arena has been opened, in which all me !
may stand as equals; and it is not the least remarkable fact connected with the great occasion, that not only are the
best and most curious productions of various countries brought hither for exhibition, but that the peoples of those
jjuntries are for the first time brought face to face upon a peaceful errand.

Already has the great idea fructified and borne fruit; for even while we write, the sculptors of England are enter-
taining M. Kiss, of Berlin, and the artists of Continental Europe; the Royal Commissioners, not to be behind hand in
the good work, do similar honour to their brethren of the foreign Commissions; the Society of Arts have opened their
noble rooms for a series of weekly meetings, at which no other introduction shall bo required than the fact of being a
stranger in London; the Lord Mayor and tne City Companies, ever foremost in acts of graceful hospitality, throw
open their old halls for the reception of our foreign visitors; and everywhere are heard the sounds of mirth and jubilee
ant! friendly congratulation. And that we used the word aright, and that everywhere was the proper term, it may be
adefed that the same open-handed feeling is apparent among the humbler classes, and that the workmen of the Crystal
Palace entertain the workmen from abroad; and that the heads of large firms in the City, and the directors of railway
companies, have, in numerous instances, afforded facilities to their employes to witness the wonders of the World's
Industrial Bazaar. Is there no hope in all this ? Of course there is; it is just the spirit we would see extended.
Y*rith increased acquaintance with each other, would come increased knowledge and more extended means of educa-
tion ; a better education among the people of England would tend to lessen crime; decreased crime would necessitate a
decrease of taxation ; and so out of the Industrial Jubilee in Hyde-park we see rising up before us—visionaries that we
are—a fair edifice, of which a free, happy, moral, educated, and enlightened people, shall form the broad and smiling
base. The true spirit has been caught; and everywhere—in public and in private, in palace and in cottagc-
the right feeling pervades, and Peace is the burden of every song, the theme of every tongue. Nothing like
this has existed in the memory of any living man, and we, as a people, may be said to have thrown aside our home
feelings and national prejudices, and grown quite citizens of tho world, now that we have invited the world to
visit us.

From the moment when the first idea dawned on the mind of the Prince Consort., to the hour of its final grand
accomplishment, no untoward circumstance has tended in any way to dim or retard the working out of this glorious
problem; and though there were some (as was natural and to be expected, from the very constitution of Englishmen,) who
would fain have "pooh-poohed" the notion of so groat an undertaking, and others who foresaw nothing but ruin to
our native manufactures so soon as we let foreigners into our country to see how we worked our machines and conducted
our busineses, yet, through all the changes of opinion, the hopes of the many, and the fears of the few, the beautiful
building,* the most wonderful and splendid exhibition of all, has gone on, from little to little, till it has come to be a
"great fact,"—the greatest the civilized world ever saw, before which the Pyramids of Egypt and the Colossus of
Rhodes must hide their diminished heads.

Stand a minute within its glass-built walls; look upwards to where the noble transept shines out against the sky,
enclosing within itself three giant elm trees, full-leaved and glorious as a summer's sun can make them; gaze around
upon the products of the four quarters of the world—the gold and silver and precious stones of the East, the forest
treasures and the home-spun "notions" of tho West, the things of value which tho industry of man has gathered
from the snow-bound and sterile North, and tho rich and varied treasures which deeply laden argosies have brought us
from the palmy regions of the South—was ever so noble a Book laid open at the foot of man to read ? And read it the
people will, whether we say aye or no. Even at this moment the voice of Education is heard within the crystal walls
of the palace that Great Britain's Queen has honoured by her presence; and forms of beauty yet undreamed of rise
before the student's eyes in rich and glorious profusion, each telling its own tale of learning, and wisdom, and
power, and might, and greatness, in words of clear and unmistakable meaning. The eye is more apt than tho ear at
receiving educational impressions ; and the artist and the labourer, the artisan and the needlewoman, the philosopher
and the peasant, the poet and the child, may each in his^ own way gather instruction from the scenes spread out around.
The eye tires not, for there is beauty everywhere; the limbs grow not weary, for the mind is occupied; the mind,
before enlarged, enlarges; and the heart, if rightly attuned, lifts itself from art and "nature up to nature's God.'
Wisdom, the great end of life, is to be gathered from all things ; lo! all things are here.

Taking a lower standard, the mere every-day wonders of Nature are here made plain and practical. Does a new
product astonish the savana in then- exclusiveness ? it is here in strange or familiar forms. Have we read of the industry
of our brethren of the north, or the south, or the east, or the west? here are the Swede, and the Australian, and the