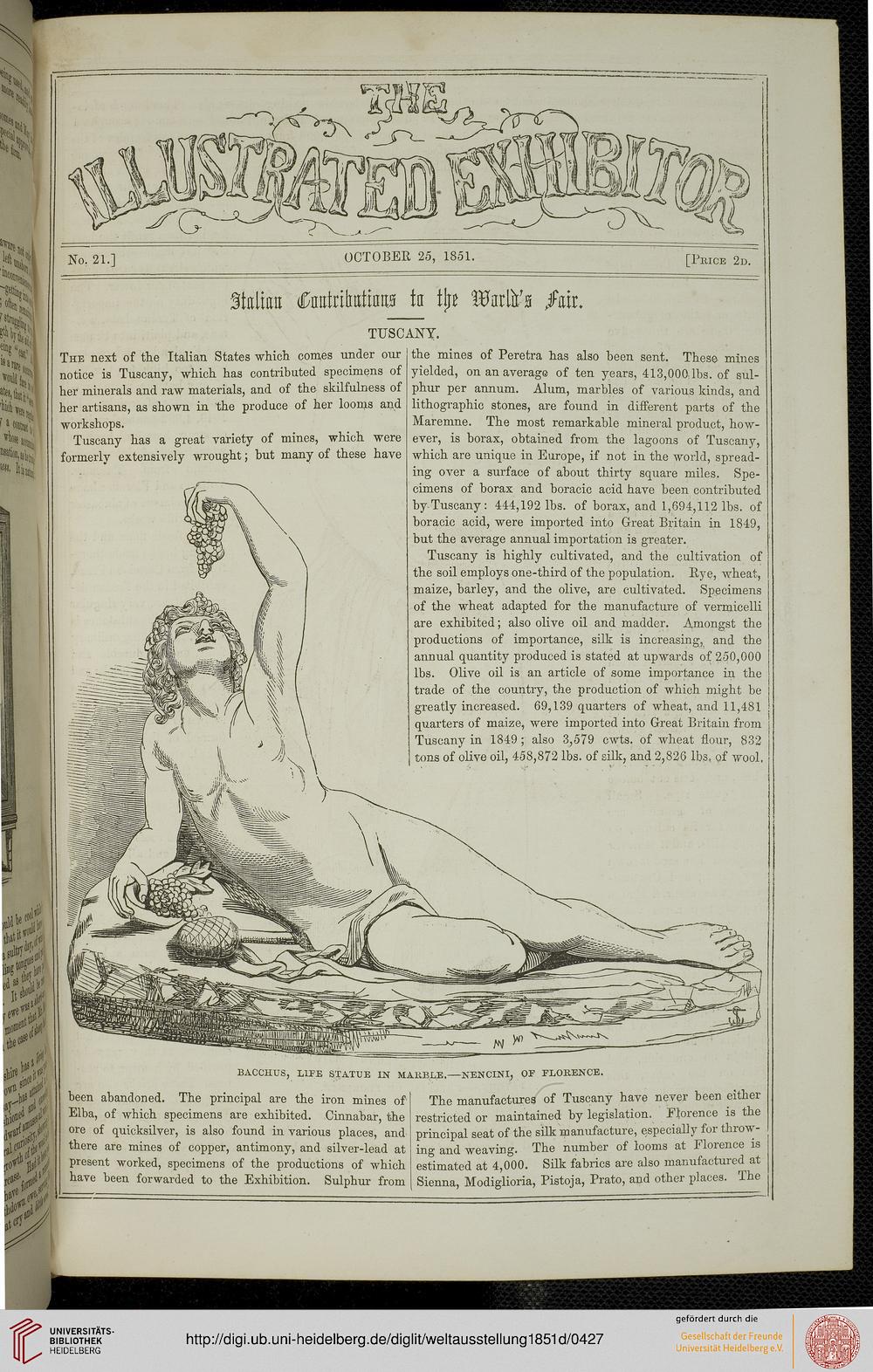 The next of the Italian States which comes under our
notice is Tuscany, which has contributed specimens of
her minerals and raw materials, and of the skilfulness of
her artisans, as shown in the produce of her looms and
workshops.

Tuscany has a great variety of mines, which were
formerly extensively wrought; but many of these have

the mines of Peretra has also been sent. These mines
yielded, on an average of ten years, 413,000 lbs. of sul-
phur per annum. Alum, marbles of various kinds, and
lithographic stones, are found in different parts of the
Maremne. The most remarkable mineral product, how-
ever, is borax, obtained from the lagoons of Tuscany,
which are unique in Europe, if not in the world, spread-
ing over a surface of about thirty square miles. Spe-
cimens of borax and boracic acid have been contributed
by-Tuscany: 444,192 lbs. of borax, and 1,694,112 lbs. of
boracic acid, were imported into Great Britain in 1849,
but the average annual importation is greater.

Tuscany is highly cultivated, and the cultivation of
the soil employs one-third of the population. Bye, wheat,
maize, barley, and the olive, are cultivated. Specimens
of the wheat adapted for the manufacture of vermicelli
are exhibited; also olive oil and madder. Amongst the
productions of importance, silk is increasing, and the
annual quantity produced is stated at upwards of 250,000
lbs. Olive oil is an article of some importance in the
trade of the country, the production of which might be
greatly increased. 69,139 quarters of wheat, and 11,481
quarters of maize, were imported into Great Britain from
Tuscany in 1849 ; also 3,579 cwts. of wheat flour, 832
tons of olive oil, 458,872 lbs. of silk, and 2,826 lbs, of wool.

been abandoned. The principal are the iron mines of
Elba, of which specimens are exhibited. Cinnabar, the
ore of quicksilver, is also found in various places, and
there are mines of copper, antimony, and silver-lead at
present worked, specimens of the productions of which
have been forwarded to the Exhibition. Sulphur from

The manufactures of Tuscany have never been either
restricted or maintained by legislation. Florence is the
principal seat of the silk manufacture, especially for throw-
ing and weaving. The number of looms at Florence is
estimated at 4,000. Silk fabrics are also manufactured at