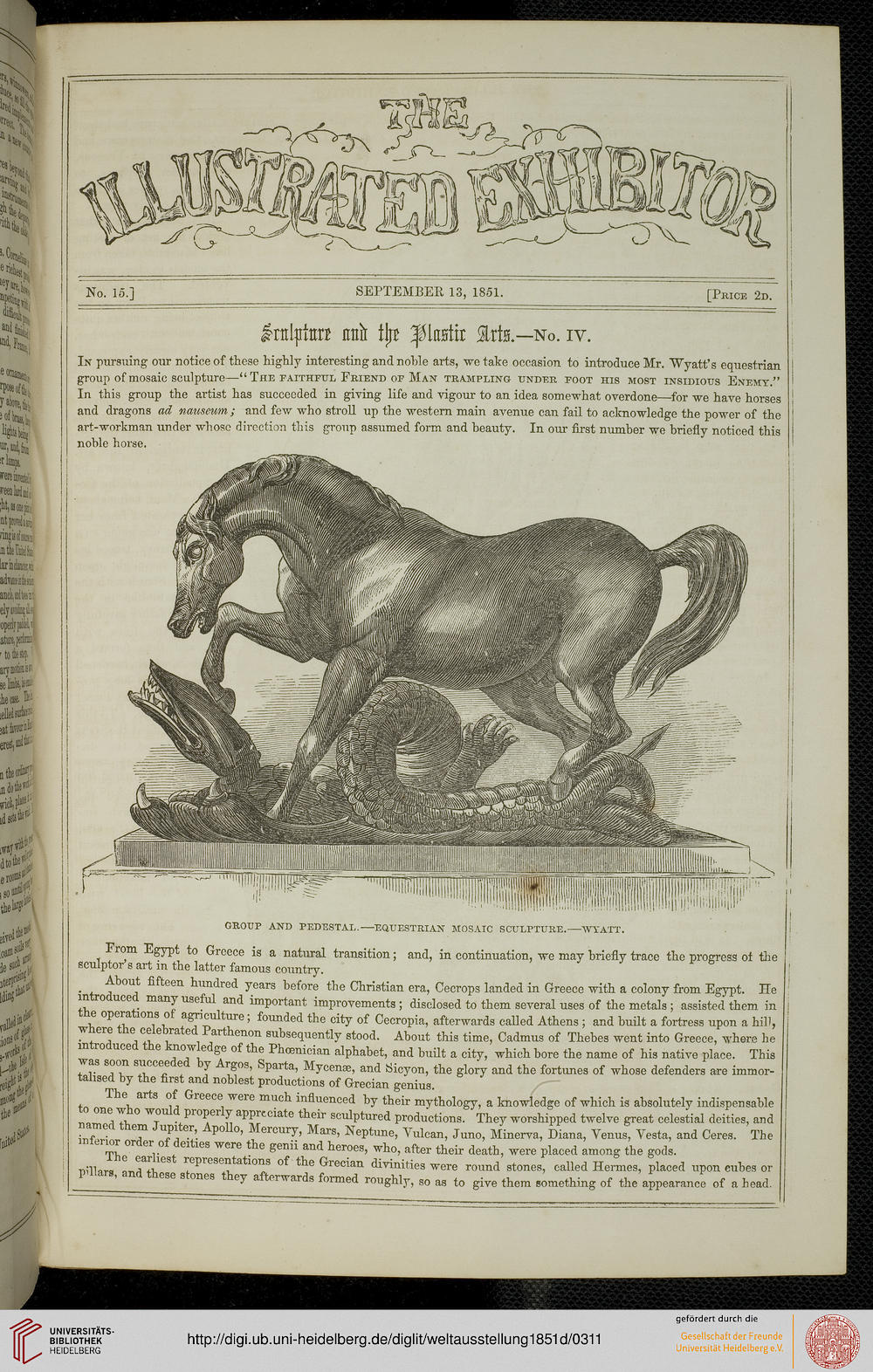 In pursuing our notice of these highly interesting and noble arts, we take occasion to introduce Mr. Wyatt's equestrian
group of mosaic sculpture—uThe faithful Friend of Man trampling under, foot his most insidious Enemy."
In this group the artist has succeeded in giving life and vigour to an idea somewhat overdone—for we have horses
and dragons ad nmcseum ; and few who stroll up the western main avenue can fail to acknowledge the power of the
art-workman under whose direction this group assumed form and beauty. In our first number we briefly noticed this
noble horse.

From Egypt to Greece is a natural transition; and, in continuation, we may briefly trace the progress ot the
sculptor s art m the latter famous country. I

' 1\h°UA fifteea hundred years before the Christian era, Cecrops landed in Greece with a colony from Egypt. He
introduced many useful and important improvements; disclosed to them several uses of the metals; assisted them in
the operations of agriculture; founded the city of Cecropia, afterwards called Athens ; and built a fortress upon a hill,
where the celebrated Parthenon subsequently stood. About this time, Cadmus of Thebes went into Greece, where he
introduced the knowledge of the Phoenician alphabet, and built a city, which bore the name of his native place. This
was soon succeeded by Argos, Sparta, Mycenae, and Sicyon, the glory and the fortunes of whose defenders are immor-
talised by the first and noblest productions of Grecian genius.

The arts of Greece were much influenced by their mythology, a knowledge of which is absolutely indispensable
ZTaZ° ^r ,W°l I appreciate their sculptured productions. They worshipped twelve great celestial deities, and
named them Jupiter, Apollo, Mercury, Mars, Neptune, Vulcan, Juno, Minerva, Diana, Venus, Vesta, and Ceres. The
inferior order of deities were the genii and heroes, who, after their death, were placed among the gods.
nilW* -?T ^presentations of the Grecian divinities were round stones, called Hermes, placed upon cubes or
P liars, and these stones they afterwards formed roughly, so as to give them something of the appearance of a head.