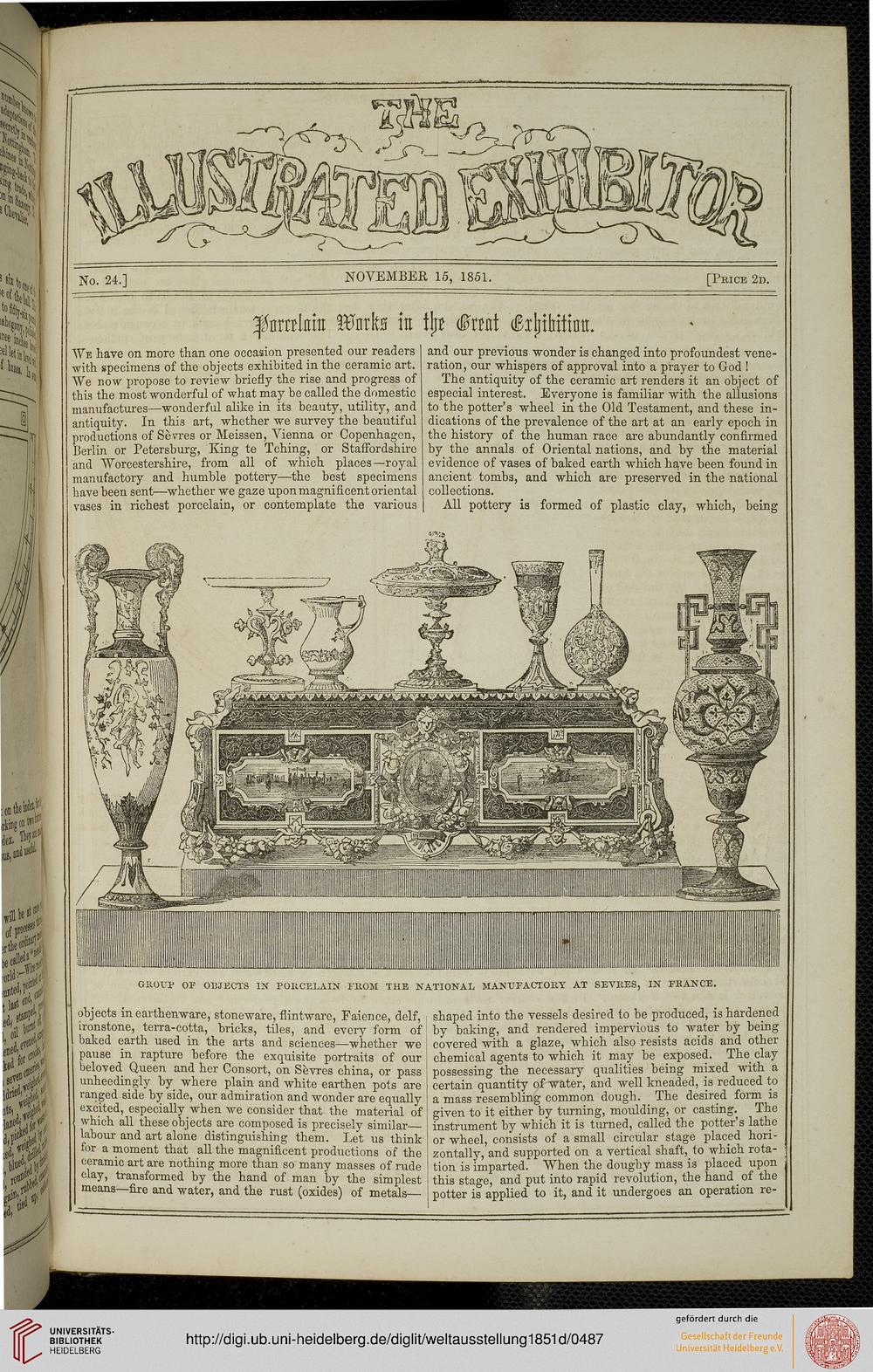 We have on more than one occasion presented our readers
with specimens of the objects exhibited in the ceramic art.
We now propose to review briefly the rise and progress of
this the most wonderful of what may be called the domestic
manufactures—wonderful alike in its beauty, utility, and
antiquity. In this art, whether we survey the beautiful
productions of Sevres or Meissen, Vienna or Copenhagen,
Berlin or Petersburg, King te Tching, or Staffordshire
and Worcestershire, from all of which places—royal
manufactory and humble pottery—the best specimens
have been sent—whether we gaze upon magnificent oriental
vases in richest porcelain, or contemplate the various

and our previous wonder is changed into profoundest vene-
ration, our whispers of approval into a prayer to God !

The antiquity of the ceramic art renders it an object of
especial interest. Everyone is familiar with the allusions
to the potter's wheel in the Old Testament, and these in-
dications of the prevalence of the art at an early epoch in
the history of the human race are abundantly confirmed
by the annals of Oriental nations, and by the material
evidence of vases of baked earth which have been found in
ancient tombs, and which are preserved in the national
collections.

All pottery is formed of plastic clay, which, being

GROUP OF OBJECTS IK PORCELAIN FROM THE NATIONAL MANUFACTORY AT SEVRES, IN FRANCE.

objects in earthenware, stoneware, flint-ware, Faience, delf,
ironstone, terra-cotta, bricks, tiles, and every form of
baked earth used in the arts and sciences—whether we
pause in rapture before the exquisite portraits of our
beloved Queen and her Consort, on Sevres china, or pass
unheedingly by where plain and white earthen pots are
ranged side by side, our admiration and wonder are equally
excited, especially when we consider that the material of

which all these objects are composed is precisely similar__

labour and art alone distinguishing them. Let us think
for a moment that all the magnificent productions of the
ceramic art are nothing more than so many masses of rude
clay, transformed by the hand of man by the simplest
means—fire and water, and the rust (oxides) of metals—

shaped into the vessels desired to be produced, is hardened
by baking, and rendered impervious to water by being
covered with a glaze, which also resists acids and other
chemical agents to which it may be exposed. The clay
possessing the necessary qualities being mixed with a
certain, quantity of water, and well kneaded, is reduced to
a mass resembling common dough. The desired form is
given to it either by turning, moulding, or casting. The
instrument by which it is turned, called the potter's lathe
or wheel, consists of a small circular stage placed hori-
zontally, and supported on a vertical shaft, to which rota-
tion is imparted. When the doughy mass is placed upon
this stage, and put into rapid revolution, the hand _ of the
potter is applied to it, and it undergoes an operation re-