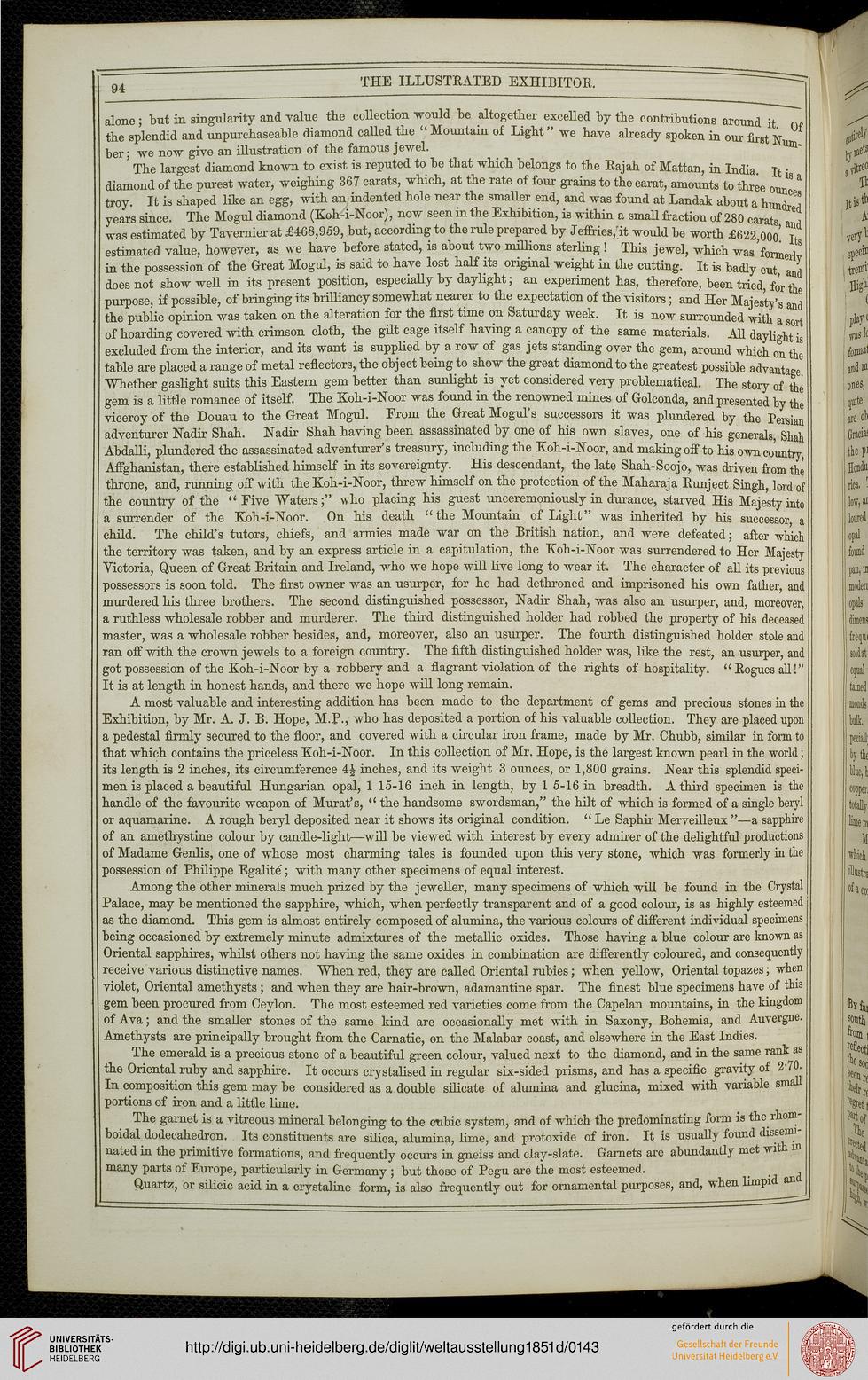 alone ; but in singularity and value the collection would be altogether excelled by the contributions around it
the splendid and unpurchaseable diamond called the " Mountain of Light" we have already spoken in our first N
ber; we now give an illustration of the famous jewel. Un^

' The largest diamond known to exist is reputed to be that which belongs to the Rajah of Mattan, in India. It •
diamond of the purest water, weighing 367 carats, which, at the rate of four grains to the carat, amounts to three om *
troy. It is shaped like an egg, with an indented hole near the smaller end, and was found at Landak about a hundTi
years since. The Mogul diamond (Koh-i-Noor), now seen in the Exhibition, is within a small fraction of 280 carats a
was estimated by Tavernier at £468,959, but, according to the rule prepared by Jeffries/it would be worth £622,00o' T
estimated value, however, as we have before stated, is about two millions sterling! This jewel, which was'former!
in the possession of the Great Mogul, is said to have lost half its original weight in the cutting. It is badly cut and
does not show well in its present position, especially by daylight; an experiment has, therefore, been tried, for th
purpose, if possible, of bringing its brilliancy somewhat nearer to the expectation of the visitors; and Her Majesty's and
the public opinion was taken on the alteration for the first time on Saturday week. It is now surrounded with a sort
of hoarding covered with crimson cloth, the gilt cage itself having a canopy of the same materials. All daylight is
excluded from the interior, and its want is supplied by a row of gas jets standing over the gem, around which on the
table are placed a range of metal reflectors, the object being to show the great diamond to the greatest possible advantage6
Whether gaslight suits this Eastern gem better than sunlight is yet considered very problematical. The story of the
gem is a little romance of itself. The Koh-i-Noor was found in the renowned mines of Golconda, and presented by the
viceroy of the Douau to the Great Mogul. From the Great Mogul's successors it was plundered by the Persian
adventurer Nadir Shah. Nadir Shah having been assassinated by one of his own slaves, one of his generals, Shah
Abdalli, plundered the assassinated adventurer's treasury, including the Koh-i-Noor, and making off to his own country
Affghanistan, there established himself in its sovereignty. His descendant, the late Shah-Soojo, was driven from the
throne, and, running off with the Koh-i-Noor, threw himself on the protection of the Maharaja Runjeet Singh, lord of
the country of the " Five Waters;" who placing his guest unceremoniously in durance, starved His Majesty into
a surrender of the Koh-i-Noor. On his death "the Mountain of Light" was inherited by his successor a
child. The child's tutors, chiefs, and armies made war on the British nation, and were defeated; after which
the territory was taken, and by an express article in a capitulation, the Koh-i-Noor was surrendered to Her Majesty
Victoria, Queen of Great Britain and Ireland, who we hope will live long to wear it. The character of all its previous
possessors is soon told. The first owner was an usurper, for he had dethroned and imprisoned his own father, and
murdered his three brothers. The second distinguished possessor, Nadir Shah, was also an usurper, and, moreover
a ruthless wholesale robber and murderer. The third distinguished holder had robbed the property of his deceased
master, was a wholesale robber besides, and, moreover, also an usurper. The fourth distinguished holder stole and
ran off with the crown jewels to a foreign country. The fifth distinguished holder was, like the rest, an usurper, and
got possession of the Koh-i-Noor by a robbery and a flagrant violation of the rights of hospitality. " Rogues all!"
It is at length in honest hands, and there we hope will long remain.

A most valuable and interesting addition has been made to the department of gems and precious stones in the
Exhibition, by Mr. A. J. B. Hope, M.P., who has deposited a portion of his valuable collection. They are placed upon
a pedestal firmly secured to the floor, and covered with a circular iron frame, made by Mr. Chubb, similar in form to
that which contains the priceless Koh-i-Noor. In this collection of Mr. Hope, is the largest known pearl in the world;
its length is 2 inches, its circumference 4^ inches, and its weight 3 ounces, or 1,800 grains. Near this splendid speci-
men is placed a beautiful Hungarian opal, 1 15-16 inch in length, by 1 5-16 in breadth. A third specimen is the
handle of the favourite weapon of Murat's, " the handsome swordsman," the hilt of which is formed of a single beryl
or aquamarine. A rough beryl deposited near it shows its original condition. " Le Saphir Merveilleux "—a sapphire
of an amethystine colour by candle-light—will be viewed with interest by every admirer of the delightful productions
of Madame Genlis, one of whose most charming tales is founded upon this very stone, which was formerly in the
possession of Philippe Egalite ; with many other specimens of equal interest.

Among the other minerals much prized by the jeweller, many specimens of which will be found in the Crystal
Palace, may be mentioned the sapphire, which, when perfectly transparent and of a good colour, is as highly esteemed
as the diamond. This gem is almost entirely composed of alumina, the various colours of different individual specimens
being occasioned by extremely minute admixtures of the metallic oxides. Those having a blue colour are known as
Oriental sapphires, whilst others not having the same oxides in combination are differently coloured, and consequently
receive various distinctive names. When red, they are called Oriental rubies; when yellow, Oriental topazes; when
violet, Oriental amethysts ; and when they are hair-brown, adamantine spar. The finest blue specimens have of this
gem been procured from Ceylon. The most esteemed red varieties come from the Capelan mountains, in the kingdom
of Ava; and the smaller stones of the same kind are occasionally met with in Saxony, Bohemia, and Auvergne.
Amethysts are principally brought from the Carnatic, on the Malabar coast, and elsewhere in the East Indies.

The emerald is a precious stone of a beautiful green colour, valued next to the diamond, and in the same rank as
the Oriental ruby and sapphire. It occurs crystalised in regular six-sided prisms, and has a specific gravity of 2*70.
In composition this gem may be considered as a double silicate of alumina and glucina, mixed with variable small
portions of iron and a little lime.

The garnet is a vitreous mineral belonging to the cubic system, and of which the predominating form is the rhom-
boidal dodecahedron. Its constituents are silica, alumina, lime, and protoxide of iron. It is usually found dissemi-
nated in the primitive formations, and frequently occurs in gneiss and clay-slate. Garnets are abundantly met with in
many parts of Europe, particularly in Germany ; but those of Pegu are the most esteemed. < <

Quartz, or silicic acid in a crystaline form, is also frequently cut for ornamental purposes, and, when limpid an