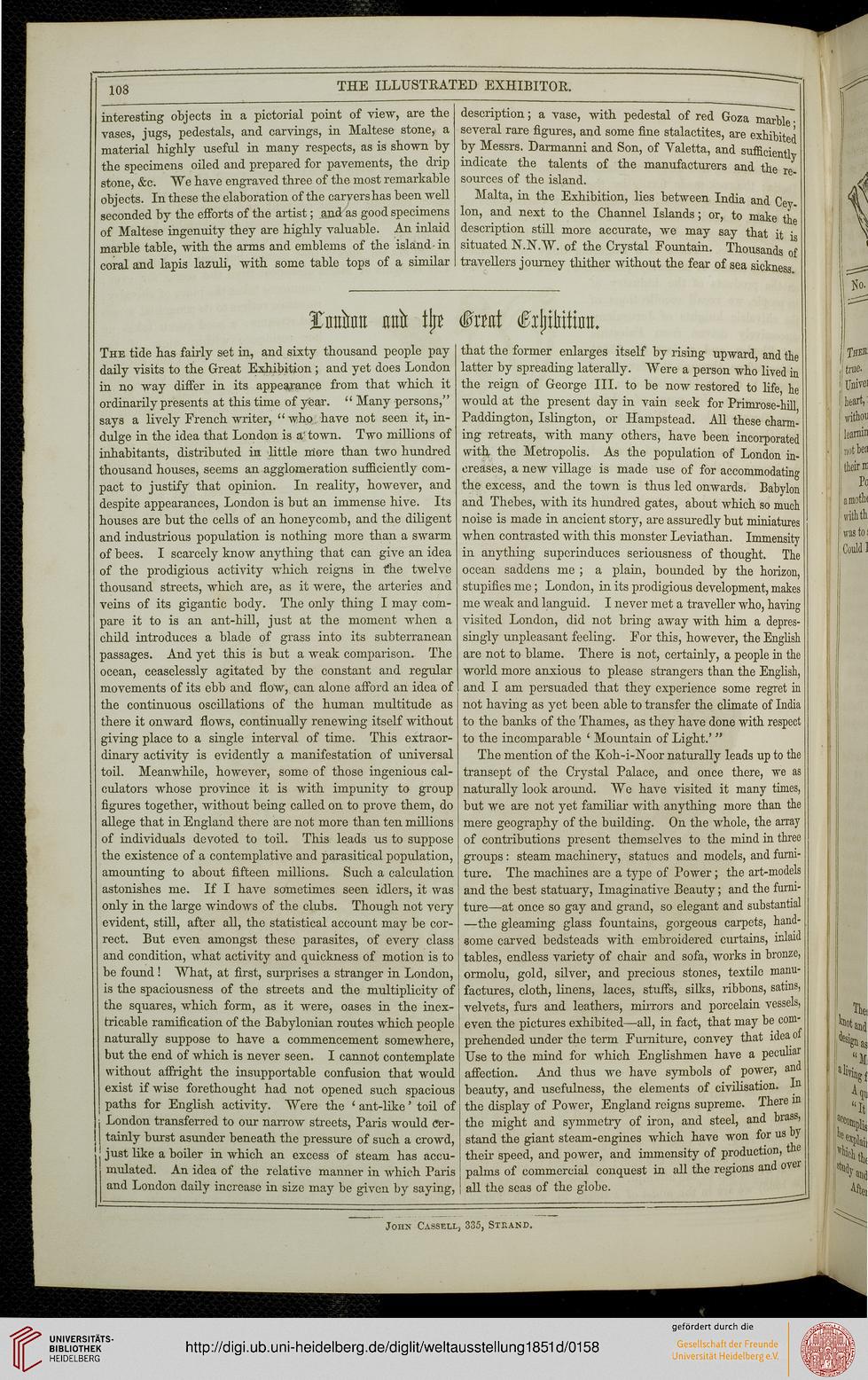 interesting objects in a pictorial point of view, are the
vases, jugs, pedestals, and carvings, in Maltese stone, a
material highly useful in many respects, as is shown by
the specimens oiled and prepared for pavements, the drip
stone, &c. We have engraved three of the most remarkable
objects. In these the elaboration of the carvers has been well
seconded by the efforts of the artist; and as good specimens
of Maltese ingenuity they are highly valuable. An inlaid
marble table, with the arms and emblems of the island-in
coral and lapis lazuli, with some table tops of a similar

description; a vase, with pedestal of red Goza marble •
several rare figures, and some fine stalactites, are exhibited
by Messrs. Darmanni and Son, of Valetta, and sufficient!
indicate the talents of the manufacturers and the re
sources of the island.

Malta, in the Exhibition, lies between India and Cev
Ion, and next to the Channel Islands; or, to make th
description still more accurate, we may say that it '
situated N.N/W. of the Crystal Fountain. Thousands of
travellers journey thither without the fear of sea sickness

The tide has fairly set in, and sixty thousand people pay
daily visits to the Great Exhibition; and yet does London
in no way differ in its appearance from that which it
ordinarily presents at this time of year. " Many persons,"
says a lively French writer, "who have not seen it, in-
dulge in the idea that London is a'town. Two millions of
inhabitants, distributed in little nlore than two hundred
thousand houses, seems an agglomeration sufficiently com-
pact to justify that opinion. In reality, however, and
despite appearances, London is but an immense hive. Its
houses are but the cells of an honeycomb, and the diligent
and industrious population is nothing more than a swarm
of bees. I scarcely know anything that can give an idea
of the prodigious activity which reigns in the twelve
thousand streets, which are, as it were, the arteries and
veins of its gigantic body. The only thing I may com-
pare it to is an ant-hill, just at the moment when a
child introduces a blade of grass into its subterranean
passages. And yet this is but a weak comparison. The
ocean, ceaselessly agitated by the constant and regular
movements of its ebb and flow, can alone afford an idea of
the continuous oscillations of the human multitude as
there it onward flows, continually renewing itself without
giving place to a single interval of time. This extraor-
dinary activity is evidently a manifestation of universal
toil. Meanwhile, however, some of those ingenious cal-
culators whose province it is with impunity to group
figures together, without being called on to prove them, do
allege that in England there are not more than ten millions
of individuals devoted to toil. This leads us to suppose
the existence of a contemplative and parasitical population,
amounting to about fifteen millions. Such a calculation
astonishes me. If I have sometimes seen idlers, it was
only in the large windows of the clubs. Though not very
evident, still, after all, the statistical account may be cor-
rect. But even amongst these parasites, of every class
and condition, what activity and quickness of motion is to
be found! "What, at first, surprises a stranger in London,
is the spaciousness of the streets and the multiplicity of
the squares, which form, as it were, oases in the inex-
tricable ramification of the Babylonian routes which people
naturally suppose to have a commencement somewhere,
but the end of which is never seen. I cannot contemplate
without affright the insupportable confusion that would
exist if wise forethought had not opened such spacious
paths for English activity. "Were the < ant-like' toil of
London transferred to our narrow streets, Paris would Cer-
tainly burst asunder beneath the pressure of such a crowd,
just like a boiler in which an excess of steam has accu-
mulated. An idea of the relative manner in which Paris
and London daily increase in size may be given by saying,

that the former enlarges itself by rising upward, and the
latter by spreading laterally. "Were a person who lived in
the reign of George III. to be now restored to life, be
would at the present day in vain seek for Primrose-bill
Paddington, Islington, or Hampstead. All these charm-
ing retreats, with many others, have been incorporated
with, the Metropolis. As the population of London in-
creases, a new village is made use of for accommodating
the excess, and the town is thus led onwards. Babylon
and Thebes, with its hundred gates, about which so much
noise is made in ancient story, are assuredly but miniatures
when contrasted with this monster Leviathan. Immensity
in anything superinduces seriousness of thought. The
ocean saddens me ; a plain, bounded by the horizon,
stupifies me; London, in its prodigious development, makes
me weak and languid. I never met a traveller who, baving
visited London, did not bring away with him a depres-
singly unpleasant feeling. For this, however, the English
are not to blame. There is not, certainly, a people in tbe
world more anxious to please strangers tban the English,
and I am persuaded that they experience some regret in
not having as yet been able to transfer the climate of India
to the banks of the Thames, as they have done with respect
to the incomparable ' Mountain of Light.' "

The mention of the Koh-i-lSoor naturally leads up to the
transept of the Crystal Palace, and once there, we as
naturally look around. "We have visited it many times,
but we are not yet familiar with anything more tban the
mere geography of the building. On the whole, tbe array
of contributions present themselves to the mind in three
groups : steam machinery, statues and models, and furni-
ture. The machines are a type of Power; the art-models
and the best statuary, Imaginative Beauty; and the furni-
ture—at once so gay and grand, so elegant and substantial
—the gleaming glass fountains, gorgeous carpets, hand-
some carved bedsteads with embroidered curtains, inlaid
tables, endless variety of chair and sofa, works in bronze,
ormolu, gold, silver, and precious stones, textile manu-
factures, cloth, linens, laces, stuffs, silks, ribbons, satins,
velvets, furs and leathers, mirrors and porcelain vessels,
even the pictures exhibited—all, in fact, that may be com-
prehended under the term Furniture, convey that idea oi
Use to the mind for which Englishmen have a peculiar
affection. And thus we have symbols of power, and
beauty, and usefulness, the elements of civilisation. ln
the display of Power, England reigns supreme. There m
the might and symmetry of iron, and steel, and brass,
stand the giant steam-engines which have won for us by
their speed, and power, and immensity of production, the
palms of commercial conquest in all the regions and ovei
all the seas of the globe.