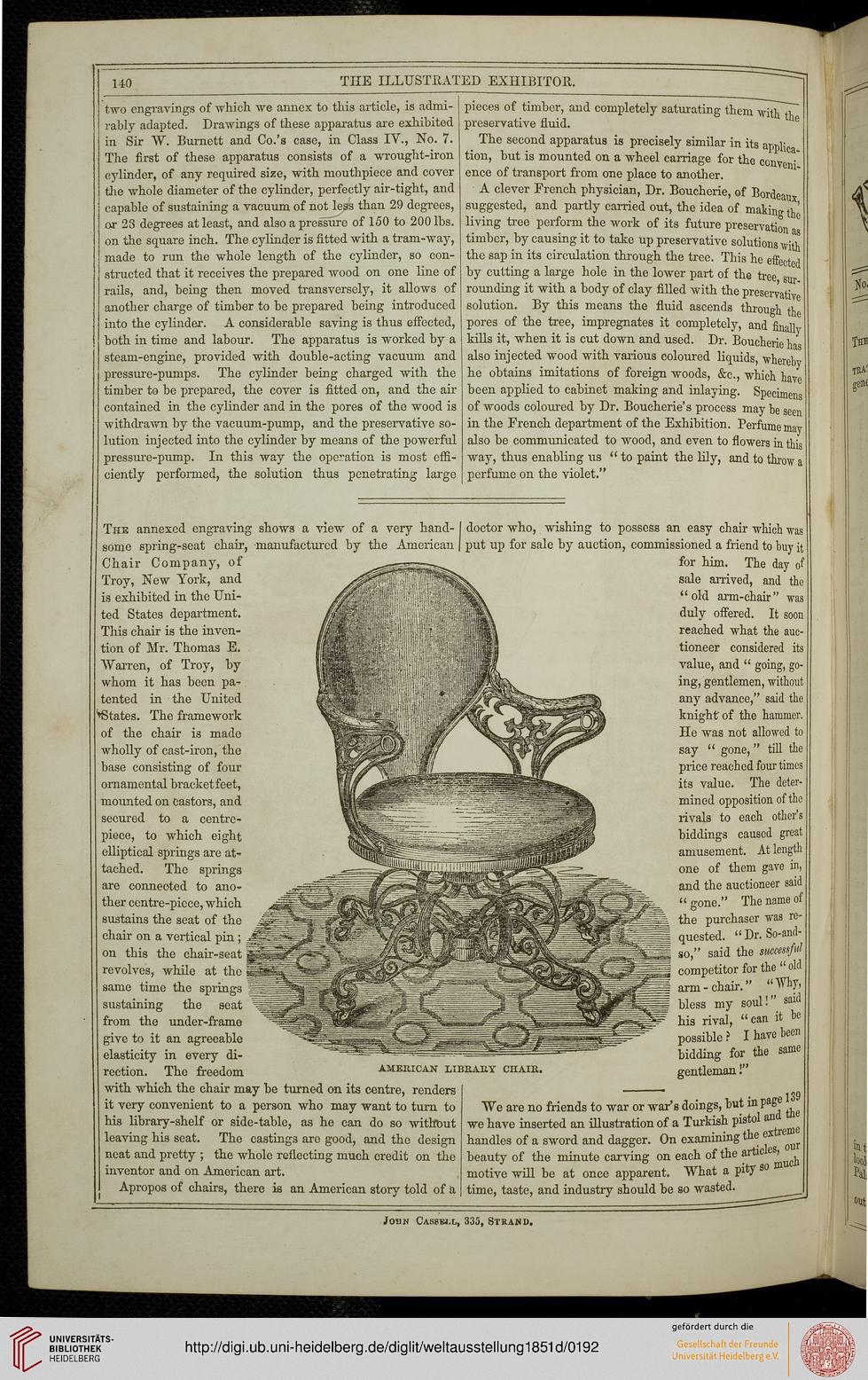 two engravings of which we annex to this article, is admi-
rably adapted. Drawings of these apparatus are exhibited
in Sir W. Burnett and Co.'s case, in Class IV., No. 7.
The first of these apparatus consists of a wrought-iron
cylinder, of any required size, with mouthpiece and cover
the whole diameter of the cylinder, perfectly air-tight, and
capable of sustaining a vacuum of not less than 29 degrees,
or 23 degrees at least, and also a pressure of 150 to 200 lbs.
on the square inch. The cylinder is fitted with a tram-way,
made to run the whole length of the cylinder, so con-
structed that it receives the prepared wood on one line of
rails, and, being then moved transversely, it allows of
another charge of timber to be prepared being introduced
into the cylinder. A considerable saving is thus effected,
both in time and labour. The apparatus is worked by a
steam-engine, provided with double-acting vacuum and
pressure-pumps. The cylinder being charged with the
timber to be prepared, the cover is fitted on, and the air
contained in the cylinder and in the pores of the wood is
withdrawn by the vacuum-pump, and the preservative so-
lution injected into the cylinder by means of the powerful
pressure-pump. In this way the operation is most effi-
ciently performed, the solution thus penetrating large

pieces of timber, and completely saturating them with th
preservative fluid.

The second apparatus is precisely similar in its appli
tion, but is mounted on a wheel carriage for the ccnvc '"
ence of transport from one place to another.

A clever French physician, Dr. Boucherie, of Bordeaux
suggested, and partly carried out, the idea of matin* £
living tree perform the work of its future preservation a°
timber, by causing it to take up preservative solutions with
the sap in its circulation through the tree. This he effect d
by cutting a large hole in the lower part of the tree sur-
rounding it with a body of clay filled with the preservativ"
solution. By this means the fluid ascends through th
pores of the tree, impregnates it completely, and finally
kills it, when it is cut down and used. Dr. Boucherie ha
also injected wood with various coloured liquids, whereby
he obtains imitations of foreign woods, &c, which haye
been applied to cabinet making and inlaying. Specimens
of woods coloured by Dr. Boucherie's process may he seen
in the French department of the Exhibition. Perfume may
also be communicated to wood, and even to flowers in this
way, thus enabling us " to paint the lily, and to throw a
perfume on the violet."

The annexed engraving shows a view of a very hand-
some spring-seat chair, manufactured by the American
Chair Company, of
Troy, New York, and
is exhibited in the Uni-
ted States department.
This chair is the inven-
tion of Mr. Thomas E.
Warren, of Troy, by
whom it has been pa-
tented in the United
'♦States. The framework
of the chair is made
wholly of cast-iron, the
base consisting of four
ornamental bracketfeet,
mounted on castors, and
secured to a centre-
piece, to which eight
elliptical springs are at-
tached. The springs
are connected to ano-
ther centre-piece, which
sustains the seat of the
chair on a vertical pin;
on this the chair-seat
revolves, while at the
same time the springs
sustaining the seat
from the under-frame
give to it an agreeable
elasticity in every di-
rection. The freedom

with which the chair may be turned on its centre, renders
it very convenient to a person who may want to turn to
his library-shelf or side-table, as he can do so without
leaving his seat. The castings are good, and the design
neat and pretty ; the whole reflecting much credit on the
inventor and on American art.

Apropos of chairs, there k an American story told of a

doctor who, wishing to possess an easy chair which was
put up for sale by auction, commissioned a friend to buy it

for him. The day of
sale arrived, and the
"old arm-chair" was
duly offered. It soon
reached what the auc-
tioneer considered its
value, and " going, go-
ing, gentlemen, without
any advance," said the
knight of the hammer.
He was not allowed to
say " gone," till the
price reached four times
its value. The deter-
mined opposition of the
rivals to each other's
biddings caused great
amusement. At length
one of them gave in,
and the auctioneer said
" gone." The name of
the purchaser was re-
quested. "Dr. So-and-
so," said the successful
competitor for the "old

arm-chair." "Why,
bless my soul!" said
his rival, "can it be
possible? I have been
bidding for the same
gentleman!"

We are no friends to war or war's doings, but in page
we have inserted an illustration of a Turkish pistol and
handles of a sword and dagger. On examining the ex e^
beauty of the minute carving on each of the articles, ^
motive will be at once apparent. What a pitys0
time, taste, and industry should be so wasted.