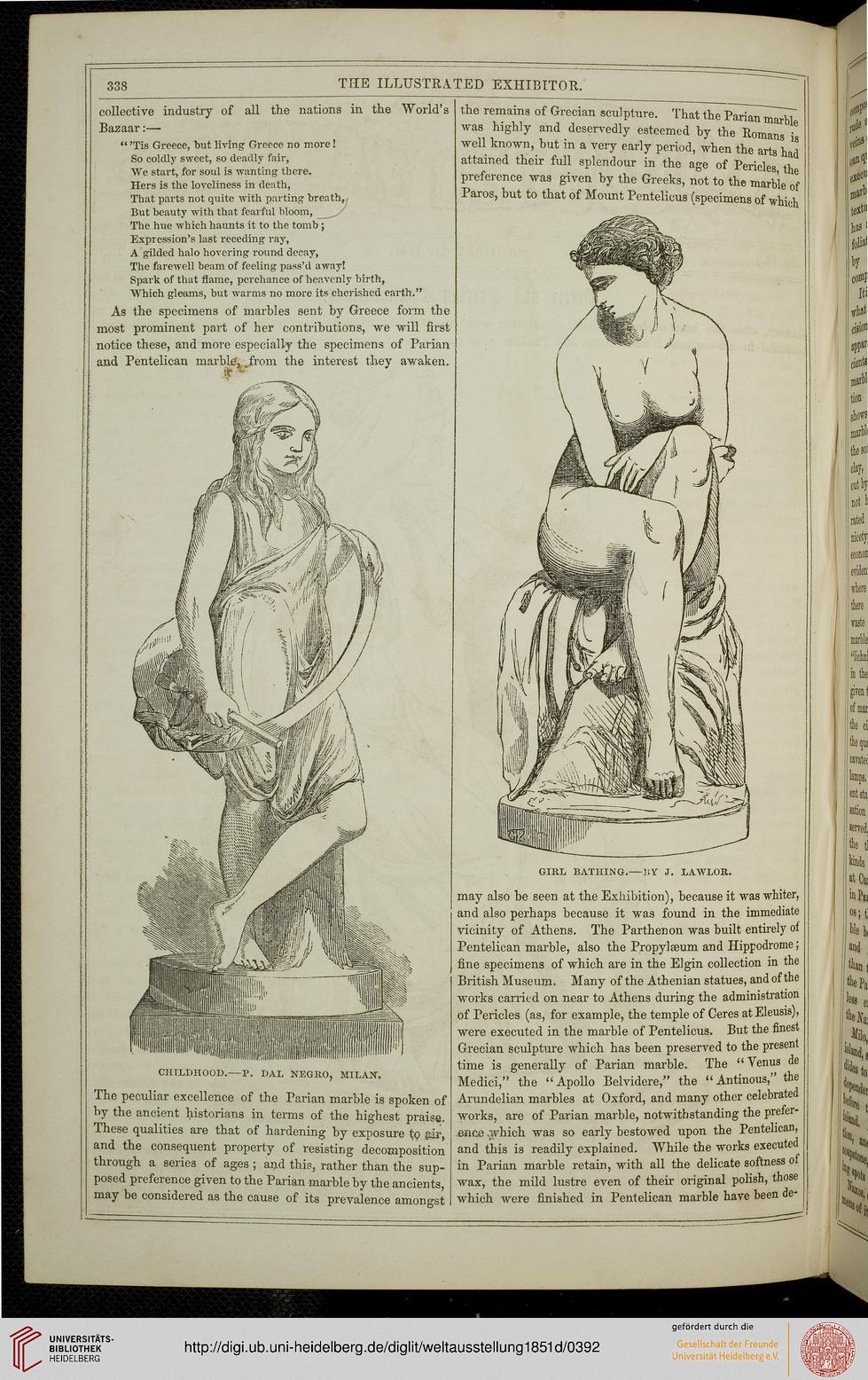 collective industry of all the nations in the World's
Bazaar:—

So coldly sweet, so deadly fair,

We start, for soul is wanting there.

Hers is the loveliness in death,

That parts not quite with parting breathy

But beauty with that fearful bloom, ____/

The hue which haunts it to the tomb;

A gilded halo hovering round decay,

The farewell beam of feeling pass'd away!

Spark of that flame, perchance of heavenly birth,

"Which gleams, but warms no more its cherished earth."

As the specimens of marbles sent by Greece form tbe
most prominent part of her contributions, we will first
notice these, and more especially the specimens of Parian
and Pentelican marble1, ,from the interest they awaken.

The peculiar excellence of the Parian marble is spoken of
by the ancient historians in terms of the highest praise.
These qualities are that of hardening by exposure to adr,
and the consequent property of resisting decomposition
through a series of ages ; and this, rather than the sup-
posed preference given to the Parian marble by the ancients,
may be considered as the cause of its prevalence amongst

the remains of Grecian sculpture. That the P^kn^hT
was highly and deservedly esteemed by the Romans
well known, but in a very early period, when the arts bad
attained their full splendour in the age of Pericles th
preference was given by the Greeks, not to the marble of
Paros, but to that of Mount Pentelicus (specimens of which

may also be seen at the Exhibition), because it was whiter,
and also perhaps because it was found in the immediate
vicinity of Athens. The Parthenon was built entirely of
Pentelican marble, also the Propylaeum and Hippodrome;
fine specimens of which are in the Elgin collection in the
British Museum. Many of the Athenian statues, and of the
works carried on near to Athens during the administration
of Pericles (as, for example, the temple of Ceres atEleusis),
were executed in the marble of Pentelicus. But the finest
Grecian sculpture which has been preserved to the present
time is generally of Parian marble. The "Venus de
Medici," the "Apollo Belvidere," the "Antinous," the
Arundelian marbles at Oxford, and many other celebrated
works, are of Parian marble, notwithstanding the prefer-
.ence .which was so early bestowed upon the Pentelican,
and this is readily explained. While the works executed
in Parian marble retain, with all the delicate softness of
wax, the mild lustre even of their original polish, those
which were finished in Pentelican marble have been de-