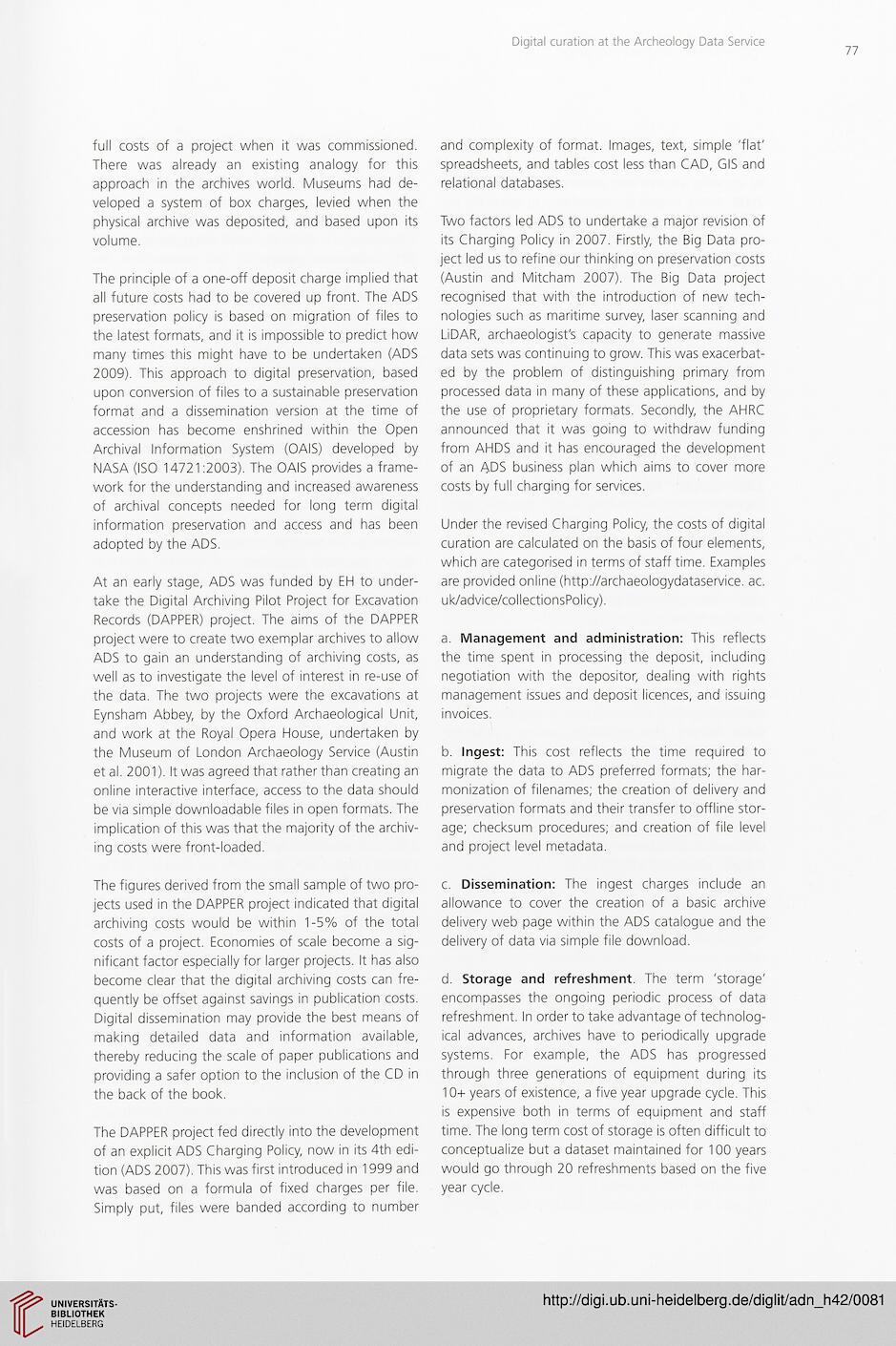 full costs of a project when it was commissioned.
There was already an existing analogy for this
approach in the archives world. Museums had de-
veloped a System of box charges, levied when the
physical archive was deposited, and based upon its
volume.
The principle of a one-off deposit Charge implied that
all future costs had to be covered up front. The ADS
preservation policy is based on migration of flies to
the latest formats, and it is impossible to predict how
many times this might have to be undertaken (ADS
2009). This approach to digital preservation, based
upon conversion of files to a sustainable preservation
format and a dissemination version at the time of
accession has become enshrined within the Open
Archival Information System (OAIS) developed by
NASA (ISO 14721:2003). The OAIS provides a frame-
work for the understanding and increased awareness
of archival concepts needed for long term digital
Information preservation and access and has been
adopted by the ADS.
At an early stage, ADS was funded by EH to under-
take the Digital Archiving Pilot Project for Excavation
Records (DAPPER) project. The aims of the DAPPER
project were to create two exemplar archives to allow
ADS to gain an understanding of archiving costs, as
well as to investigate the level of interest in re-use of
the data. The two projects were the excavations at
Eynsham Abbey, by the Oxford Archaeological Unit,
and work at the Royal Opera House, undertaken by
the Museum of London Archaeology Service (Austin
et al. 2001). Itwasagreed that ratherthan creating an
online Interactive interface, access to the data should
be via simple downloadable files in open formats. The
implication of this was that the majority of the archiv-
ing costs were front-loaded.
The figures derived from the small sample of two pro-
jects used in the DAPPER project indicated that digital
archiving costs would be within 1-5% of the total
costs of a project. Economies of scale become a sig-
nificant factor especially for larger projects. It has also
become clear that the digital archiving costs can fre-
quently be offset against savings in publication costs.
Digital dissemination may provide the best means of
making detailed data and information available,
thereby reducing the scale of paper publications and
providing a safer Option to the inclusion of the CD in
the back of the book.
The DAPPER project fed directly into the development
of an explicit ADS Charging Policy, now in its 4th edi-
tion (ADS 2007). This was first introduced in 1999 and
was based on a formula of fixed charges per file.
Simply put, files were banded according to number

and complexity of format. Images, text, simple 'flat'
spreadsheets, and tables cost less than CAD, GIS and
relational databases.
Two factors led ADS to undertake a major revision of
its Charging Policy in 2007. Firstly, the Big Data pro-
ject led us to refine our thinking on preservation costs
(Austin and Mitcham 2007). The Big Data project
recognised that with the introduction of new tech-
nologies such as maritime survey, laser scanning and
LiDAR, archaeologist's capacity to generate massive
data sets was continuing to grow. This was exacerbat-
ed by the problem of distinguishing primary from
processed data in many of these applications, and by
the use of proprietary formats. Secondly, the AHRC
announced that it was going to withdraw funding
from AHDS and it has encouraged the development
of an ADS business plan which aims to cover more
costs by full charging for Services.
Under the revised Charging Policy, the costs of digital
curation are calculated on the basis of four elements,
which are categorised in terms of staff time. Examples
are provided online (http://archaeologydataservice. ac.
uk/advice/collectionsPolicy).
a. Management and administration: This reflects
the time spent in processing the deposit, including
negotiation with the depositor, dealing with rights
management issues and deposit licences, and issuing
invoices.
b. Ingest: This cost reflects the time required to
migrate the data to ADS preferred formats; the har-
monization of filenames; the creation of delivery and
preservation formats and their transfer to offline stor-
age; checksum procedures; and creation of file level
and project level metadata.
c. Dissemination: The ingest charges include an
allowance to cover the creation of a basic archive
delivery web page within the ADS catalogue and the
delivery of data via simple file download.
d. Storage and refreshment. The term 'storage'
encompasses the ongoing periodic process of data
refreshment. In order to take advantage of technolog-
ical advances, archives have to periodically upgrade
Systems. For example, the ADS has progressed
through three generations of equipment during its
10+ years of existence, a five year upgrade cycle. This
is expensive both in terms of equipment and staff
time. The long term cost of storage is often difficult to
conceptualize but a dataset maintained for 100 years
would go through 20 refreshments based on the five
year cycle.