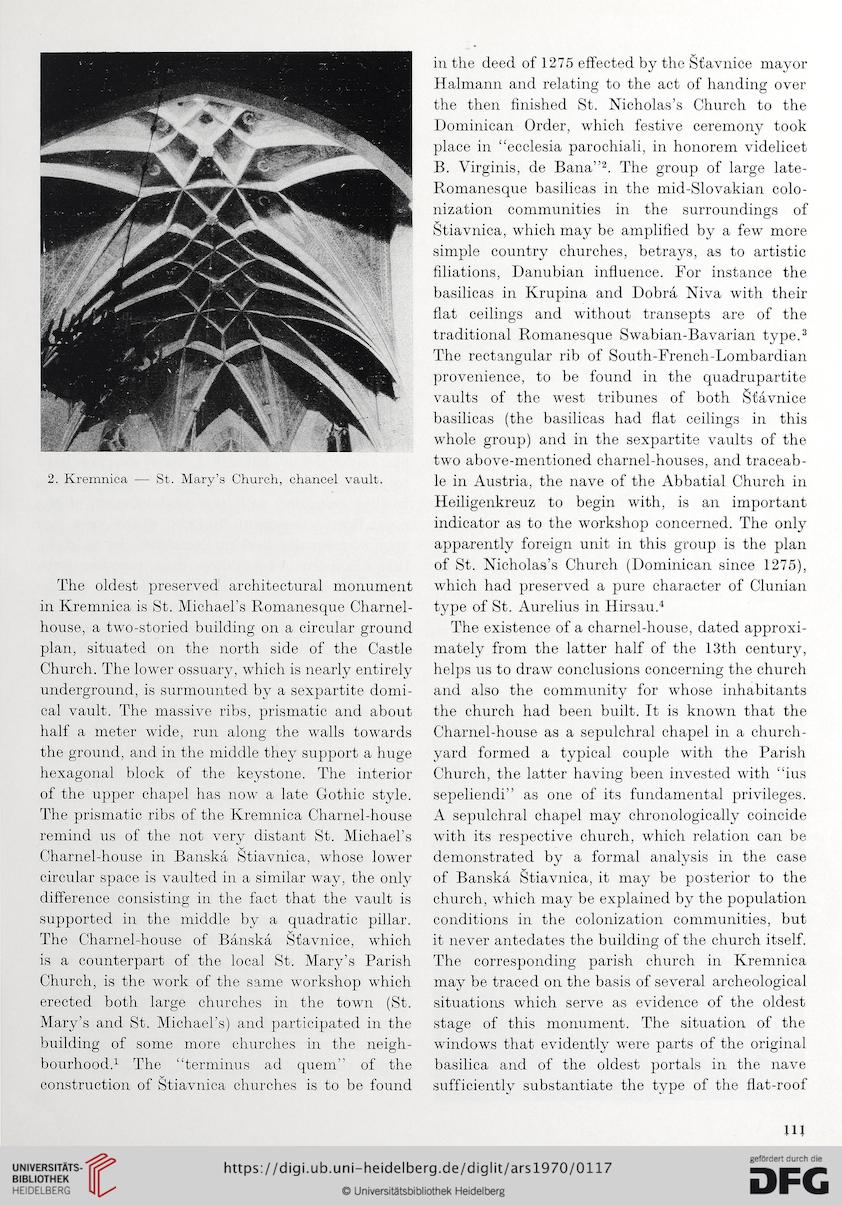 The oldest preserved architectural monument
in Kremnica is St. Michael’s Romanesque Charnel-
house, a two-storied building on a circular ground
plan, situated on the north side of the Castle
Church. The lower ossuary, which is nearly entirely
underground, is surmounted by a sexpartite domi-
cal vault. The massive ribs, prismatic and about
half a meter wide, run along the walls towards
the ground, and in the middle they support a huge
hexagonal block of the keystone. The inferior
of the upper chapel has now a late Gothic style.
The prismatic ribs of the Kremnica Charnel-house
remind us of the not very distant St. Michael’s
Charnel-house in Banská Štiavnica, whose lower
circular space is vaulted in a similar way, the only
différence consisting in the fact that the vault is
supported in the middle by a quadratic pillar.
The Charnel-house of Bánská Šťavnice, which
is a counterpart of the local St. Mary’s Parish
Church, is the work of the same workshop which
erected both large churches in the town (St.
Mary’s and St. Michael’s) and participated in the
building of sonie more churches in the neigh-
bourhood.1 The “terminus ad quem” of the
construction of Stiavnica churches is to be found

in the deed of 1275 effected by the Šťavnice mayor
Halmami and relating to the act of handing over
the then finished St. Nicholas’s Church to the
Dominican Order, which festive ceremony took
place in “ecclesia parochiali, in honorem videlicet
B. Virginis, de Bana”2. The group of large late-
Romanesque basilicas in the mid-Slovakian colo-
nization communities in the surroundings of
Štiavnica, which may be amplified by a few more
simple country churches, betrays, as to artistic
filiations, Danubian influence. For instance the
basilicas in Krupina and Dobrá Niva with their
flat ceilings and without transepts are of the
traditional Romanesque Swabian-Bavarian type.3
The rectangular rib of South-French-Lombardian
provenience, to be found in the quadrupartite
vaults of the west tribunes of both Šťávnice
basilicas (the basilicas had flat ceilings in this
whole group) and in the sexpartite vaults of the
two above-mentioned charnel-houses, and traceab-
le in Austria, the nave of the Abbatial Church in
Heiligenkreuz to begin with, is an important
indicator as to the workshop concerned. The only
apparently foreign unit in this group is the plan
of St. Nicholas’s Church (Dominican since 1275),
which had preserved a pure character of Clunian
type of St. Aurelius in Hirsau.4
The existence of a charnel-house, dated approxi-
mately from the latter half of the 13th Century,
helps us to draw conclusions concerning the church
and also the community for whose inhabitants
the church had been built. It is known that the
Charnel-house as a sepulchral chapel in a church-
yard formed a typical couple with the Parish
Church, the latter having been invested with “ius
sepeliendi” as one of its fundamental privilèges.
A sepulchral chapel may chronologically coïncide
with its respective church, which relation can be
demonstrated by a formai analysis in the case
of Banská Štiavnica, it may be posterior to the
church, which may be explained by the population
conditions in the colonization communities, but
it never antedates the building of the church itself.
The corresponding parish church in Kremnica
may be traced on the basis of several archeological
situations which serve as evidence of the oldest
stage of this monument. The situation of the
Windows that evidently were parts of the original
basilica and of the oldest portais in the nave
sufficiently substantiate the type of the flat-roof