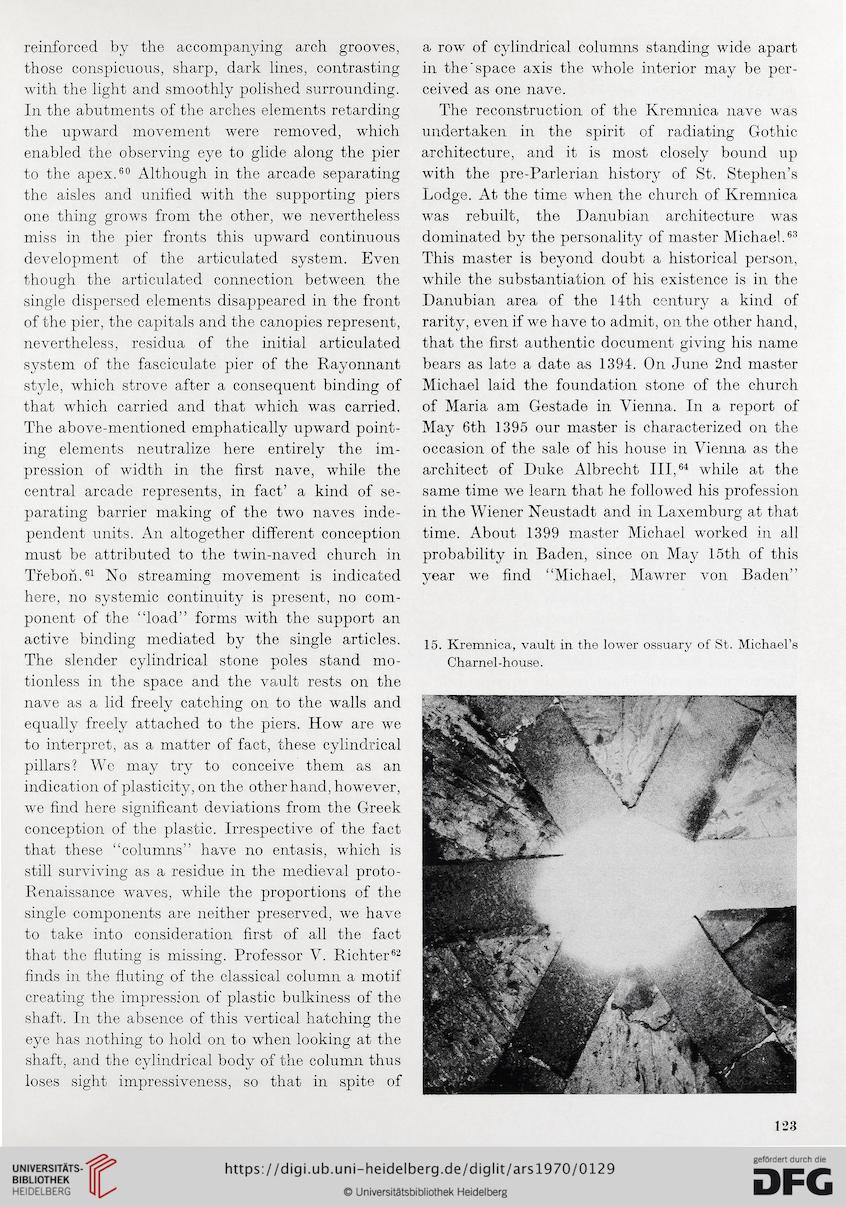 Information about OCR text
reinforced by the accompanying arch grooves,
those conspicuous, sharp, dark lineš, contrasting
with the light and smoothly polished surrounding.
In the abutments of the arches éléments retarding
the upward movement were removed, which
enabled the observing eye to glide along the pier
to the apex.60 Although in the arcade separating
the ais!es and unified with the supporting piers
one thing grows from the other, we nevertheless
miss in the pier fronts this upward continuons
development of the articulated systém. Even
though the articulated connection between the
single dispersed elements disappeared in the front
of the pier, the capitals and the canopies represent,
nevertheless, residua of the initial articulated
systém of the fasciculate pier of the Rayonnant
style, which strove after a conséquent binding of
that which carried and that which was carried.
The above-mentioned emphatically upward point-
ing elements neutralize here entirely the im-
pression of width in the first navě, while the
central arcade represents, in facť a kind of se-
parating barrier making of the two navěs inde-
pendent units. An altogether different conception
must be attributed to the twin-naved church in
Třeboň.61 No streaming movement is indicated
here, no systemic continuity is present, no com-
ponent of the “load” forms with the support an
active binding mediated by the single articles.
The slender cylindrical stone pôles stand mo-
tionless in the space and the vault rests on the
navě as a lid freely catching on to the walls and
equally freely attached to the piers. How are we
to interpret, as a matter of fact, these cylindrical
pillars? We may try to conceive them as an
indication of plasticity, on the other hand, however,
we find here significant déviations from the Greek
conception of the plastic. Irrespective of the fact
that these “columns” háve no entasis, which is
still surviving as a residue in the medieval proto-
Renaissance waves, while the proportions of the
single components are neither preserved, we háve
to také into considération first of all the fact
that the fluting is missing. Professor V. Richter62
finds in the fluting of the classical column a motif
creating the impression of plastic bulkiness of the
shaft. In the absence of this vertical hatching the
eye has nothing to hold on to when looking at the
shaft, and the cylindrical body of the column thus
loses sight impressiveness, so that in špite of

a row of cylindrical columns standing wide apart
in the’space axis the whole interior may be per-
ceived as one navě.
The reconstruction of the Kremnica navě was
undertaken in the spirit of radiating Gothic
architecture, and it is most dosely bound up
with the pre-Parlerian history of St. Stephen’s
Lodge. At the time when the church of Kremnica
was rebuilt, the Danubian architecture was
dominated by the personality of master Michael.63
This master is beyond doubt a historical person,
while the substantiation of his existence is in the
Danubian area of the 14th Century a kind of
rarity, even if we háve to admit, on the other hand,
that the first authentic document giving his name
bears as latě a date as 1394. On June 2nd master
Michael laid the foundation stone of the church
of Maria am Gestade in Vienna. In a report of
May 6th 1395 our master is characterized on the
occasion of the sale of his house in Vienna as the
architect of Duke Albrecht III,64 while at the
same time we learn that he followed his profession
in the Wiener Neustadt and in Laxemburg at that
time. About 1399 master Michael worked in all
probability in Baden, since on May 15th of this
year we find “Michael, Mawrer von Baden”

15. Kremnica, vault in the lower ossuary of St. Michael’s
Charnel-house.