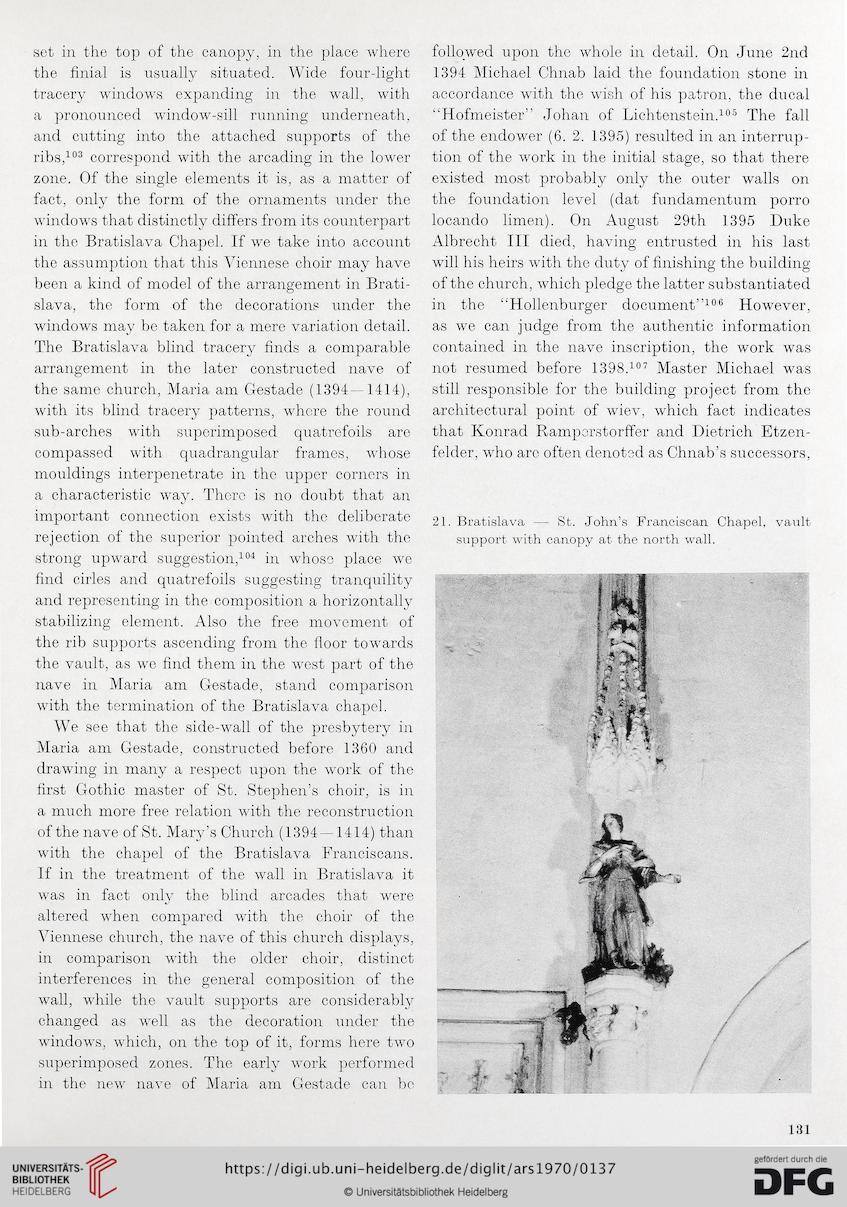 Information about OCR text
set in the top of the canopy, in the place where
the finial is usually situated. Wide fourdight
tracery Windows expanding in the wall, with
a pronounced window-sill running underneath,
and cutting into the attached supports of the
ribs,103 correspond with the arcading in the lower
zone. Of the single éléments it is, as a matter of
fact, oni y the form of the Ornaments under the
Windows that distinctly differs from its counterpart
in the Bratislava Chapel. If we také into account
the assumption that this Viennese choir may háve
been a kind of model of the arrangement in Brati-
slava, the form of the décorations under the
Windows may be taken for a mere variation detail.
The Bratislava blind tracery finds a comparable
arrangement in the later constructed navě of
the samo church, Maria am Gestade (1394 1414),
with its blind tracery patterns, where the round
sub-arches with superimposed quatrefoils are
compassed with quadrangular framcs, whose
mouldings interpenetrate in the upper corners in
a characteristic way. Thore is no doubt that an
important connection exists with tho deliberate
rejection of the superior pointed arches with the
strong upward suggestion,104 in whose place we
find cirles and quatrefoils suggesting tranquility
and representing in the composition a horizontally
stabilizing element. Also the free movement of
the rib supports ascending from the floor towards
the vault, as we find them in the west part of the
nave in Maria am Gestade, stand comparison
with the termination of the Bratislava chapel.
We see that the side-wall of the presbytery in
Maria am Gestade, constructed before 1360 and
drawing in many a respect upon the work of the
first Gothic master of St. Stephen’s choir, is in
a much more free relation with the reconstruction
of the nave of St. Mary’s Church (1394—1414) than
with the chapel of the Bratislava Franciscans.
If in the treatment of the wall in Bratislava it
was in fact only the blind arcades that were
altered when compared with the choir of the
Viennese church, the nave of this church displays,
in comparison with the older choir, distinct
interférences in the general composition of the
wall, while the vault supports are considerably
changed as well as the décoration under the
Windows, which, on the top of it, forms here two
superimposed zones. The early work performed
in the new nave of Maria am Gestade can bo

followed upon the whole in detail. On June 2nd
1394 Michael Chnab laid the foundation stone in
accordance with the wish of his patron, the ducal
“Hofmeister” Johan of Lichtenstein.105 The fall
of the endower (6. 2. 1395) resulted in an interrup-
tion of the work in the initial stage, so that there
existed most probably only the outer walls on
the foundation level (dat fundamentům porro
locando limen). On August 29th 1395 Duke
Albrecht III died, having entrusted in his last
will his heirs with the duty of finishing the building
of the church, which pledge the latter substantiated
in the “Hollenburger document”106 However,
as we can judge from the authentic information
contained in the nave inscription, the work was
not resumed before 1398.107 Master Michael was
still responsible for the building project from the
architectural point of wiev, which fact indicates
that Konrad Ramporstorffer and Dietrich Etzen-
felder, who arc offen denoted as Chnab’s successors,