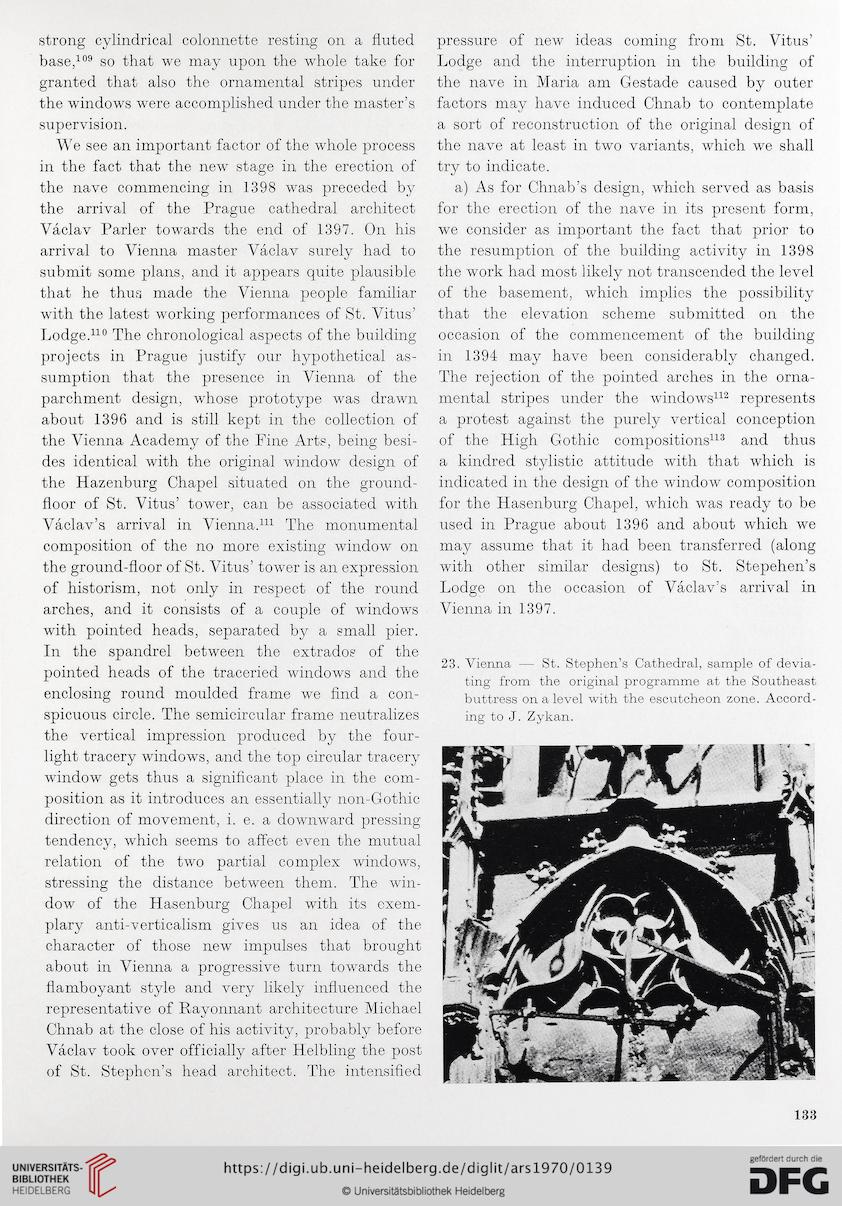 Information about OCR text
strong cylindrical colonnette resting on a fluted
base,109 so that we may upon the whole take for
granted that also the ornamental stripes under
the Windows were accomplished under the master’s
supervision.
We see an important factor of the whole process
in the fact that the new stage in the érection of
the nave commencing in 1398 was preceded by
the arrivai of the Prague cathédral architect
Václav Parler towards the end of 1397. On his
arrivai to Vienna master Václav surely had to
submit some plans, and it appears quite plausible
that he thus made the Vienna people familiär
with the latest working performances of St. Vitus’
Lodge.110 The chronological aspects of the building
projects in Prague justify our hypothetical as-
sumption that the presence in Vienna of the
parchment design, whose prototype was drawn
about 1396 and is still kept in the collection of
the Vienna Academy of the Fine Arts, being besi-
des identical with the original window design of
the Hazenburg Chapel situated on the ground-
floor of St. Vitus’ tower, can be associated with
Vâclav’s arrivai in Vienna.111 The monumental
composition of the no more existing window on
the ground-floor of St. Vitus’ tower is an expression
of historism, not only in respect of the round
arches, and it consists of a couple of Windows
with pointed heads, separated by a small pier.
In the spandrel between the extrados of the
pointed heads of the traceried Windows and the
enclosing round moulded frame we find a con-
spicuous circle. The semicircular frame neutralizes
the vertical impression produced by the four-
light tracery Windows, and the top circular tracery
window gets thus a significatif place in the com-
position as it introduces an essentially non-Gothic
direction of movement, i. e. a downward pressing
tendency, which seems to affect even the mutual
relation of the two partial complex Windows,
stressing the distance between them. The win-
dow of the Hasenburg Chapel with its exem-
pláry anti-verticalism gives us an idea of the
character of those new impulses that brought
about in Vienna a progressive turn towards the
flamboyant style and very likely influenced the
représentative of Rayonnant architecture Michael
Chnab at the close of his activity, probably before
Václav took over officially after Helbling the post
of St. Stephcn’s head architect. The intensified

pressure of new ideas coming from St. Vitus’
Lodge and the interruption in the building of
the nave in Maria am Gestade caused by outer
factors may have induced Chnab to contemplate
a sort of reconstruction of the original design of
the nave at least in two variants, which we shall
try to indicate.
a) As for Chnab’s design, which served as basis
for the érection of the nave in its present form,
we consider as important the fact that prior to
the resumption of the building activity in 1398
the work had most likely not transcended the level
of the basement, which implies the possibility
that the élévation scheme submitted on the
occasion of the commencement of the building
in 1394 may have been considerably changed.
The rejection of the pointed arches in the orna-
mental stripes under the Windows112 represents
a protest against the purely vertical conception
of the High Gothic compositions113 and thus
a kindred stylistic attitude with that which is
indicated in the design of the window composition
for the Hasenburg Chapel, which was ready to be
used in Prague about 1396 and about which we
may assume that it had been transferred (along
with other similar designs) to St. Stepehen’s
Lodge on the occasion of Vâclav’s arrivai in
Vienna in 1397.

23. Vienna — St. Stephen’s Cathédral, sample of devia-
ting from the original programme at the Southeast
buttress on a level with the escutcheon zone. Accord-
ing to J. Zykan.