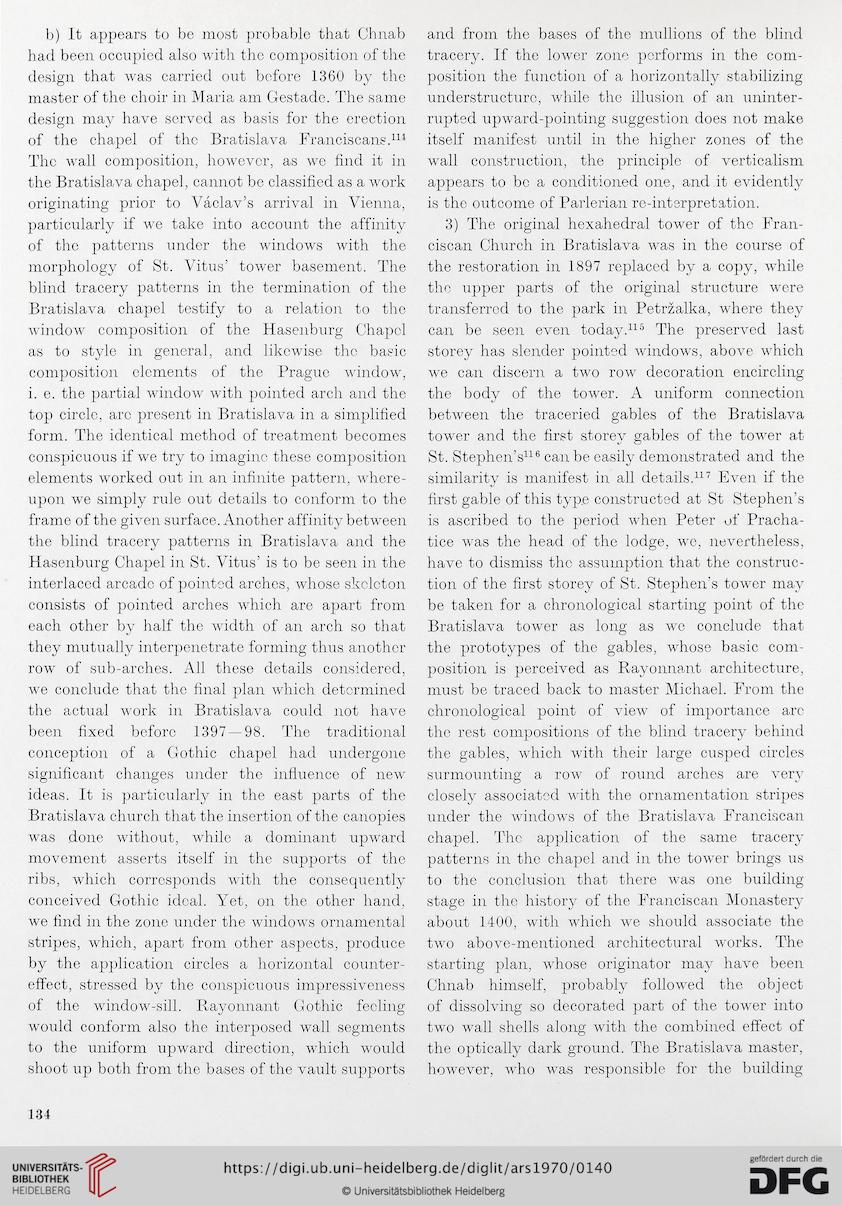 Information about OCR text
b) lt appears to be most probable that Chnab
h ad been occupied also with the composition of the
design that was carried ont before 1360 b y the
master of the choir in Maria am Gestade. The same
design may hâve served as basis for the érection
of the chapel of the Bratislava Franciscans.111
The wall composition, howevcr, as we find it in
the Bratislava chapel, cannot be classified as a work
originating prior to Vâclav’s arrivai in Vienna,
particularly if we take into account the affinity
of the patterns under the Windows with the
morphology of St. Vitus’ tower basement. The
blind tracery patterns in the termination of the
Bratislava chapel testify to a relation to the
window composition of the Hasenburg Chapel
as to style in general, and likewise the basic
composition cléments of the Prague window,
i. e. the partial window with pointed arch and the
top circle, are present in Bratislava in a simplified
form. The identical method of treatment becomes
conspicuous if we try to imagine these composition
éléments workecl out in an infinite pattern, where-
upon we simply rule ont details to conform to the
frame of the given surface. Another affinity between
the blind tracery patterns in Bratislava and the
Hasenburg Chapel in St. Vitus’ is to be seen in the
interlaced arcade of pointed arches, whose skeleton
consists of pointed arches which are apart from
each other by half the width of an arch so that
they mutually interpenetrate forming thus another
row of sub-arches. Ail these details considered,
we conclude that the final plan which detormined
the actual work in Bratislava could not hâve
been fixed before 1397 — 98. The traditional
conception of a Gothic chapel had undergone
significant changes under the influence of new
ideas. It is particularly in the east parts of the
Bratislava church that the insertion of the canopies
was doue without, while a dominant upward
movement asserts itself in the supports of the
ribs, which corresponds with the consequently
conceived Gothic ideal. Yet, on the other hand.
we find in the zone under the Windows ornamental
stripes, which, apart from other aspects, produce
by the application circles a horizontal counter-
effect, stressed by the conspicuous impressiveness
of the window-sill. Rayonnant Gothic feoling
woulcl conform also the interposée! wall segments
to the uniform upward direction, which would
shoot up both from the bases of the vault supports

and from the bases of the mullions of the blind
tracery. If the lower zone perforais in the com-
position the function of a horizontally stabilizing
understructuro, while the illusion of an uninter-
rupted upward-pointing suggestion does not make
itself manifest until in the higher zones of the
wall construction, the principle of verticalism
appears to be a conditioned one, and it evidently
is the outcome of Parlerian re-interpretation.
3) The original hexahedral tower of the Fran-
ciscan Church in Bratislava was in the course of
the restoration in 1897 replaced by a copy, while
the upper parts of the original structure were
transferred to the park in Petržalka, where they
can be seen even today.115 The preserved last
storey has slender pointed Windows, above which
we can discern a two row décoration encircling
the body of the tower. A uniform connection
between the traceried gables of the Bratislava
tower and the first storey gables of the tower at
St. Stephen’s116 can be easily demonstrated and the
similarity is manifest in ail details.117 Even if the
first gable of this type constructed at St Stephen’s
is aseribed to the period when Peter of Pracha-
tice was the head of the lodge, we, nevertheless,
hâve to dismiss the assumption that the construc-
tion of the first storey of St. Stephen’s tower may
be taken for a chronological starting point of the
Bratislava tower as long as we conclude that
the prototypes of the gables, whose basic com-
position is perceived as Rayonnant architecture,
must be tracecl back to master Michael. From the
chronological point of view of importance arc
the rest compositions of the blind tracery behind
the gables, which with their large cusped circles
surmounting a row of round arches are very
dosely associated with the ornamentation stripes
under the Windows of the Bratislava Franciscan
chapel. The application of the same tracery
patterns in the chapel and in the tower brings us
to the conclusion that there was one building-
stage in the history of the Franciscan Monastery
about 1400, with which we should associate the
two above-mentioned architectural works. The
starting plan, whose originator may hâve been
Chnab himself, probably foliowed the object
of dissolving so decorated part of the tower into
two wall shells along with the combincd effect of
the optically dark ground. The Bratislava master,
however, who was responsible for the building