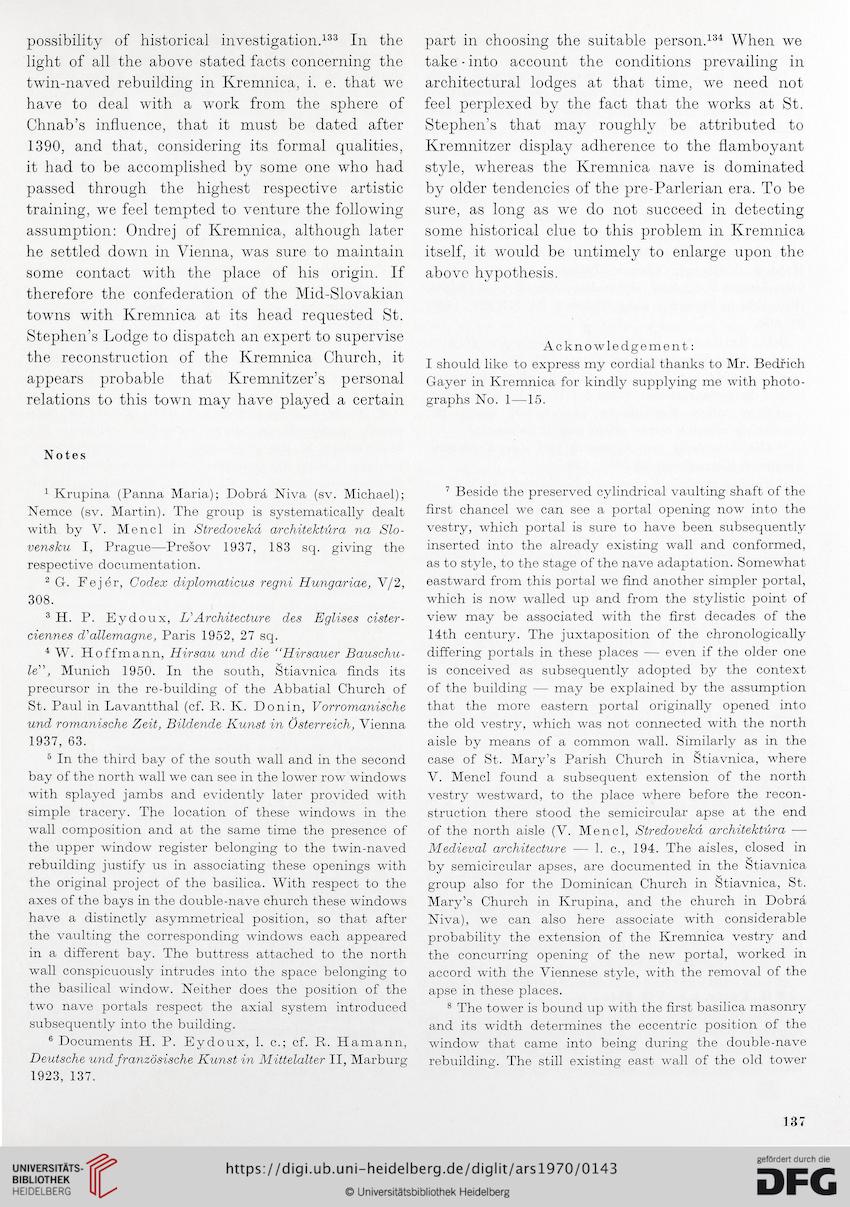 Information about OCR text
possibility of historical investigation.133 In the
light of all the above stated facts concerning the
twin-naved rebuilding in Kremnica, i. e. that we
háve to deal with a work from the sphere of
Chnab’s influence, that it must be dated after
1390, and that, considering its formai qualifies,
it had to be accomplished by some one who had
passed through the highest respective artistic
training, we feel tempted to venture the following
assumption: Ondřej of Kremnica, although later
he settled down in Vienna, was sure to maintain
some contact with the place of his origin. If
therefore the confédération of the Mid-Slovakian
towns with Kremnica at its head requested St.
Stephen’s Lodge to dispatch an expert to supervise
the reconstruction of the Kremnica Church, it
appears probable that Kremnitzer’s personal
relations to this town may hâve played a certain

part in choosing the suitable person.134 When we
take - into account the conditions prevailing in
architectural lodges at that time, we need not
feel perplexed b y the fact that the works at St.
Stephen’s that may roughly be attributed to
Kremnitzer display adhérence to the flamboyant
style, whereas the Kremnica nave is dominated
by older tendencies of the pre-Parlerian era. To be
sure, as long as we do not succeed in dctecting
some historical due to this problém in Kremnica
itself, it would be untimely to enlarge upon the
above hypothesis.

Ac knowledge ment:
I should like to express my cordial thanks to Mr. Bedřich
Gayer in Kremnica for kindly supplying me with photo -
graphs No. 1—15.

Notes
1 Krupina (Panna Maria); Dobrá Niva (sv. Michael);
Nemce (sv. Martin). The group is systematically dealt
with by V. Mencl in Středověká architektúra na Slo-
vensku I, Prague—Prešov 1937, 183 sq. giving the
respective documentation.
2 G. Fejér, Codex diplomaticus regni Hungariae, V/2,
308.
3 H. P. Eydoux, L'Architecture des Eglises cister-
ciennes d'allemagne, Paris 1952, 27 sq.
4 W. Hoffmann, Hirsau und die “Hirsauer Bauschu-
le" , Munich 1950. In the south, Štiavnica finds its
precursor in the re-building of the Abbatial Church of
St. Paul in Lavantthal (cf. R. K. Donin, Vor romanische
und romanische Zeit, Bildende Kunst in Österreich, Vienna
1937, 63.
5 In the third bay of the south wall and in the second
bay of the north wall we can see in the lower row Windows
with splayed jambs and evidently later provided with
simple tracery. The location of these Windows in the
wall composition and at the same time the presence of
the upper window register belonging to the twin-naved
rebuilding justify us in associating these openings with
the original project of the basilica. With respect to the
axes of the bays in the double-nave church these Windows
hâve a distinetly asymmetrical position, so that after
the vaulting the corresponding Windows each appeared
in a different bay. The buttress attached to the north
wall conspicuously intrudes into the space belonging to
the basilical window. Neither does the position of the
two nave portais respect the axial systém introduced
subsequently into the building.
6 Documents H. P. Eydoux, 1. c.; cf. R. Hamann,
Deutsche und französische Kunst in Mittelalter II, Marburg
1923, 137.

7 Beside the preserved cylindrical vaulting shaft of the
first chancel we can see a portal opening now into the
vestry, which portal is sure to have been subsequently
inserted into the already existing wall and conformed,
as to style, to the stage of the nave adaptation. Somewhat
eastward from this portal we find another simpler portal,
which is now walled up and from the stylistic point of
view may be associated with the first decades of the
14th Century. The juxtaposition of the chronologically
differing portais in these places — even if the older one
is conceived as subsequently adopted by the context
of the building — may be explained by the assumption
that the more eastern portal originally opened into
the old vestry, which was not connected with the north
aisle by means of a common wall. Similarly as in the
case of St. Mary’s Parish Church in Štiavnica, where
V. Mencl found a subséquent extension of the north
vestry westward, to the place where before the recon-
struction there stood the semicircular apse at the end
of the north aisle (V. Mencl, Středověká architektúra —
Medieval architecture — 1. c., 194. The aisles, closed in
by semicircular apses, are documented in the Štiavnica
group also for the Dominican Church in Štiavnica, St.
Mary’s Church in Krupina, and the church in Dobrá
Niva), we can also here associate with considérable
probability the extension of the Kremnica vestry and
the concurring opening of the new portal, worked in
accord with the Viennese style, with the removal of the
apse in these places.
8 The tower is bound up with the first basilica masonry
and its width détermines the eccentric position of the
window that came into being during the double-nave
rebuilding. The still existing east wall of the old tower