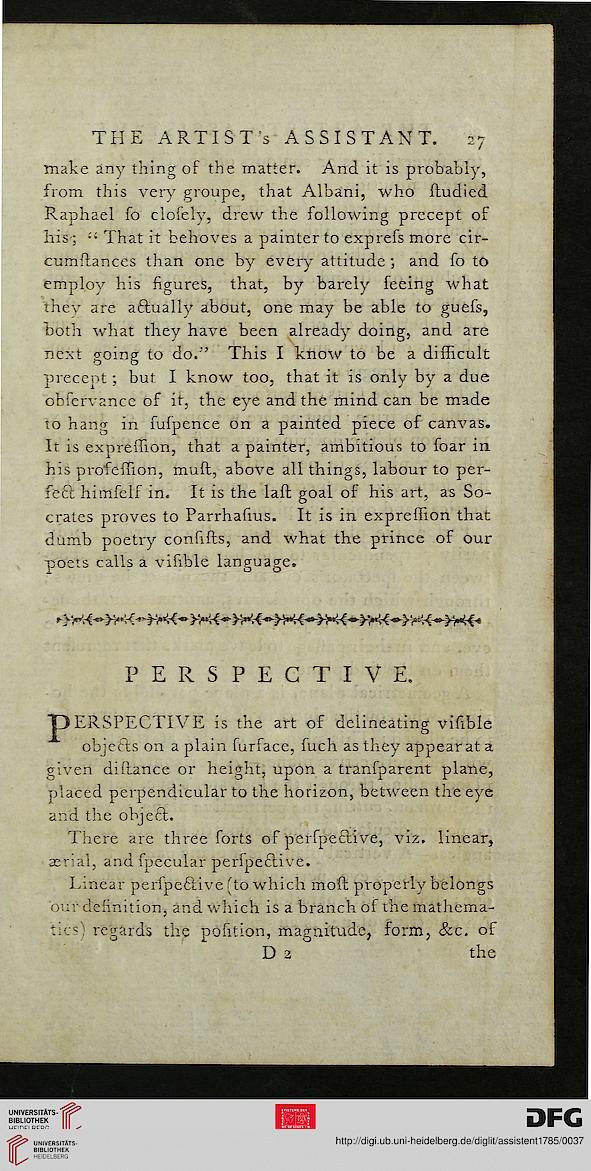 make any thing of the matter. And it is probably,
from this very groupe, that Albani, who ftudied
Raphael fo clofely, drew the following precept of
his ; 64 That it behoves a painter to exprefs more cir-
curnftances than one by every attitude ; and fo t6
employ his figures, that, by barely feeing what
they are a&ually about, one may be able to guefs,
both what they have been already doing, and are
next going to do.'' This I know to be a difficult
precept ; but I know too, that it is only by a due
obfervance of it, the eye and the mind can be made
to hang in fufpence on a painted piece of canvas.
It is expreffion, that a painter, ambitious to foar in
his profeffion, muft, above all things, labour to per-
fect himfelf in. It is the laft goal of his art, as So-
crates proves to Parrhafius. It is in expreffion that
dumb poetry connfts, and what the prince of our
poets calls a vifible language.

pERSPECTIVE is the art of delineating vifible
objects on a plain furface, fuch as they appear at a
given diftance or height, upon a tranfparent plane,
placed perpendicular to the horizon, between the eye
and the ohjecb.

Linear perfpeftive (to which moft properly belongs
our definition, and which is a branch of the mathema-
tics'; regards the pofition, magnitude, form, &c. of