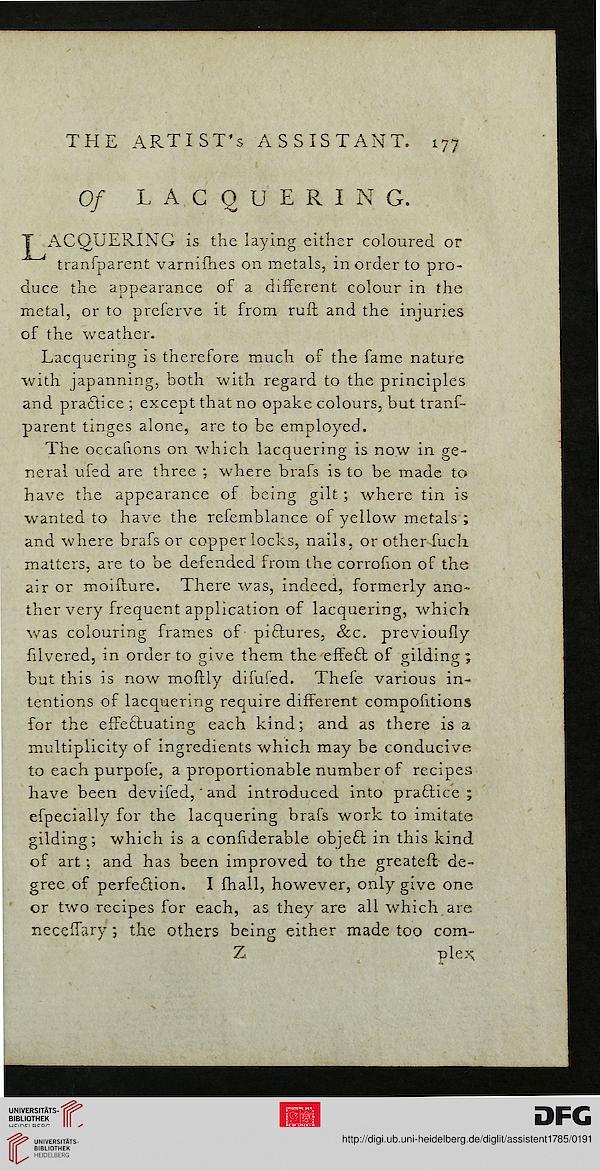 T.ACQUER.ING is the laying cither coloured or
tranfparent varnifhes on metals, in order to pro-
duce the appearance of a different colour in the
metal, or to preferve it from ruft and the injuries
of the weather.

Lacquering is therefore much of the fame nature
with japanning, both with regard to the principles
and practice ; except that no opake colours, but tranf-
parent tinges alone, are to be employed.

The occafions on which lacquering is now in ge-
neral ufed are three ; where brafs is to be made to
have the appearance of being gilt ; where tin is
wanted to have the refemblance of yellow metals ;
and where brafs or copper locks, nails, or other fuch
matters, are to be defended from the corrofion of the
air or moifture. There was, indeed, formerly ano-
ther very frequent application of lacquering, which
was colouring frames of pictures, &c. previoufly
filvered, in order to give them the effect of gilding ;
but this is now moftly difufed. Thefe various in-
tentions of lacquering require different compohtions
for the effectuating each kind: and as there is a
multiplicity of ingredients which may be conducive
to each purpofe, a proportionable number of recipes
have been devifed, and introduced into pra&ice ;
efpecially for the lacquering brafs work to imitate
gilding; which is a confiderable object in this kind
of art ; and has been improved to the greateft de-
gree of perfection. I fhall, however, only give one
or two recipes for each, as they are all which are
neceffary ; the others being either made too com-