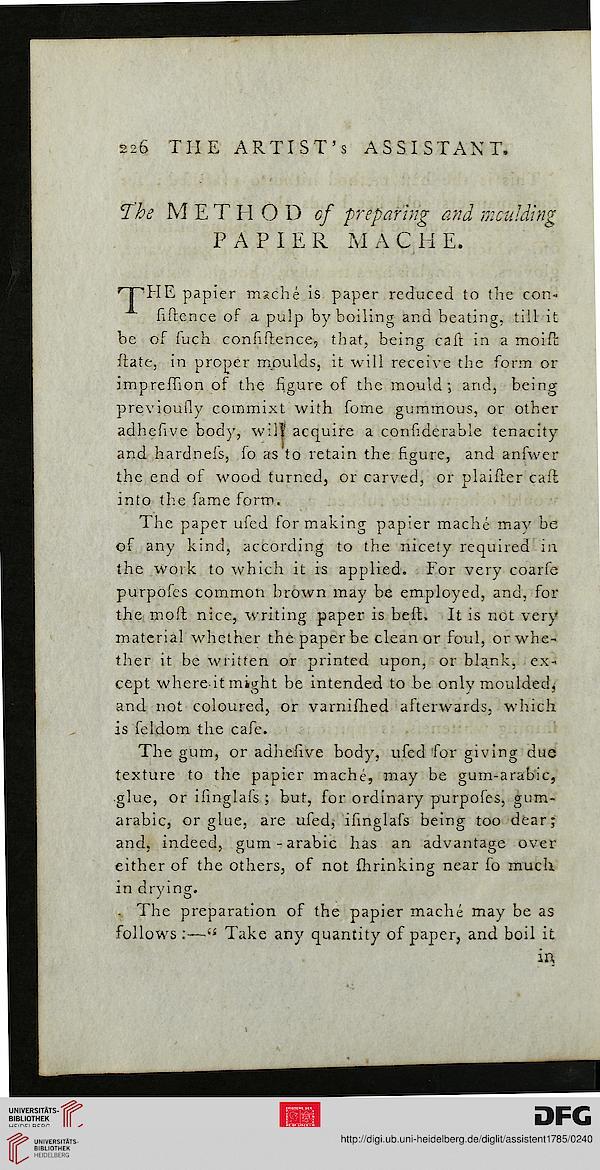 The METHOD cf preparing and moulding
PAPIER MAC HE.

r J^TIE papier mstche is paper reduced to the con-
fidence of a pulp by boiling and beating, till it
be of fuch confidence, that, being call: in a moift
ftate, in proper moulds, it will receive the form or
impreffion of the figure of the mould', and, being
previouily commixt with fome gummous, or other
adhefive body, w:l| acquire a confiderable tenacity
and hardnefs, fo as to retain the figure, and anfwer
the end of wood turned, or carved, or plaifler caft
into the fame form.

The paper ufed for making papier mache mav be
of any kind, according to the nicety required in
the work to which it is applied. For very coarfe
purpofcs common brown may be employed, and, for
the mofl nice, writing paper is beft. It is not very
material whether the paper be cleaner foul, or whe-
ther it be written or printed upon, or blank, ex-
cept where itmight be intended to be only moulded,
and not coloured, or varnifhed afterwards, which
is feldom the cafe.

The gum, or adhefive body, ufed for giving due
texture to the papier mache, may be gum-arabic,
glue, or ifinglals ; but, for ordinary purpofes, gum-
arabic, or glue, are ufed, ifinglafs being too dear;
and, indeed, gum-arabic has an advantage over
either of the others, of not fhrinking near fo much
in drvincr.

. The preparation of the papier mache may be as
follows :—& Take any quantity of paper, and boil it