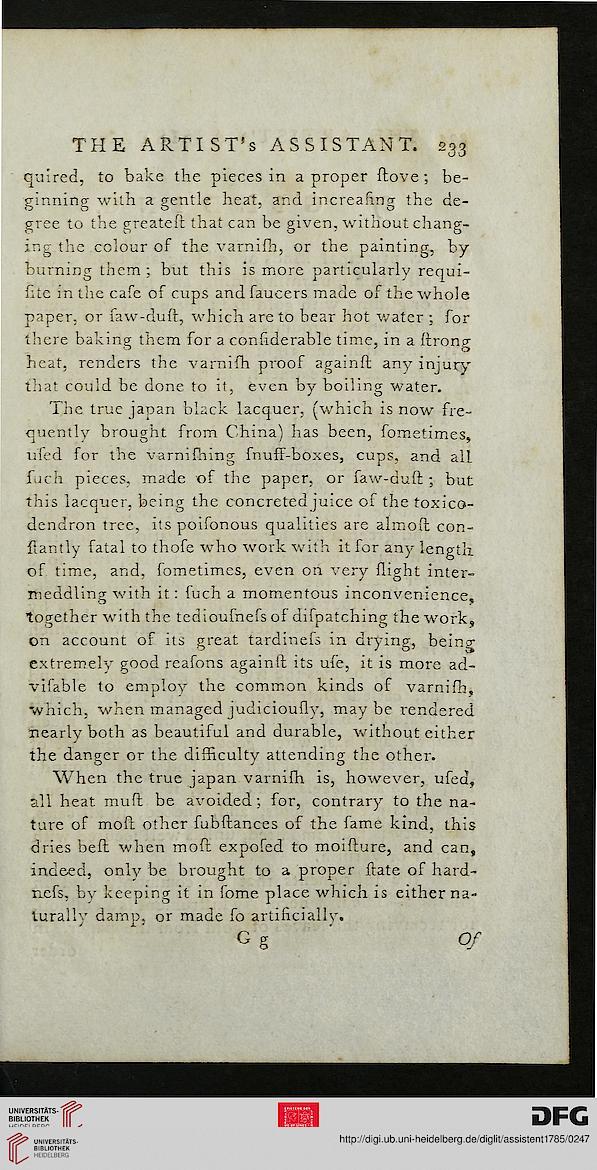 quired, to bake the pieces in a proper Move; be-
ginning with a gentle heat, and increasing the de-
gree to the greateft that can be given, without chang-
ing the colour of the varnifh, or the painting, by-
burning them: but this is more particularly requi-
fite in the cafe of cups and faucers made of the whole
paper, or faw-duft, which are to bear hot water ; for
there baking them for a confiderable time, in a ftrong
heat, renders the varnifh proof againft any injury
that could be done to it, even bv boiling water.

The true japan black lacquer, (which is now fre-
quentlv brought from China) has been, fometimes,
ufed for the varnifhing fnuff-boxes, cups, and all
fuch pieces, made of the paper, or faw-duft ; but
this lacquer, being the concreted juice of the toxico-
dendron tree, its poifonous qualities are almoft con-
flantly fatal to thofe who work with it for any length
of time, and, fometimes, even on very flight inter-
meddling with it: fuch a momentous inconvenience,
together with the tedioufnefs of difpatching the work,
on account of its great tardinefs in drying, being
extremely good reafons againft its ufe, it is more ad-
vifable to employ the common kinds of varnifh,
which, when managed judicioufly, maybe rendered
nearly both as beautiful and durable, without either
the danger or the difficulty attending the other.

When the true japan varnifh is, however, ufed,
s.ll heat muft be avoided;, for, contrary to the na-
ture of moft other fubftances of the fame kind, this
dries beft when moft expofed to moifture, and can,
indeed, only be brought to a proper ftate of hard-
nefs. by keeping it in fome place which is either na-
turally damp, or made fo artificially.