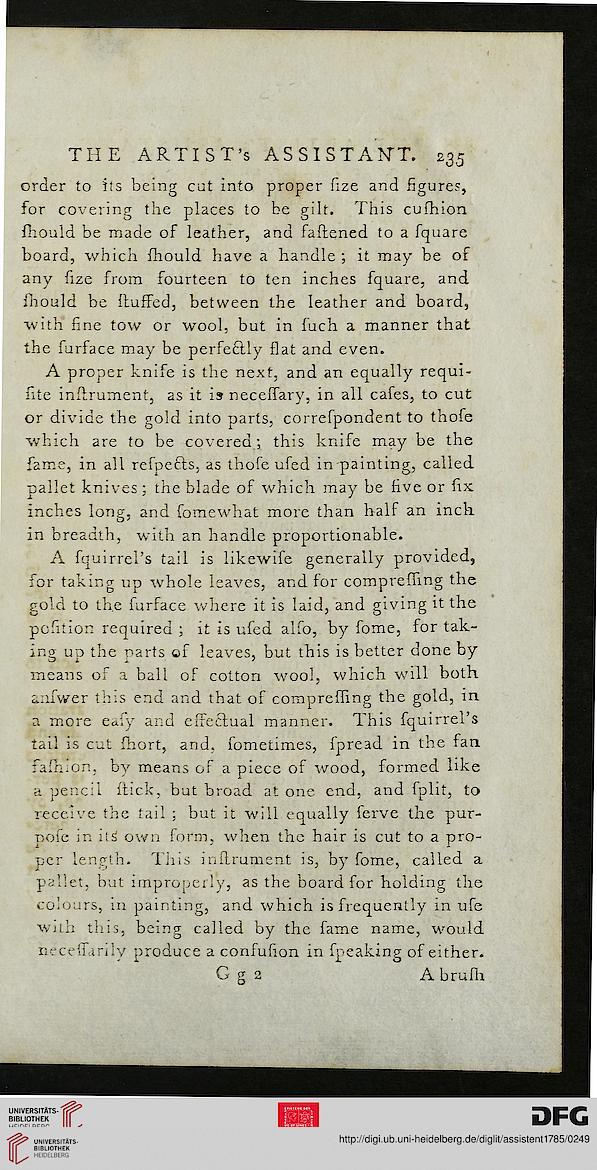 order to its being cut into proper fize and figure?,
for covering the places to be gilt. This cufhion
fhould be made of leather, and faftened to a fquare
board, which fhould have a handle ; it may be of
any fize from fourteen to ten inches fquare, and
fhould be fluffed, between the leather and board,
with fine tow or wool, but in fuch a manner that
the furface may be perfectly flat and even.

A proper knife is the next, and an equally requi-
fite inftrument, as it is neceffary, in all cafes, to cut
or divide the gold into parts, correfpondent to thofe
which are to be covered ; this knife may be the
fame, in all refpefts, as thofe ufed in-painting, called
pallet knives ; the blade of which may be five or fix
inches long, and fomewhat more than half an inch
in breadth, with an handle proportionable.

A fquirrel's tail is likewife generally provided,
for taking up whole leaves, and for compreffing the
gold to the furface where it is laid, and giving it the
pofition required ; it is ufed alfo, by fome, for tak-
ing uo the narts of leaves, but this is better done by
means of a ball of cotton woo!, which will both
anfwer this end and that of compreffing the gold, in
a more eafy and effectual manner. This fquirrel's
tail is cut fhort, and, fometimes, fpread in the fan
fafhion, bv means of a piece of wood, formed like
a pencil flick, but broad at one end, and fplit, to
receive the tail ; but it will equally ferve the pur-
pole in its' own form, when the hair is cut to a pro-
per length. This inflrument is, by fome, called a
pallet, but improperly, as the board for holding the
colours, in painting, and which is frequently in ufe
With this, being called by the fame name, would
neceffirily produce a confufion in fpeaking of either.