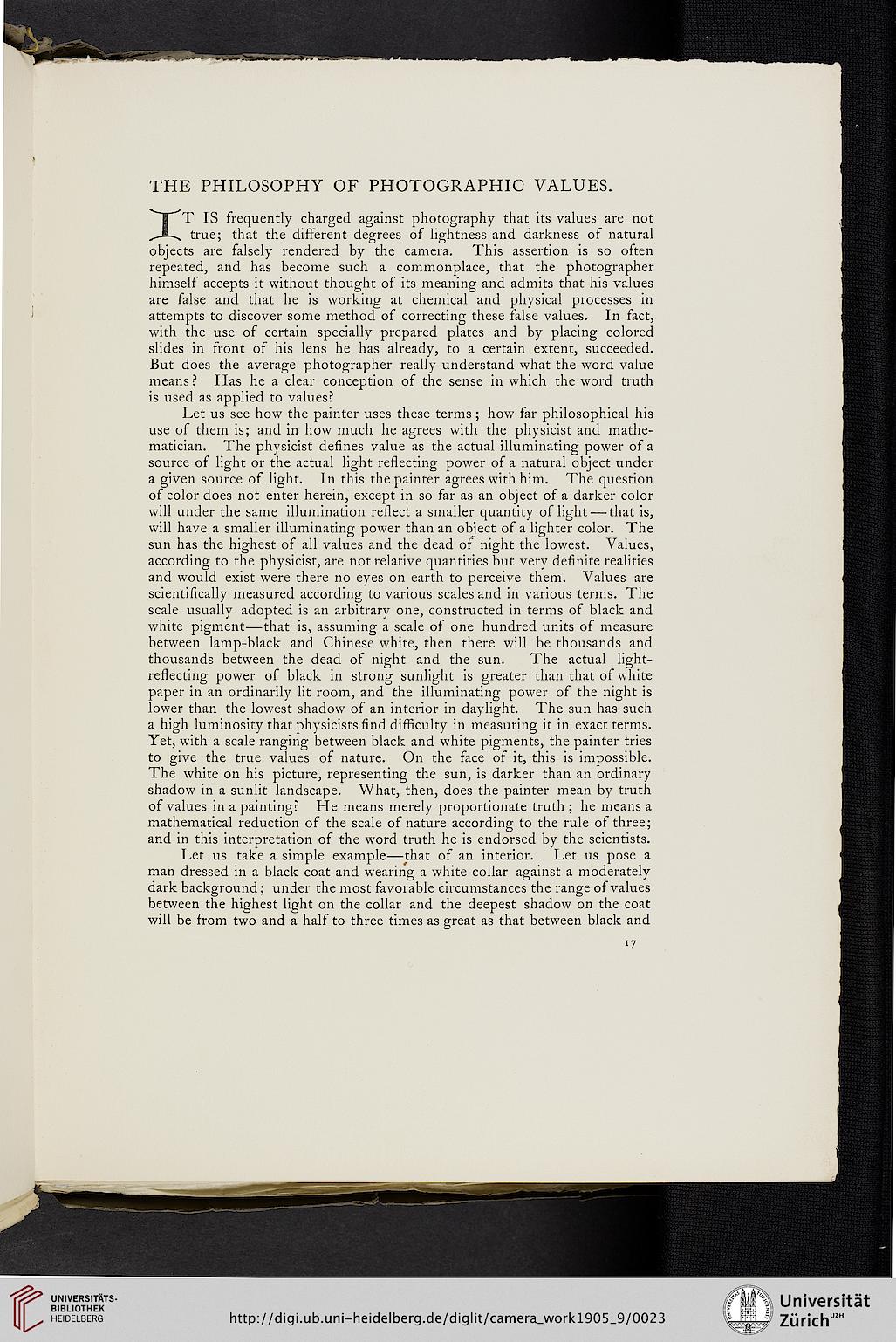 Information about OCR text
THE PHILOSOPHY OF PHOTOGRAPHIC VALUES.

IT IS frequently charged against photography that its values are not
true; that the different degrees of lightness and darkness of natural
objects are falsely rendered by the camera. This assertion is so often
repeated, and has become such a commonplace, that the photographer
himself accepts it without thought of its meaning and admits that his values
are false and that he is working at chemical and physical processes in
attempts to discover some method of correcting these false values. In fact,
with the use of certain specially prepared plates and by placing colored
slides in front of his lens he has already, to a certain extent, succeeded.
But does the average photographer really understand what the word value
means? Has he a clear conception of the sense in which the word truth
is used as applied to values?
Let us see how the painter uses these terms; how far philosophical his
use of them is; and in how much he agrees with the physicist and mathe-
matician. The physicist defines value as the actual illuminating power of a
source of light or the actual light reflecting power of a natural object under
a given source of light. In this the painter agrees with him. The question
of color does not enter herein, except in so far as an object of a darker color
will under the same illumination reflect a smaller quantity of light — that is,
will have a smaller illuminating power than an object of a lighter color. The
sun has the highest of all values and the dead of night the lowest. Values,
according to the physicist, are not relative quantities but very definite realities
and would exist were there no eyes on earth to perceive them. Values are
scientifically measured according to various scales and in various terms. The
scale usually adopted is an arbitrary one, constructed in terms of black and
white pigment—that is, assuming a scale of one hundred units of measure
between lamp-black and Chinese white, then there will be thousands and
thousands between the dead of night and the sun. The actual light-
reflecting power of black in strong sunlight is greater than that of white
paper in an ordinarily lit room, and the illuminating power of the night is
lower than the lowest shadow of an interior in daylight. The sun has such
a high luminosity that physicists find difficulty in measuring it in exact terms.
Yet, with a scale ranging between black and white pigments, the painter tries
to give the true values of nature. On the face of it, this is impossible.
The white on his picture, representing the sun, is darker than an ordinary
shadow in a sunlit landscape. What, then, does the painter mean by truth
of values in a painting? He means merely proportionate truth ; he means a
mathematical reduction of the scale of nature according to the rule of three;
and in this interpretation of the word truth he is endorsed by the scientists.
Let us take a simple example—that of an interior. Let us pose a
man dressed in a black coat and wearing a white collar against a moderately
dark background; under the most favorable circumstances the range of values
between the highest light on the collar and the deepest shadow on the coat
will be from two and a half to three times as great as that between black and