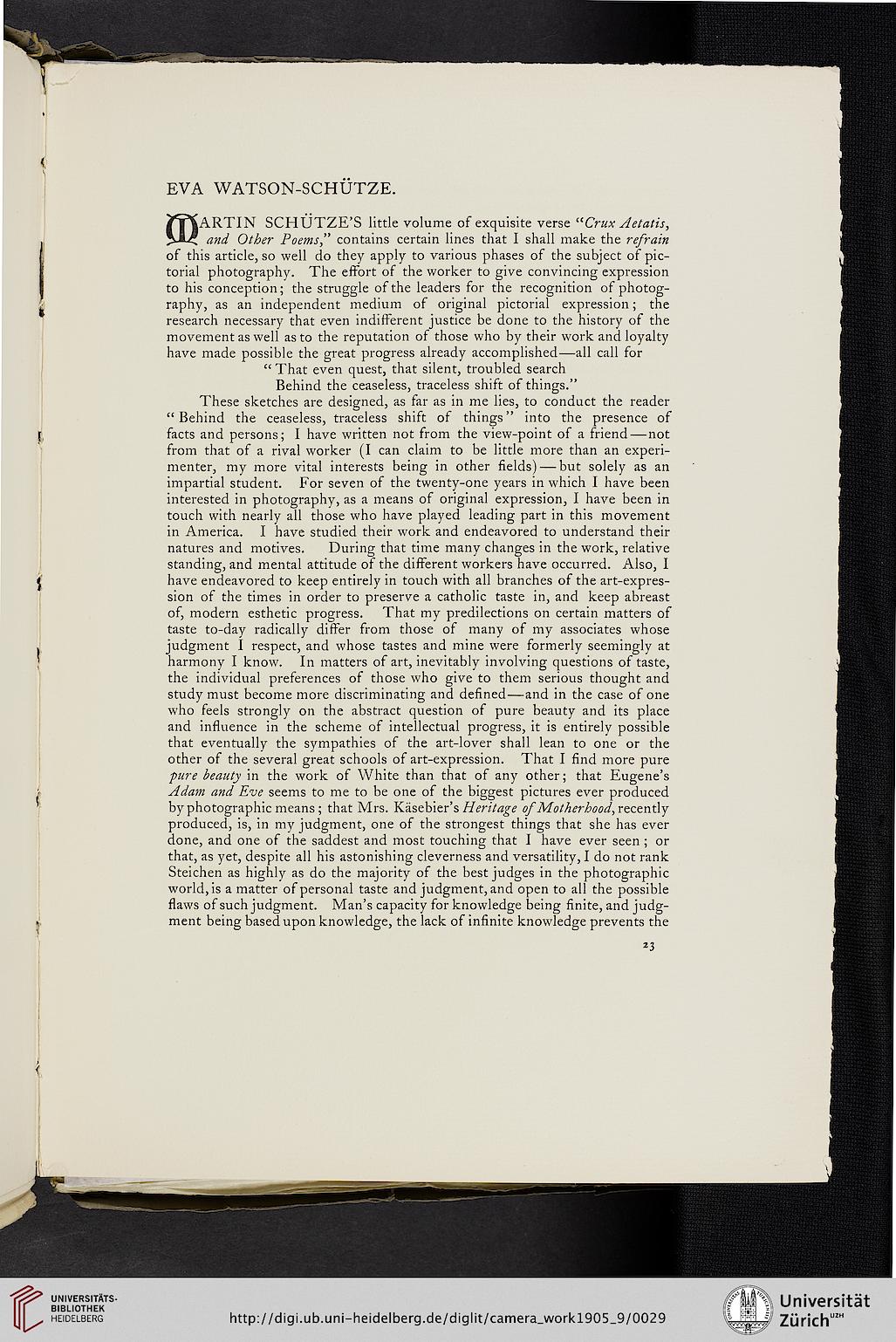 MARTIN SCHÜTZE'S little volume of exquisite verse “Crux Aetatis ,
and Other Poems ,” contains certain lines that I shall make the refrain
of this article, so well do they apply to various phases of the subject of pic-
torial photography. The effort of the worker to give convincing expression
to his conception; the struggle of the leaders for the recognition of photog-
raphy, as an independent medium of original pictorial expression; the
research necessary that even indifferent justice be done to the history of the
movement as well as to the reputation of those who by their work and loyalty
have made possible the great progress already accomplished—all call for
“That even quest, that silent, troubled search
Behind the ceaseless, traceless shift of things.”
These sketches are designed, as far as in me lies, to conduct the reader
“ Behind the ceaseless, traceless shift of things ” into the presence of
facts and persons; I have written not from the view-point of a friend — not
from that of a rival worker (I can claim to be little more than an experi-
menter, my more vital interests being in other fields) — but solely as an
impartial student. For seven of the twenty-one years in which I have been
interested in photography, as a means of original expression, I have been in
touch with nearly all those who have played leading part in this movement
in America. I have studied their work and endeavored to understand their
natures and motives. During that time many changes in the work, relative
standing, and mental attitude of the different workers have occurred. Also, I
have endeavored to keep entirely in touch with all branches of the art-expres-
sion of the times in order to preserve a catholic taste in , and keep abreast
of, modern esthetic progress. That my predilections on certain matters of
taste to-day radically differ from those of many of my associates whose
judgment I respect, and whose tastes and mine were formerly seemingly at
harmony I know. In matters of art, inevitably involving questions of taste,
the individual preferences of those who give to them serious thought and
study must become more discriminating and defined—and in the case of one
who feels strongly on the abstract question of pure beauty and its place
and influence in the scheme of intellectual progress, it is entirely possible
that eventually the sympathies of the art-lover shall lean to one or the
other of the several great schools of art-expression. That I find more pure
pure beauty in the work of White than that of any other; that Eugene’s
Adam and Eve seems to me to be one of the biggest pictures ever produced
by photographic means; that Mrs. Käsebier’sHeritage of Motherhood,recently
produced, is, in my judgment, one of the strongest things that she has ever
done, and one of the saddest and most touching that I have ever seen ; or
that, as yet, despite all his astonishing cleverness and versatility, I do not rank
Steichen as highly as do the majority of the best judges in the photographic
world,is a matter of personal taste and judgment, and open to all the possible
flaws of such judgment. Man’s capacity for knowledge being finite, and judg-
ment being based upon knowledge, the lack of infinite knowledge prevents the