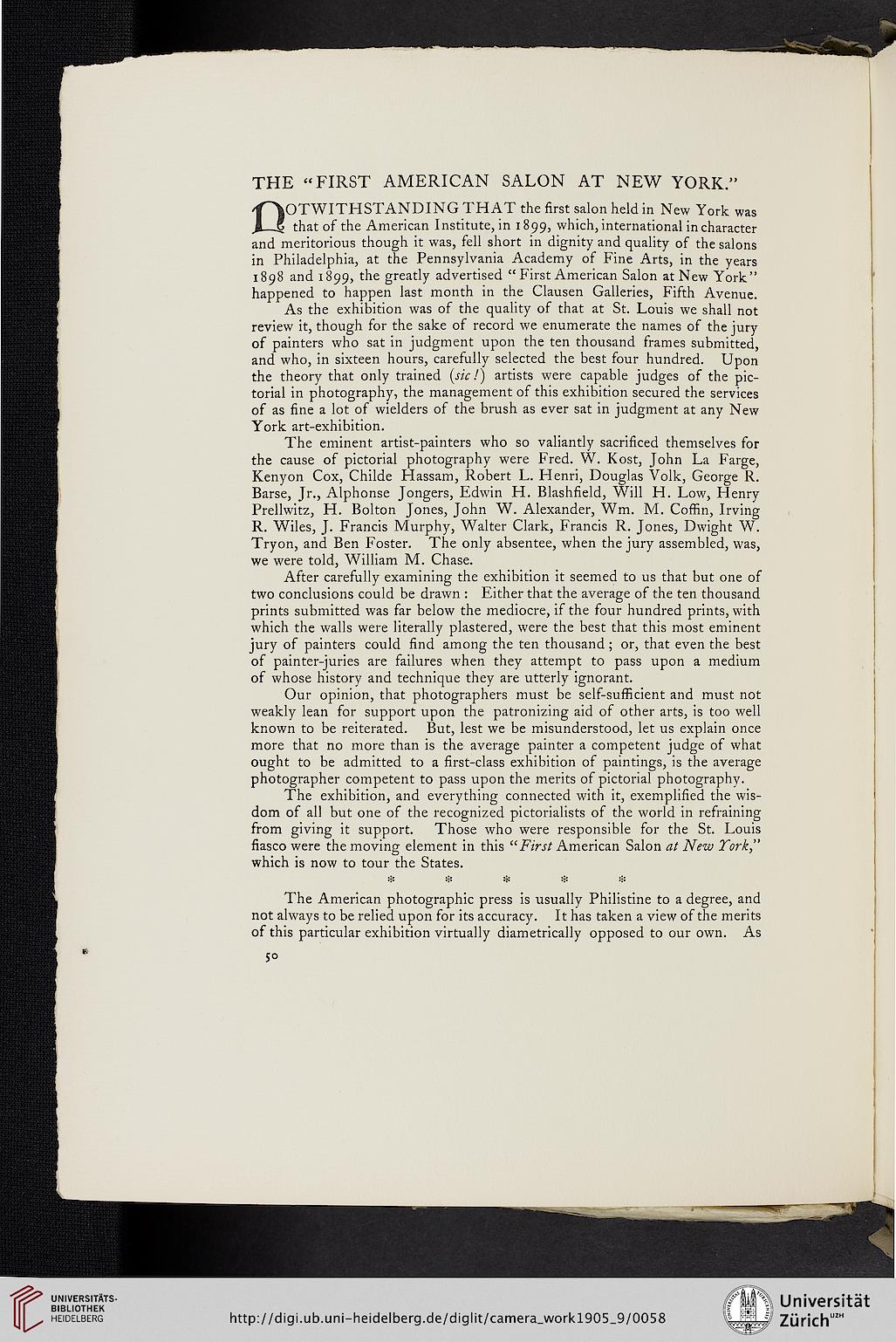 NOTWITHSTANDING THAT the first salon held in New York was
that of the American Institute, in 1899, which, international in character
and meritorious though it was, fell short in dignity and quality of the salons
in Philadelphia, at the Pennsylvania Academy of Fine Arts, in the years
1898 and 1899, the greatly advertised " First American Salon at New York”
happened to happen last month in the Clausen Galleries, Fifth Avenue.
As the exhibition was of the quality of that at St. Louis we shall not
review it, though for the sake of record we enumerate the names of the jury
of painters who sat in judgment upon the ten thousand frames submitted,
and who, in sixteen hours, carefully selected the best four hundred. Upon
the theory that only trained (sic !) artists were capable judges of the pic-
torial in photography, the management of this exhibition secured the services
of as fine a lot of wielders of the brush as ever sat in judgment at any New
York art-exhibition.
The eminent artist-painters who so valiantly sacrificed themselves for
the cause of pictorial photography were Fred. W. Kost, John La Farge,
Kenyon Cox, Childe Hassam, Robert L. Henri, Douglas Volk, George R.
Barse, Jr., Alphonse Jongers, Edwin H. Blashfield, Will H. Low, Henry
Prellwitz, H. Bolton Jones, John W. Alexander, Wm. M. Coffin, Irving
R. Wiles, J. Francis Murphy, Walter Clark, Francis R. Jones, Dwight W.
Tryon, and Ben Foster. The only absentee, when the jury assembled, was,
we were told, William M. Chase.
After carefully examining the exhibition it seemed to us that but one of
two conclusions could be drawn : Either that the average of the ten thousand
prints submitted was far below the mediocre, if the four hundred prints, with
which the walls were literally plastered, were the best that this most eminent
jury of painters could find among the ten thousand; or, that even the best
of painter-juries are failures when they attempt to pass upon a medium
of whose history and technique they are utterly ignorant.
Our opinion, that photographers must be self-sufficient and must not
weakly lean for support upon the patronizing aid of other arts, is too well
known to be reiterated. But, lest we be misunderstood, let us explain once
more that no more than is the average painter a competent judge of what
ought to be admitted to a first-class exhibition of paintings, is the average
photographer competent to pass upon the merits of pictorial photography.
The exhibition, and everything connected with it, exemplified the wis-
dom of all but one of the recognized pictorialists of the world in refraining
from giving it support. Those who were responsible for the St. Louis
fiasco were the moving element in this “First American Salon at New York,”
which is now to tour the States.

The American photographic press is usually Philistine to a degree, and
not always to be relied upon for its accuracy. It has taken a view of the merits
of this particular exhibition virtually diametrically opposed to our own. As
50